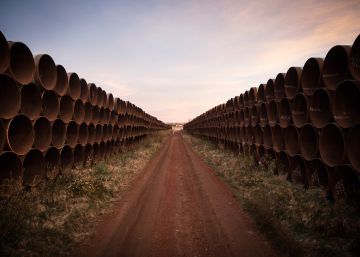 The battle of the Administration of Donald Trump To eliminate environmental regulations in the United States yesterday wrote a new chapter with the announcement of important modifications to the environmental protection law, which has been in force for half a century. The announced changes will reduce the requirements of environmental studies for large infrastructures, which will accelerate projects such as mines, pipelines, gas pipelines or airports. The initiative adds to other blows for environmental regulation such as cutting the pollutant limits of cars.

The argument to weaken federal regulations is to accelerate projects that can be paralyzed for years in court. "We want to build new roads, highways and bridges bigger and faster," Trump said. The decision "will eliminate bureaucracy that has paralyzed common sense decision making for a generation," said Interior Secretary David Bernhardt, who highlighted the "profound consequences of government inaction" by environmental regulation and said that This is "the most important deregulation proposal" of the Trump presidency.

The law (NEPA) was passed in 1970 at the first term of Richard Nixon, the first president to create a federal pollution agency, the Environmental Protection Agency (EPA). They have barely been modified. This is the first serious transformation of this regulatory framework that affects any project that has federal money. The plan now enters the allegations phase; There are 60 days to file arguments against. It will surely be denounced in court if it comes into force.

In recent years, when evidence of climate change has already reached an almost unanimous scientific consensus, the courts have understood that the protections of the law not only affect the immediate environmental impact, but that their contribution to emissions to long term. With this framework, large projects of polluting industries, such as drilling on public land, mines and pipelines, have been stopped or slowed down in court. The best known conflict was the Keystone Pipeline XL pipeline between Canada, Illinois and Texas. The modifications announced are aimed at breaking that connection between projects and climate change, which reduces the chances of opposition.

The Trump Administration's attempts to eliminate regulations and bureaucracy on environmental issues have been answered by municipalities, states and environmental groups in the courts and for now the balance is very negative for the White House. A study of Institute for Policy Integrity, from the University of New York, which tracks all demands, concludes that the Government has only won one of 40.

The change in the law expands the type of projects that are exempt from being examined with the NEPA criteria. The law will make it clear that environmental studies no longer have to take into account the "cumulative effects" of pollution, as dictated by jurisprudence, which gives free way to polluting industries to build respecting only the immediate environmental impact. In addition, it imposes a maximum term of two years for detailed impact studies and one year for the more general ones. According to the Environmental Quality Council - Office of the Executive - a complete evaluation takes on average four and a half years and occupies about 600 pages. The different departments of the federal government make about 170 studies of this type per year.

Donald Trump's policy has been defined by the effort to completely reverse the legacy of his predecessor, Barack Obama. However, in some areas such as foreign policy or environmental protection, there are flying consensus that have existed for decades, regardless of the ruling party. Trump started putting Scott Pruitt in charge of the EPA, who from the Oklahoma prosecutor's office had led a fierce campaign against that same agency. His successor is Andrew Wheeler, a lawyer who has worked as a lobbyist against regulations. Experts and the opposition have denounced that the agency created by Nixon from within is being destroyed.

An analysis of The New York Times December identified 95 environmental deregulation proposals by the Trump Administration in these three years of office. Of these, 58 had already been completed and 37 were in process.

Among the most important decisions has been to relax the pollutant limits of cars, as the manufacturers requested, and eliminate the California exemption to set their own limits. In addition, it has eliminated the limits to the emissions of the coal industry, leaving its continuity in the hands of the States. It is no longer strategic for the US to reduce coal as a source of energy. At the international level, Trump pulled the US out of the historic Paris Agreement that committed 196 countries to reduce their emissions.