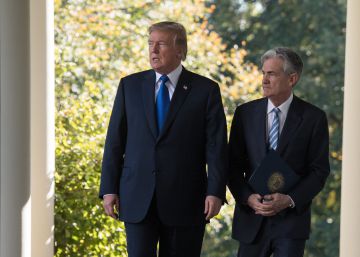 The president of the United States, Donald Trump, is convinced that the Federal Reserve will prove on Wednesday that he was correct when he criticizes the US central bank for having taken the interest rate hike "too far". The monetary authority of the United States he plans to cut the price of money by at least a quarter point After the two-day meeting that began on Tuesday. But the president wants to see an even bigger reduction. The Fed, he insists, "is quite wrong."

Interest rates have been between 2.25% and 2.5% since December. It will foreseeably be the first cut since the financial crisis, when they were left virtually at 0%. Trump began charging the Fed last summer. "I am very disappointed," he said when the first day of the meeting had just begun, "in the end it will prove that he was right."

The monetary policy normalization process in the US began at the end of 2015 with Janet Yellen at the head of the Fed. This Sunday, in a public intervention, her former president declared herself favorable to a small cut of a quarter point. He cited the uncertainty created by the tariff dispute with China, the growth moderation and low inflation. It was the blessing that his successor, Jerome Powell, needed.

"The economy is doing phenomenally well," says Trump, "would do better even if the Fed had not raised rates so soon or so much." The president even says that the gross domestic product would be advancing at a rate of 4%, his great electoral promise, instead of about 3% that was recorded in 2018. The Dow Jones index, he adds, would also be “10,000 points higher " "It was a big mistake," he reiterates when questioning Powell.

The Fed "raised" way too early and way too much. Their quantitative tightening was another big mistake. While our Country is doing very well, the potential wealth creation that was missed, especially when measured against our debt, is staggering. We are competing with other …..

In addition to lowering the price of money, the Fed's plan is to suspend the balance sheet reduction in September. Trump thus provokes Powell to take him to his land while the latest indicators show that the economy behaves better than expected at the June meeting, when the door to the rate rebate was completely opened, and question whether the cut is really justified.

The Fed members favorable to the cutout explain that it is done preventively and expect that there will also be a boost to inflation, which is several tenths below the 2% reference level. There are five members of the committee who, in their most recent public interventions, were nonetheless opposed to taking this step back because they understand that wasting ammunition for when the risk of recession is real.

It remains to be seen, therefore, what the intensity of the reduction will be decided, although the language used anticipates further cuts. The last internal survey indicated as possible at least two downward adjustments of a quarter point. The Fed insists that it modulates its strategy based on available data. In addition to the pressure of the markets and the president, it has that of the European and Japanese central banks with opposite strategies.