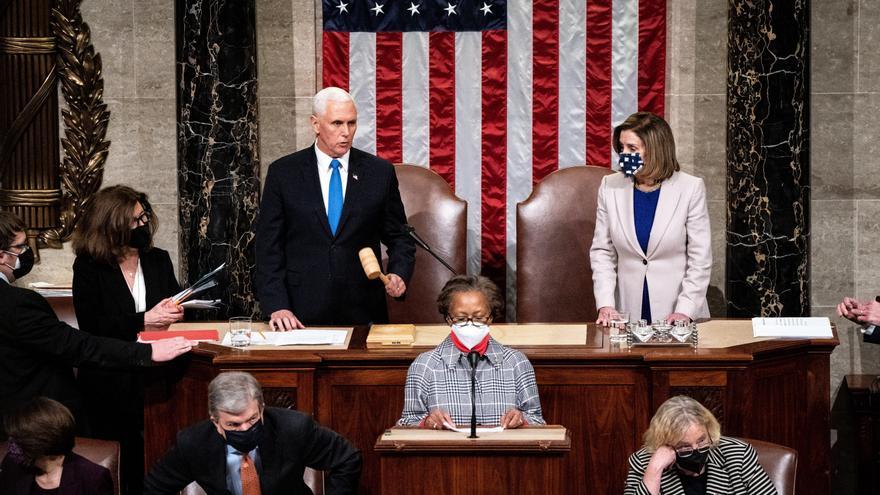 On August 9, 1974, President Richard Nixon – before the more than foreseeable triumph of the “Impeachment” – announced his resignation in an appearance at the White House and gave the witness to his vice president, Gerald Ford. The Watergate spy scandal – revealed by an arduous investigation by “The Washington Post” – had placed the Republican leader without options and both in the Senate and the House of Representatives there were already majorities (2/3 in the Senate and majority simple in Congress) to approve the removal of the US president. A lesser-known historical fact is that Nixon, within days of leaving the presidency, called one of his last loyal senators, Californian Alan Cranston, and blurted out: “He could still push a button and kill millions of people.” That same night, his Secretary of State, Henry Kissinger, and his Secretary of Defense, James Schlesinger, informed of the telephone conversation by the horrified senator and by the intelligence services, agreed to withdraw from President Nixon the control of the nuclear codes. The resolution – for obvious national security reasons – was made in the strictest secrecy and instructions were given to the Joint Chiefs of Staff that any order from the president on the launch of nuclear missiles should be endorsed – at a minimum – by the Secretary of State or Defense. The decision was probably correct, but after its revelation in the 1990s, multiple jurists have pointed out the obvious illegality of the procedure.

The events at the Capitol on Kings Day 2021 have already entered the history books. There are no precedents in the more than two hundred years of democracy in the United States of an assault on the seat of national sovereignty with the declared purpose – and achieved for a few hours – of preventing the certification of the result of the presidential elections. The seriousness of the events – in addition to the four fatalities and the fifty injured – have caused an unprecedented emotional impact in the United States. The citizens attended in amazement what President-elect Joe Biden defined as an “insurrection, not a protest.” This time even the leader of the Republican minority in the Senate – the until yesterday unconditional Trumpist Mitch McConnell – has joined, calling the incident a “failed insurrection” and a “criminal act.” However, despite its spectacular nature, the capture of the Capitol – precedents for the occupations of various state legislative seats already existed – should not surprise anyone inside or outside the United States. The logical conclusion of the heterogeneous Trump movement – an amalgam of populism, nationalism and right-wing extremism – was its radicalization and direct confrontation with the democratic system when it was no longer useful for its purposes. Both the candidate Donald J. Trump in 2016 and the already president in 2020 warned that he would not accept or recognize any result other than his own victory.

The Senate and Congress have finally been able to certify the electoral victory of the Democratic candidate. In fact, the violence unleashed in the Capitol has reduced Trump’s support: of 15 senators who announced that they would object to the results, only seven – among them the ineffable Ted Cruz, presidential for 2024 in all the pools – dared to take the step of questioning the electoral verdict. Pressed by the wave of national outrage – former Republican President George W. Bush and former Democratic Presidents Barack Obama and Bill Clinton lead the rejection of the assault on Capitol Hill – the White House has issued a brief statement committing itself to an “orderly transition.” However, at this point no one believes the word of President Trump anymore. The growing fear among elites – this time both Democrats and Republicans – is that Donald J. Trump, faced with the prospect of being prosecuted – and convicted – after his departure from the White House, will decide to make irreparable decisions. The most alarming thesis at this time in the US is not new – it was discussed in a meeting in the Oval Office in December -: a high-range military operation against one of the Axis of Evil countries (Iran and North Korea have all ballots) with which the White House could justify the postponement of the presidential inauguration ceremony on January 20.

Faced with this possibility, the “deep state” – as QAnon’s conspiracy followers would define it – has been activated. The incoming Democratic administration and the top of the Republican Party are unwilling to go to war with a foreign power – nuclear in the case of North Korea – amid the greatest institutional crisis in American democracy. In Washington there is already open talk of an “impeachment express” that removes the outgoing president from office. Another option on the table – a group of Democratic legislators has already requested it – is the application of the 25th amendment to the US Constitution, which makes it possible to declare the president “incapacitated” for office. It should be promoted by Vice President Mike Pence – described as a “coward” by Trump for participating in the results certification session – and a majority of members of the Cabinet. The scarce two weeks in office – with the omnimous power of the Presidency – that this president still has left are too high a risk for American democracy. It is clear that the institutions in the US will act in the next few hours. The only question is whether they will do so publicly through an “impeachment express” or the 25th amendment, or more discreetly by limiting in practice – as in 1974 with President Nixon – the current powers of the (still) tenant of the House. White