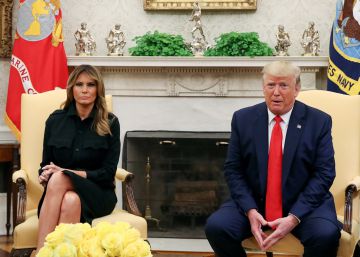 The president of the United States, Donald Trump, announced on Wednesday that his Administration is considering banning electronic cigarettes with flavors after the increase in serious lung conditions that have already been charged at least six lives in the country. "It's causing a lot of problems, especially vaping among innocent children," the president said in the White House. Sitting in the Oval Office with the secretary of health, Alex Azar, and the acting head of the medicine and food agency, Norman Sharpless, Trump admitted that there was a problem with electronic cigarettes and that something had to be done about it. ".

The agency dedicated to disease prevention (CDC) advised this week not to consume these products after registering the death of six people in recent months due to lung diseases, the last one was confirmed on Tuesday in the State of Kansas.

The head of US health said that the FDA Drug Agency, would propose a plan in the coming weeks to withdraw the vast majority of cigarettes with flavors that are not a product of tobacco.

The first line of research focuses on marijuana refills sold on the black market. One of the specific hypotheses that is considered as the cause of the illness It is a contaminated additive that contains vitamin E that is added to some products that allow you to consume THC – tetrahydrocannabinol, the psychoactive component of marijuana. More than 450 people have had to be treated urgently in hospitals for respiratory problems.

In the last case in Kansas, the victim was an adult who already had health problems. The authorities, as in other cases, avoid detailing the type of product used, whether it was an electronic cigarette or a vaping device. It is the fourth death reported in less than a week. Those registered in Minnesota and California were also adults, who suffered from some type of chronic lung problem.

The success of electronic cigarettes in the United States in recent years, and especially the Juul brand among young people, has caused a late but increasingly severe reaction from the health authorities at the federal level, but also at the local level in the state.

The Trump administration launched investigations into Juul, based in San Francisco, and announced last year the next ban on the sale of refills with caramel flavors online, which attract the youngest. Under pressure, Juul has taken steps to prevent the sale of its products to minors both online and to its distributors.

At the Trump meeting held in the White House with the health authorities was also the First Ladies, Melania Trump. "He has a son," the president said about their son, Barron. "That is the reason" why she is involved in the issue, the president explained about his wife's presence during the meeting about the vaping.

Melania Trump said Tuesday "deeply concerned" about the growing use of these cigarettes in the United States. "I am deeply concerned about the growing epidemic of the use of electronic cigarettes among our children. We need to do everything possible to protect the public from tobacco-related diseases and deaths, and prevent electronic cigarettes from becoming a way of access to nicotine addiction, "wrote Melania Trump on her Twitter account.

I am deeply concerned about the growing epidemic of e-cigarette use in our children. We need to do all we can to protect the public from tobacco-related disease and death, and prevent e-cigarettes from becoming an on-ramp to nicotine addiction for a generation of youth. @HHSGov

The 10 most spectacular aerial photographs of Spain through Google Earth