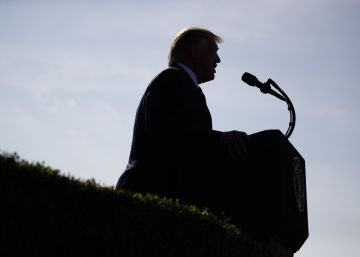 He began, first, criticizing the Federal Reserve for the latest interest rate rises. More recently he raised the pressure asking for a cut of a percentage point. Donald Trump, just a week after the next meeting of the central bank of the United States is held, goes further and now advocates that he return the price of money to 0% or even lower.

The president went to Twitter before the opening of Wall Street to express his claim, with a double message questioning again Jerome Powell's strategy at the head of the monetary authority. "The Federal Reserve should take our interest rates to zero (which is capitalized), or less." And he justifies it by saying that "at that time we should start refinancing our debt."

Trump's reflection is not accidental. China is the main creditor of the United States. Beijing could use the retaliation weapon to stop buying debt or to get rid of it. The president, however, already downplayed this eventuality by saying that interests are so low, that the economy could support it. But for that he needs the Fed to lend him a hand.

"The cost of interest could be much lower," he says, with the phrase all capitals. He points out that the US has a large currency, power, a good balance and cites low inflation as an argument for the cut. "The US should always pay the lowest interest," he says, regretting the "naivety of Jay Powell for not letting us do what other countries do."

…. The USA should always be paying the the lowest rate. No Inflation! It is only the naïveté of Jay Powell and the Federal Reserve that doesn’t allow us to do what other countries are already doing. A once in a lifetime opportunity that we are missing because of “Boneheads.”

The US debt is around 22.5 billion dollars. During the presidency of the Republican, it grew by 13% or about 2.6 billion, partly due to fiscal reform. The cost to the taxpayer that generates the interest will amount this year to about 540,000 million, a new record despite the low price of money. Moody´s warns that what the president proposes is not viable.

It is also not clear how the idea of ​​refinancing could materialize and if, as the president suggests, longer-term issues could be established. Theoretically, experts agree, it would be good for the US. The problem, they add, is that there is a contractual relationship with investors. "This is not a mortgage," Moody's insist, "and will cause interest to rise."

Trump, however, believes that "a unique opportunity is being missed" by the "hollow heads" that govern the Fed. The president already wondered last week how it was possible he had nominated Powell to run the central bank. He accuses him of being the biggest burden for the growth of the economy at this time. The interest rate has been between 2% and 2.25% since July.

Jamie Dimon, CEO of JPMorgan Chase, the country's leading bank for assets, does not see rates in the US return to 0% again. Mainly because the economy and, in particular, consumption are moving solidly. Donald Trump, however, believes that this situation causes other major global economic competitors to be taking a cut with lower rates.