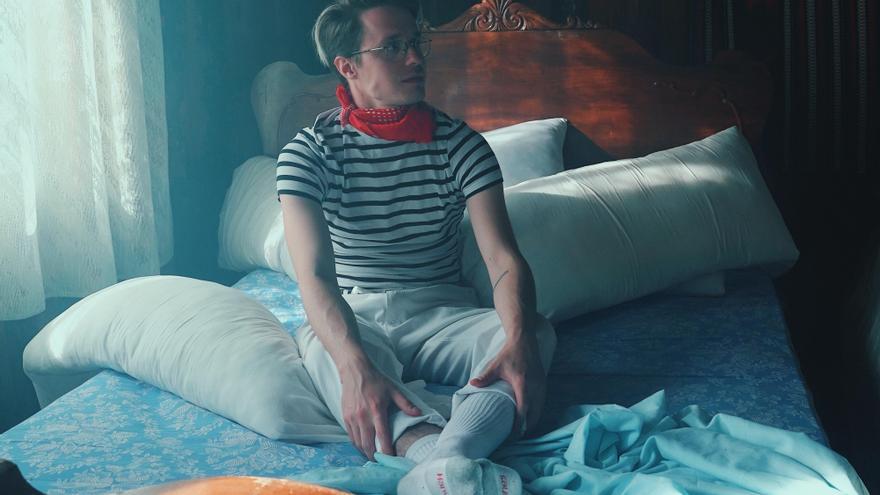 New York, Jul 29 (EFE) .- “I’m honestly myself. I’m not trying to get away from or get closer to a stereotype,” Spanish rapper Tristan Simone tells EFE who, completely removed from the aesthetics of hip hop, opens step into the complicated panorama of US music, and perform this Thursday in Chicago at the popular Lolapallooza festival.

“I have always loved taking lyrics very seriously, telling difficult stories and exploring politics, my sexuality as a homosexual artist, a lot of things that I think do not exist in hip hop and that I would like to expand,” explains this 23-year-old from Madrid. years and real name Arturo Fernández Durango.

Although the blonde Nick Carter hair, the delicate glasses and the formal shirts with which he appears in many of his publications on social networks give the young musician an air of seriousness, his songs have an unmistakable urban character and have taken him , even before having released his first album, to the stage The Grove at Lolapallooza.

There, a good part of the hip hop artists will perform in this popular festival, where this year names such as Foo Fighters, Post Malone or Tyler, The Creator, and where they have passed in previous editions The Strokes, Ariana Grande, The Weeknd or Artic Monkeys.

“I’m with a pretty big mental cocoa. (…) It all seems so surreal to me, in the middle of a pandemic in the US to be able to play at a festival like this,” he confesses hours before his concert.

Tristan Simone discovered hip hop when he was 7 or 8 years old, when he “fell in love” with the genre because of the opportunity he saw to fuse styles and genres that were not common at that time.

For this reason, his music has remnants of jazz, gospel, soul, rock and also the flamenco rap subgenre popularized by Rosalía or C Tangana, something that he believes is necessary in hip hop, where he considers there is little diversity, “not only musically, but in terms of personality “.

He speaks of this lack of variety in hip hop, for example, in his song “Ironic”, in which, in a humorous tone, he highlights the repetitiveness and superficiality of the lyrics of the songs, in which the rappers boast of their “false fame” and his “paid groupies”.

“I think it is important to find humor in the situation. I love to provoke a little, but provoke with flavor, culture and intelligence,” says the rapper, who has been trained at the Berklee University of Music (Boston), the university largest music hall in the world.

The prestigious institution quickly recognized the talents of Tristan Simone, who became the third rapper to be admitted to Berklee, a “very old-fashioned and very disciplinary” school.

The Spaniard, who because of his father’s work has lived in five different countries, recognizes that he has not grown up in the typical environment of hip hop artists, who have historically come from impoverished neighborhoods with high crime rates in the United States. .

“I have not grown up like the stereotypes of hip hop. I do not come from the neighborhood, I do not wear low pants or anything like that. My story is very different and I like to be quite honest with that,” he says.

He is also very aware that his homosexuality makes an important difference: “I think that in a certain way being a gay rapper has a lot to do with my way of expressing myself, which I don’t think is the same as others, but there are more and more diversity”.

His album “The Wounded Coyote”, which he plans to release in August or September and which he recorded in a room with a computer, a microphone and “a lot of passion”, is the one that he assures has given him the opportunity to perform at Lolapallooza.

“The story we wanted to tell was that when the world stopped, we didn’t, and I think that helped them a lot to say that they loved me,” explains the musician, who points out that he is an independent artist and therefore does not have the help from a record company.

Tristan Simone, who has “stolen” the last name from the artist who “changed his life”, Nina Simone, now lives in Los Angeles, and despite having spent a good part of his life in different countries, he clings tightly to his Spanish roots.

“I have lived alone in Spain for two years, when I was born, but I have spent every summer and winter in Madrid. I am pure Spanish,” he says with a laugh.