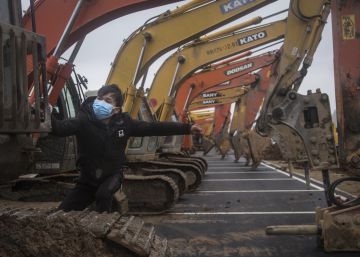 In Wuhan, the pandemic and rumors go hand in hand. An internet blackout, a spraying procession, a contagious virus like a nuclear disaster: all as imminent as imaginary. In the current situation, only what can be seen with the eyes escapes the panic of social networks or the control of the authorities. Therefore, the wheels of this tiny rental bike turn in the direction of a point on the map 25 kilometers outside. There, what would seem the most obvious hoax is almost a reality: a hospital out of nowhere in less than ten days. With this construction – which is followed by a second one -, the government intends to decongest the city’s medical services, overwhelmed by the number of patients and with diminishing resources. Its walls will house a thousand of those infected with the coronavirus 2019-nCoV, which according to the latest figures already leaves 49 dead and more than 2,000 infected.

The streets are still deserted: Wuhan wakes up in quarantine for fourth consecutive morning. Today is also the first day in which the movement of private vehicles on roads is prohibited. With this measure, the government seeks to limit the maximum mobility of citizens, a majority of whom have opted since the beginning of the week to shelter themselves inside their homes. From now on, to move around this city, with an extension equivalent to 14 times Madrid, only two feet or two wheels are worth.

Along the crossing, which soon leaves the urban scene in favor of the highway, several dogs can be seen, with collar and hair taken care of, wandering alone in the middle of nowhere. Concern about possible contagion has caused a wave of pet abandonment in Wuhan.

After several kilometers, about twenty workers appear on the shoulder. They cover the entire spectrum of ages: some are young imberbes, others are old with wrinkles. They are waiting for the van that will take them to the work area. They wear yellow helmets and orange reflective vests. Some carry small rolled up mattresses, which suggests they will sleep somewhere nearby. Operators like them are charging up to three times their usual salary, but there is no respite in the building of the new hospital.

Everyone seems to know immediately that they are dealing with a journalist. One of them instructs his classmates to “not open their mouths until the boss comes” and represents a teenager who is willing to confirm that I am headed in the right direction. After a little talk he softens, and ends up recognizing that they are aware of the importance of their work, but “the conditions are very hard.” It stops there: it will not give more details.

Ten kilometers before arriving at the destination, security checks begin. A group of police officers stop any approaching vehicle on the road – outside the city there is a little more traffic. Incredibly, no agent pays attention to the bike lane. Just keep pedaling with your eyes straight ahead.

From that point, only large construction trucks and some ambulance travel the road. There comes a time when trucks crowd in a queue of hundreds of meters. After three hours of pedaling, here is the road that leads into the enclosure. Hundreds of people are concentrated there, many workers waiting for their time to enter and engineers whose vests are written in the name of the firm responsible for the work: Zhongjiansanju, also known as the China Construction Third Engineering Bureau and a subsidiary of the state-owned China State Construction Engineering, the first construction company in the world.

“The works are progressing even faster than expected,” said a head of Zhongjiansanju in exclusive statements to THE COUNTRY on condition of anonymity. The hospital will be built at full speed thanks to the use of prefabricated blocks, following the model of Xiaotangshang, the complex that the government built in Beijing in 2003 to deal with those infected with SARS, an epidemic that caused more than 700 worldwide. The mortality of patients treated there was limited to 1.18%, compared to the usual rate of 9.6%. “Yesterday we finished the design and the foundations. The main job for today is the electrical installation and water, ”he says. “I think we will finish at least one day ahead of schedule. [el 2 de febrero en lugar del 3]”

When a security guard alerts by telephone the presence of a laowai, “Guiri”, it’s time to leave. In view of the other three hours of cycling, the vision of an available taxi seems like a mirage and, in the face of gestures, it slows down. The bicycle, faithful companion, is abandoned on the side of the highway: blessings of shared use. “A few taxis have permission to drive, to guarantee minimum services in case of emergency,” explains the driver. Asked about the dangers of working with the virus expanding so fast: “Every day when I return home, before crossing the door, my wife fires a disinfectant spray on me. Only then can I enter. ” After a moment of silence, he concludes: “It is likely to fall ill, but I think we will be safe.”

Sunyang, manager of a gasoline outside, says that there have been no cars in the morning. The government has reinforced the new road blockade with the refueling ban for cars with local registration. Although there are exceptions. One of them are trucks like the one next to one of the suppliers. He comes from a nearby town in the province of Hubei and “inside he carries newspaper articles, especially masks,” explains his driver, a young boy.

One of these trucks was referred by the manager of a downtown hotel this morning when he commented that “the government has established a special channel for supplies.” In Wuhan not only food is not lacking, but even the price has not increased. “The government tries to make people live a normal life as much as possible, only with the precaution of leaving as little as possible and not leaving the city. The most important thing is not to panic. ”