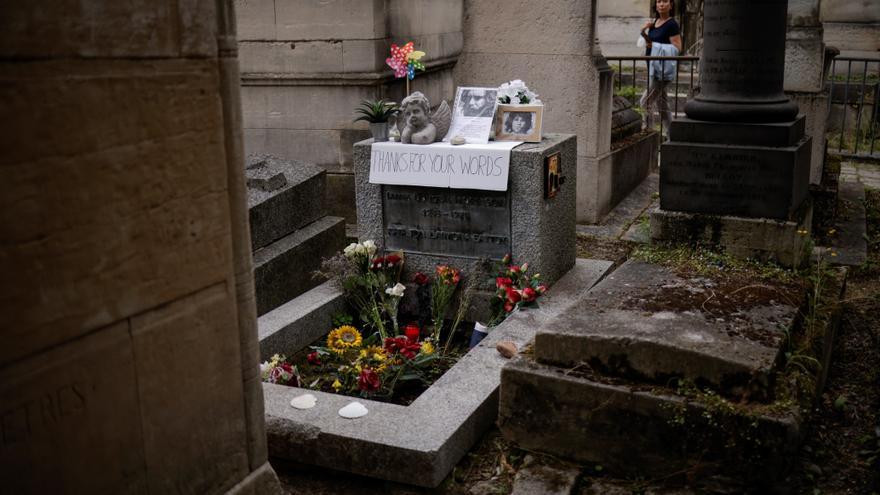 Paris, Jul 3 (EFE) .- French, German and Spanish admirers came this Saturday to the grave of the musician and poet Jim Morrison, in the Parisian cemetery of Père Lachaise, to pay tribute to this myth and reference of rock, who died today fifty years.

“Your sung poems will always make us delirious. Your demons have come looking for you, but we can never forget you. The doors will never close, because I never get tired of listening to your songs”, recited Catherine d’Alençon and Bruno Gacon at the foot of the Morrison’s grave, in which they left a bouquet of flowers and a picture frame.

The fences that surround the grave to protect the privacy of the place and prevent people from getting too close were witness throughout the morning of the arrival of hundreds of followers, some of them wearing shirts of the artist and his group, ” The Doors “.

“We have come to experience this event, we have not come to see Paris; we have come to celebrate the fiftieth anniversary with Jim Morrison, our idol,” explained to Efe Mamen Langa and Carlos Sánchez, who came from Barcelona by car for the occasion.

Both recognized that this “dream” they had planned to do for quite some time, also for the 25th anniversary of his death, since from a very young age they began to “enchant” Morrison. But it has not been until 50 years have passed when they have decided to definitely comply with it.

The song “LA Woman”, which he dedicated to his partner, Pamela Courson, is one of those that Langa highlighted, although he admitted that they all have something special because of the messages he transmitted at that time.

“He has been a reference both personally and musically,” says Pere Romeu, another fan from Barcelona, ​​who was already two years ago in the cemetery and who today wanted to repeat to share the memory of Morrison in company.

“A short but intense life,” he said in relation to his idol – who died at 27 – Romeu, who acknowledged that his hair still stands on end when he listens to songs like “Riders on the Storm”, from his album “LA Woman “,” one of the best albums in history “.

Morrison’s music was heard at the foot of his grave on this commemoration day that commemorates the death of the artist in a flat in the Le Marais district, in Paris, where he had moved to try to leave his alcoholism behind and be breathed in with the spirit artistic city.