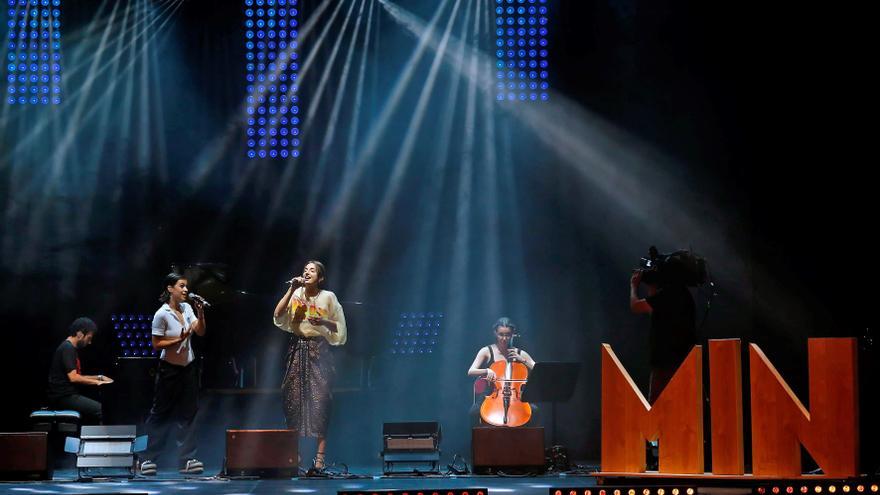 Valladolid, Jun 16 (EFE) .- The indie-rock band Triángulo de Amor Bizarro and the electronic sounds of Delaporte have left their mark on the XIII edition of the MIN Awards, which the independent recording industry grants to its best ambassadors from the past year, when the winners of the main recognitions were raised, in a gala that has not forgotten the blow that the covid has given to the music sector.

With four nominations, finally Triángulo de Amor Bizarro has won the recognition for the best album of last year with its fifth self-titled album and with the one with the best production, while Delaporte has obtained three of the five statuettes of the contest: best video clip, best electronic recording and best artist.

The Basque band Belako, which started out as a great favorite with six nominations, has finally only obtained the recognition for 'Best Rock Album' for 'Plastic drama' and, during the reception of the award, the band took the opportunity to break a spear in favor of Musicians: "We have a responsibility to unite and protest for decent working conditions," said Lander.

However, the main allusions of all the artists have revolved around the hard year that all of them have had to live through due to the covid pandemic, which has caused the cancellation of their tours and concerts and which, in short, has altered all your projects.

Meanwhile, Rigoberta Bandini has won the award for 'Best Song', for 'In Spain we call it loneliness' and also for the best emerging artist, for whom she has reflected on the surrealism of the situation, when just a year ago she gave she gave birth to her son and her entire project was born from her computer and thanks also to her husband.

Finally, the podium of the great prizes has been completed by the Irish Fontaines DC as the best international band, for their second work 'A hero's death'.

The self-confidence of the presenter Rodrigo Cuevas has served as a common thread in a gala in which there have been references to the pandemic and the disparate management of the Communities in relation to culture: "You see, outside of Madrid the theaters are also open" , has ironized the presenter, who thanked all those who decided to "keep the culture alive" during the pandemic.

Nor has he overlooked the first outing of Madrid for these awards, which have landed in "Spain emptied" to highlight the connection between 'indie' music and this depopulated Spain, because "what is more 'indie' what not to have help? ".

By styles, the award for 'Best Classical Album' has gone to an emotional Alba Ventura, for 'Mozart piano sonatas Vol. 1', the one for Flamenco has gone to Astola and Ratón, for 'Rock de palo' and that of ' Best Pop album 'has been for the brand new Gins, who have recognized that the pandemic caught them "taking off."

"We wondered whether to delay the release of the album, but we thought that people needed color and joy in these shitty times that we have lived through," said Magüi, who has attributed "healing powers" to music and culture in general. .

Alizzz, who will be at the Latin Grammys in November, has acknowledged after receiving the award for the best recording of urban music, that his heart will always be linked to 'indie' music, since he is "the son of Los Planetas and Radio 3 ... and now from the MIN "

For their part, Jorge Pardo and Gil Goldstein, with 'Brooklyn sessions', have won the award in the Jazz category and María Rodes, with 'Lilith', for their root music.

In the other co-official languages ​​of the State, Néboa has won the best album in Galician for their album 'A reality enganosa'; Zetak the one for Basque for 'Zeinen ederra izango den' and the one for Catalan has been for Renaldo & Clara, for 'L'amor fa calor'.

Finally, the 'Mario Pacheco Honor Award' has gone to the legendary journalist Julio Ruiz, who has dedicated emotional recognition to his mother, who "inoculated him with the poison of radio and music" and the design has been for Raw Pepper, for '7 tinnitus'.