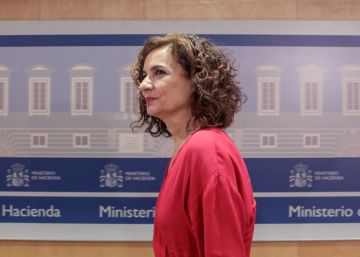 Regional councilors have reached the Fiscal and Financial Policy Council (CPFF) on a war footing. The representatives of the autonomous communities have expressed their demands before the start of the meeting, which started at 16.30 in Madrid. They ask the central government to return the 2,500 million VAT owed to them for a 2017 monthly payment that remained in the air when the settlement system changed. The Treasury, on the other hand, has transferred to them that this money, now, cannot be returned to them. And in return has proposed to relax the deficit targets for this year by two tenths, as EL PAÍS advanced, and other measures to avoid tensions in the regional treasuries.

But the communities have made it clear that they do not want more indebtedness and many of them do not rule out reaching the courts. Neither governed by the opposition nor related to the Socialist Government. At least this was the regional tone of the regional councilors before entering the meeting with the Minister of Finance and government spokesperson, María Jesús Montero.

“I don’t like to link the deficit path with VAT money,” Juan Alfonso Ruiz, Minister of Finance and Public Administration of Castilla-La Mancha, governed by the PSOE, settled before meeting with the minister and her regional counterparts. And it has once again threatened to go through judicial proceedings if the central executive does not offer a solution. “Last week authorization has already been given to start the paperwork,” he said.

“We want to be paid VAT”, said the Minister of Finance of Castilla y León (PP) Carlos Javier Fernández. “We don’t want more debt, but funds to finance public services.” And, like other advisers, he regretted that the President of the Government, Pedro Sánchez, promised more margin to Catalonia in the meeting he held this Thursday with Quim Torra. “[Ha sido] a privileged negotiation with a single community whose advisor will not even come, “Fernandez lamented.

The Treasury has decided to relax the target of the deficit for 2020 from the 0% foreseen by the previous path designed by the PP and still in force – in the absence of new Budgets – to 0.2% by 2020. These two tenths correspond to about 2,500 million euros, a figure similar to the money that the State owes to the autonomies for the monthly VAT of 2017 that did not enter them. Montero has also transferred that it will not take into account part of the deficit attributable to VAT. In other words, it ensures that this amount will be discounted to analyze whether the regions have complied with the budgetary rules. The risk is that the defaulting regions end up having to present an economic and financial plan and may be forced to adhere to the extraordinary liquidity mechanisms set to be financed.

Montero, who on more than one occasion has insisted that there is no longer room to return VAT to the communities for having passed the legal period of two years – and he recalled that the Budgets they had designed for 2019 were anticipated and that They were knocked down in the Cortes-, it has advanced that the provisional data available to the ministry suggest that in 2019 the regional deficit closed at 0.5% of GDP, compared to the 0.1% expected by the path of stability in force. But, discounting the VAT effect, it has clarified that this percentage would remain at 0.3%, so the effort to reach the 0.2% target of 2020 will be one tenth.

Sources from the Ministry of Finance of Extremadura (PSOE) say that the regional government will also request that a differential deficit target for the regions be established during the CPFF meeting. And they insist that the reduction in the deficit target does not compensate for the decrease caused in the Treasury by the monthly VAT not received.

“We don’t want to generate a deficit,” said Juan Bravo, Minister of Finance, Industry and Energy of the Junta de Andalucía (PP-C’s), before entering the conclave. “That money corresponds to the Andalusians who have paid VAT.” Andalusia is one of the communities with the most bulky pending bill due to the lack of refund of this tax: 537 million euros. But this is not the only reason for tension between the Board and the central government: at the end of last year the Ministry of Finance informed him that, for breaching the budgetary rules, he will have to be re-financed through the Autonomous Liquidity Fund ( FLA) If you want to continue benefiting from the line of cheap credits granted by the Treasury, which means presenting an adjustment plan to have a stronger control of Madrid over your accounts.

Also the words of the Minister of Presidency and Finance of Murcia (PP-C’s), Javier Celdrán, have been hard. Before entering the meeting, he assured that the lack of money due to VAT “generates tensions in the Treasury” that penalize them, and that the intervention of payments to its suppliers that the Treasury has established a few weeks ago for paying late bills is the effect of this situation, which has been labeled “political vendetta”.