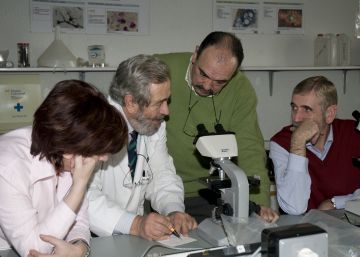 José María Gálvez is not just any college student. After a lifetime as a senior mining engineer, he decided to follow in the footsteps of so many others in his maternal family and enrolled in law. Today, at 85 years old, he continues to do the odd project and is studying second in Law at the University of Alicante, and although he is clear that he will never practice, he is determined to finish it: “I prefer it to retire and start playing cards with another three, because that’s when I die right away. I continue to bathe in the sea in winter, and I still practice mountaineering ”, he says in a telephone conversation. In one of the oldest societies in the world, José María is one example among many of that vital talent and knowledge that is reluctant to accept retirement as a permanent retirement.

“Now you are young with 50 or 60, and even with 80 you see yourself with the strength to do things,” says Marcos Roca, director of the University for the Elderly of the Complutense University from Madrid. The program he coordinates arose from a joint initiative with the Community of Madrid in 1999 so that a hundred people who had never studied (or who had stayed in Primary) could access the University. And although the institutional support has already disappeared, the Madrid institution continued betting on this model until it managed to exceed 2,500 students in the 2019-2020 academic year, and build not only a comprehensive educational model, but a whole network of intergenerational and intercultural cultural and social activities of which everyone is more than proud.

It is, of course, not the only case. Like the Complutense, most of the universities have developed some type of academic program aimed at the population over 55 years of age, in addition to the traditional access for those over 25 years of age. In most cases, it is an unregulated but increasingly important training that appeals to their needs and interests, helping to rescue an entire life experience and even revert it to society. But adult training is not logically limited to the university level either: “A long time ago it had to do with literacy, and it was aimed at people who had dropped out of the educational system. But now it revolves around the principles of permanent and inclusive education, for everyone, with an education that gives you professional and social skills, etc. ”, explains Andrés Payá, doctor in Pedagogy and tenured professor at the University of Valencia.

Is it too late to study?

“Where do I go to college at my age!” “My time to study is over.” “I would have liked to study History …!” Despite the topics and self-imposed barriers, the experts are clear: there is always time. “It is true that cognitive and physical abilities decrease over time, but it is directly proportional to the development of other abilities typical of mature ages. In the end, everything is a matter of motivation and personal decisions, because if motivation is powerful, you can do whatever you want ”, says Mayte Moreno, psychologist and Director of Mentalis-Psychology. “Another of the competencies that are developed when they are older is the ability to interweave knowledge. Young people who study mathematics in ESO, normally do not go beyond the formulas of turn, while an adult studies perhaps more slowly, but in a comprehensive way, better understanding what he studies ”.

In any case, it is a very heterogeneous segment of the population with very diverse interests. Some may seek, after 50, training to help them update and improve their prospects for employability. Others, out of need or interest, may seek to obtain an ESO or Baccalaureate degree that they could not obtain in their day, through the Adult Education schools (EPA). Or those who, once they have reached retirement, decide to go back to university to continue growing through quality training. “As long as one is aware of their real situation and the adaptations it requires, studying at a mature age can provide great internal satisfaction, mental activation, happiness or self-confidence,” adds Moreno.

In one way or another, “adult education is an educational action specifically designed, because adults do not think the same, nor do we have the same reasoning or motivations,” recalls Payá. And, in some cases, they play a fundamental role in social cohesion and inclusion: “Society has been advancing but they have not had the opportunity to update themselves, and therefore they cannot be citizens at the same level as you and me. We are talking about language learning and another series of competences, such as digital, which are the gateway to other rights such as the right to health (simply to ask for a medical appointment or do searches on the Internet) or to job”.

When Josefina Aránguren retired, after 42 years dedicated to teaching Language and Literature in the community of Madrid, she decided that it was time to take care of her great pending subject: English. She has been involved in work for four years (now she is 69), and she is clear that, at the very least, she has to First. “I read a lot, I write stories … I did not want to abandon that intellectual part,” he says by phone.

Each university, a model

The profile of a university student over 55 years of age could be adjusted to these characteristics: female, aged between 60 and 69 years (retired or early retired) and with previous training. Those who retire today in little or nothing are similar to those who did 20 or 30 years ago, and there is an increasing demand for high-quality training content. However, as it is a non-regulated training, each university has developed a different model, either including training itineraries on a very diverse subject or independent courses.

The academic program of the University of Valencia, Nau Gran, offers nine training itineraries of three courses each, while UNED Senior It teaches 30-hour courses with a very flexible theme that includes issues of local impact and that depends on each campus: “We have some thematic blocks, and within them, each campus proposes each year the subjects that they want to offer to their own students. The programming of Palencia, for example, has nothing to do with that of A Coruña ”, explains Silvia Barreiro, deputy vice-rector for Permanent Training. Digital update, languages, agriculture, local heritage, nutrition … Up to 7,800 students (and 14,000 enrollments) participated in the 2019-2020 academic year, 20% more than the previous year.

For its part, the Complutense University for the Elderly has developed a program that combines Humanities and Sciences subjects over four academic years, as well as a second cycle where students can train indefinitely thanks to a wide catalog of monographic courses. But its concept goes much further, and has evolved over the years to develop a complete network of cultural activities with a broad social scope. Among all of them (cultural visits and trips, a radio, clubs, cooperation initiatives, international exchanges or the incorporation of the elderly into science, through the Citizen Science initiative) highlights Solidarity Network, an NGO located in the Madrid district of Villaverde in which young people from the master’s degrees and seniors from the program work with immigrant children and adults, teaching Spanish to foreigners, offering school support to high school students or nutrition workshops or active job search . “If you have human capital, a potential in front of the eyes, and the possibility of extending the benefit to others, it not only affects that you will still benefit more, but that the social work that I do with you will be extended to others. It cannot be wasted ”, explains Roca.

“The program for the elderly makes them get involved in society, and they also collaborate in projects of other associations. There are always people willing … It is about taking advantage of what it is worth, it is as simple as that ”, adds the academic from Complutense. Visits to a museum, to the mountains of Madrid, accompanied by a professor of Biodiversity or even to the theater, where they took about thirty children to see The Lion King. But it also has very positive effects on their social relationships. “There is the magic, again, of making friends for life. So much so that some have been together for twenty-odd years, who have traveled the world, who have gone to live together … Friendship is a very important asset, because after a certain age it is very difficult to make friends ”.

For Roca, the university is no longer a place of instruction only for young people, and has become an intergenerational space. “It is unstoppable. In 20 years, it will be a totally different university, and although in Europe yes, in Spain you don’t see much. He continues to look at himself with a certain paternalism; The real social and educational effect that it will have is not intuited. It is a geographical question ”. Difficulties that are sometimes seen within the academic institutions themselves, when they find it difficult to access certain spaces. “What is difficult, and it is a thorn that brings me down the street of bitterness, is the conscience of some faculties. There are spaces that are available, but there are reluctance and sometimes we have difficulties to access (and I know that it does not happen only in the Complutense). Because not everyone understands that older people can be in university, as happened at the beginning with women ”.

Population aging, which, in general terms, is a problem for any society is also an economic and social opportunity that opens up numerous possibilities, as stated by Ana Margarito, director of 60m a lot +, a platform aimed at senior citizens. Its priority is to “value the generation that with their work and effort has built today’s society, in addition to taking advantage of the economic opportunity that this segment of the population represents, and that can be one of the pillars that serve to to reactivate an economy so hit by the pandemic ”. The platform serves as a meeting point for an elderly community that has little to do with that of 30 years ago: “Life expectancy in Spain has doubled in just four generations, and according to INE data from December 2020, 65-year-old men will live 19.52 years longer, and women 23.4 ”.

“We have to highlight the situation of discrimination or ageism that many people are suffering just because they have reached an age. Ageism is another of the scourges that affects this segment of the population, which we are assuming as something normal but which is still just another discrimination, such as sex, gender or race ”, says Margarito. “At 60ymucho + we are convinced that, if the different generations know the needs of the rest, empathy will increase and it will be easier to build more just and sustainable societies. And for this, it is essential to work together giving each one their best ”.