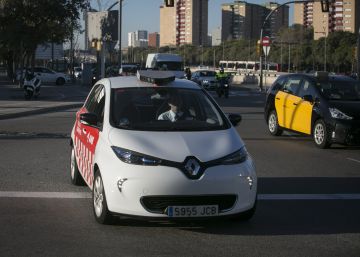 Barcelona lives on Wednesday the first day after the Christmas holidays, with full activity and children back to class, and with the Low Emission Zone (ZBE), which prohibits the circulation of the most polluting cars, running. However, the absence of fines for offenders has minimized its impact, which has been imperceptible: the City Council has reported that traffic on Wednesday has been the same compared to January 8, 2019.

Only if traffic is compared with the average traffic of last November, it has been reduced by 2.4% in the interior of the city. Neither the subway nor the commuter trains have seen passengers increase. A normality that the mayor’s government Ada Colau interprets with “caution” and says that it is early to assess the effectiveness of the ZBE. From now on, it will compare the data for entire months to make them more reliable, he announced.

The Councilor for Climate Emergency, Eloi Badia, has admitted that the cameras that control the restriction “many” vehicles are detected driving without a DGT label, which are prohibited from traveling. In addition to 36 fixed cameras located in the accesses, a vehicle of the Metropolitan Area of ​​Barcelona circulates to detect violators. Badia has also indicated that “it is possible” that the absence of fines until April does not allow to see positive results. The councilor has failed to attribute to a single cause the low impact of the ZBE and has argued that “there are many unknowns to be resolved: how many polluting cars will be affected by moratoriums, to what extent there is a renewal of the current fleet, if people drive because he doesn’t fine … “

The Barcelona City Council has celebrated that almost 6,000 people have taken advantage of the possibility of canceling their old cars in exchange for a free transport card and unlimited for three years. But for now the forecasts of passenger increase in public transport.

The first car sales data at the end of last year published last week indicated that during the last quarter of 2019, sales grew 20% on average in the five municipalities affected by the ZBE, according to the Motor Guild and Fecavem, which group dealers. In the absence of such up-to-date data on the second hand, the Guild also pointed to a rise, in November, of almost 10% in Catalonia.

The ZBE comprises 95 square kilometers (including Barcelona, ​​two other municipalities and parts of two more) where cars and motorcycles that lack the environmental label of the DGT, the most polluting, cannot circulate this year. In 2021 the restriction will be extended to public transport vehicles and merchandise. For people who want to travel on time with a polluting tourism, you can request up to 10 permits per year.

On the complaint that on Tuesday announced the Platform of People Affected by Circulatory Restrictions (PARC) against the ordinance regulating the ZBE, Badia has considered that the veto to the polluting car “is proportional to fight against pollution” and that “without losing its purpose, it was done in a way that was a passable step. ” There are exemptions for groups such as freelancers who depend on their car to drive or for people who for health reasons must go to hospitals frequently or cannot travel by public transport.

A committee of scientists and health experts will be in charge of evaluating the effectiveness of the ZBE. A group that, in addition to experts from the Barcelona City Council, the Metropolitan Area and the Generalitat will integrate scientists from the city’s Public Health Agency, and the ISG Global and IDAEA institutes of the CSIC.

The Councilor for Health, Gemma Tarafa, has argued that the ZBE “will have an effect, because what generates more mortality in the city is the pollution associated with traffic.” “Therefore, we must act on traffic to reduce its impact on health, we must see how much it improves, but it is clear that reducing it will be positive,” he concluded.