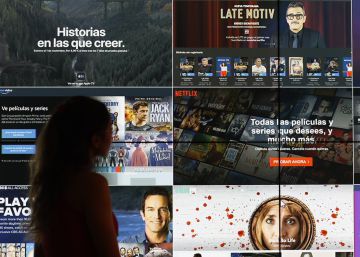 March 24 will land in Spain Disney +, which comes to swell the long list of online television platforms. Since 2015, Netflix was installed, HBO has arrived in 2016 and, a month later, Amazon Prime Video; Sky in September 2017 and, in 2019, Starzplay and Apple TV +. The war of streaming it does nothing more than crossroads and, in this battlefield, as in every war, the future is in alliances.

Acquire all available platforms in Spain it amounts to more than 70 euros per month. For the user, the benefit of some packages offered between the operators and the platforms supposes, in the majority of the cases, a relief to the pocket, when happening to a unique invoice for all the contents. In addition, with a superficial calculation, in the majority it represents a reduction with respect to acquiring them separately. The version premium Netflix is ​​15.99 euros; do it through the Movistar platform are 15.

Something like this is the inevitable future of pay-TV, if the American experience serves as a reference: there the platform platform creation is called bundling (and saves more than one euro). Therefore, when it was learned that Disney + would arrive in Europe, various sources said it could be integrated with telecommunications operators (Movistar, Vodafone and Orange, all with their own television). These negotiations do not imply that you discard the adventure alone. The company does not give details about it.

The operators, which in the end have been the biggest creators of pay television brands in Spain, are the main stakeholders. HBO and Netflix joined almost immediately upon arriving in Spain to Vodafone, while Movistar includes the aforementioned possibility of hiring Netflix since the end of 2018. Orange, in addition to Netflix, has Rakuten TV – one of the first to arrive in Spain together with Movistar + and Filmin— Starzplay and FlixOlé, specialized in cinema produced in Spanish and which was relaunched in November 2018.

“It’s something that was already being done in the United States and, in fact, it is the trend that experts say will end up transforming pay-TV,” says Elena Neira, author of the book The other screen (UOC). Everyone wins in this alliance, says Neira. “For platforms it is a way to automatically incorporate a mass of customers interested in the series, which thus do not have to build from scratch, as it means to build a service in streaming ”.

And for the operators? “What it means is to incorporate different offers and the prestige of the brands it adds.” For example, says Neira, Movistar was a buyer of the contents of HBO and Netflix before they arrived in Spain. So at a time when both companies withdrew their content, putting Netflix in their offer is “a very skillful way to recover what they had lost.” “People want to see it as a competition, but the truth is that in the end they realize that the audience is so fragmented, it is so difficult to get customers for a service, especially with how saturated the market is, that any opportunity that allows to add more clients embrace it with pleasure ”, he clarifies.

Unfortunately for the viewer’s pocket, this model has a limit. As the American television analyst Matthew Ball recalls, the so fierce war of the streaming It is not a contest between platforms, but between ecosystems. Television has become, more than a business, something minority, the bait that attracts the public to a corporate microcosm. This is the case of Apple TV + or Amazon: “They make money as a store to the point that they are giving away Amazon Prime Video [viene por defecto al contratar la opción Prime]. The heirs of J. R. R. Tolkien chose Amazon Prime Video to make series inspired by The Lord of the rings for, among other things, the possibility of selling millions of books, toys and films of the franchise, “said Neira in 2019.

Apple fights in the war of streaming Without looking for allies. After several failed music and video projects, they launched their platform in November worldwide with the intention of seeing their products on their own devices. “Its contents are a drop in an ocean of economic activity. They are not looking for an intensity of beastly consumption as Netflix pursues, ”in the words of Elena Neira. “At the price of demolition [5 euros] and giving away the subscription if you buy a device of theirs, that strategy will make them grow very fast, have a mass of important starting subscribers and strengthen the power and resonance of the brand, ”the communication specialist predicted a month before Let the service out.