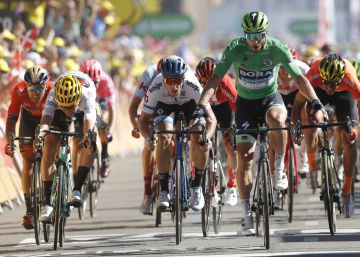 At noon, the cities bid farewell to the cyclists, who go with the Tour to another part and transform the fences that have delimited the race in fences for their petanque courts under the plane trees. The most audacious have gone to the dawn almost to the gutters of soft grass and have planted their umbrellas and hammocks, which fly and bring down runners at times. Come pass the Tour, then watch the Tour on TV. On the shaded terraces the players eat and then lie on the sofa to watch the stage. The drowsiness startles them like a explosion and open your eyes with just enough time to see Sagan, green as always, doing the Hulk at 60 kilometers per hour at the finish line, and they say, "jopé! What a barbarian! "

They are the Tour.

The same unconditional admiration, amateurs with an open mouth, who is beginning to win Alaphilippe, still wearing a yellow jersey, Sagan has enjoyed it for years, an essential part of the Tour.

Sagan's victories, his exhibitions of brute power transformed into pedaling speed in tenths of a second, are already part of the spectacular routine of the Tour in the last eight years, and with this Alsatian from Colmar between vines of Riesling and pinot gris and hills rough asphalt, are already 12. They are expected and celebrated, and when they arrive they reassure the people of the Tour, who do not like the serious and morbid Sagan of the days that do not win, despondent and without wanting jokes in the mixed zone. "You have to understand it. Peter tends to be tense during the first days of the Tour, only later he relaxes and it's more him. And when he wins he changes, of course, "says his manager, exsprinter Giovanni Lombardi, also Viviani's agent, the winner of the previous day, who inspired days is an infallible oracle at the start of the stages. "The Deceuninck is going to let the flight go by pretending that he does not want to defend the jersey of Alaphilippe, so the two who want to win the stage, and will play like a classic, Sagan's Bora and Matthews' Sunweb, will work hard to get to the sprint, where Peter will win, of course, "Lombardi anticipates four hours before it happens as it is, and whoever hears it is amazed and even thinks that the Italian sneaks into the meetings of the teams and spies them and thus knows what they are going to do.

Not so, of course. Lombardi only says aloud what all the people of cycling know, one of the classic laws: the best team is the one that best knows how to make the rivals to do the work that suits them best. Or, said in his slang: before eating your plate, eat the neighbor's plate. Cycling, the only sport in which those who work do it for their own and for others, who take advantage of it.

The French press, still fascinated by the joy of her Alaphilippe, the son of the director of a dancehall orchestra who plays the drums, who dances when he pedals and climbs the race, from two to two steps, the staircase leading to the podium, asks you to attack every day, to earn more time, to reach the end of yellow, or even where it is. The team responds almost as if asking if they have all gone crazy. The Tour is long, the Tour is intelligence, the Tour is not spending the team and the runners foolishly in stages that are not ours: the Tour is also Enric Mas.

The Deceuninck is not the only one who handles the rule that unnecessary waste leads to melancholy. Dan Martin, the Irishman, has tried to give less pedaling stress than anyone traveling almost always to the tail of the squad while others stick to go ahead. It's a lottery – a cut, a fall ahead, ends the hopes – that went well for Pantani in 98. Simon Yates loses every day time to be cooler the day he touches helping his twin Adam.

The day can be this Thursday: The Vogos and La Planche des Belles Filles arrive. Egan Bernal, the 22-year-old Colombian who opens light wheels and looks like he was born in the Tour, is expected to speak to everyone and more than anyone else. "It's only his second Tour," says his roommate, Castroviejo. "But he learns very fast. He already knows more than almost everyone. "