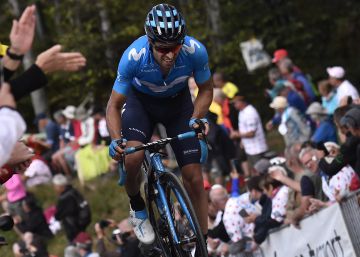 Mikel Landa (Movistar) has explained that "fortunately it was nothing" the fall he suffered on Monday during the tenth stage of the Tour de France, but has not hidden that "mood" is "a little worse" because he has suffered again "another hard blow that takes us back". The Alava cyclist, who fell in the ninth stage After being knocked down by Barguil and losing more than two minutes with the big favorites, he is now 4 minutes and 15 seconds behind the leader, Julian Alaphilippe.

"Today I woke up with some more pain, but fortunately it was nothing: a blow to the arm, another in the face and nothing else." I'm a little bit worse, it's another hard blow to come back. Thinking about what's left Yesterday it was spinning, why me, why me, it was really good, yesterday's race was going very well, it would have been a great opportunity to get closer to the objective of this Tour and One more happens, but the past is past, I do not want to waste any more time on that, "Landa explained to the press during the rest day of the Tour.

From now on, his goal will be to "look for some stage" and try to re-engage "as it is to the general". "We'll see, there's still not enough time to turn it in. Right now I can not find something that hooks me in. I need my mourning, my two bad days, leave me alone, and everything will be turned around and luck will change I hope, "he wished.

As for the rest of the contenders for the final triumph, Landa remarked that "there are still enough favorites". "Those who are behind, like Fuglsang and Pinot, who are quite guerrilla fighters, will surely move the race and have a lot of influence, I hope that the time I have lost also gives me more room to attack, but in the Tour it is complicated. any position and as you approach the tenth place starts to have many interests and it is not easy to trace, "he said.