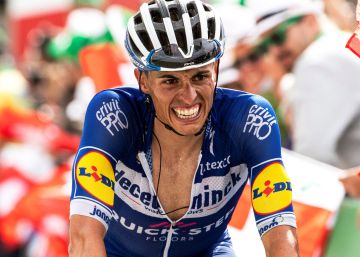 With Guillaume Martin, who is a philosopher, theatrical author and novelist, and Tour cyclist, light climber, speaks of the stage of this Thursday Pedro Horrillo, exciclist, columnist and philosopher. They philosophize, of course, and they do it by shooting bad jokes, like "the menu of the Tour consists of very well made cyclists, hehe".

Reflect on the sad condition of the cyclist, forced to martyrdom to win the admiration of all, and, in passing, remember that touches mountain, the rise to the well-called Planche des Belles Filles, 7 kilometers to 8.7% with a final ramp , the real iron, from 400 meters to 24% in the sunny Vosges, and that the Tour will suffer a tremendous hangover on Friday. And behind them, they hear Enric Mas, a very good cyclist, the best placed Spaniard in the general (eighth to 46th), announcing as one who asks for two hard-boiled eggs: "And Movistar is going to attack".

"Hehe," echoes Eusebio Unzue, the Movistar boss, when asked if it is true what Mas says, which runs on another team, Deceuninck. "How do you talk about attacking what's left of Tour? We are in the sixth stage. In addition, of course, if I were to attack, I would not announce it the day before so that everyone would know. "

It is not so strange the prediction of Mas because he does nothing, a couple of months, the Movistar won the Giro attacking from the fifth stage. As in the Tour it happens with Nairo and Landa, the leaders of the equipment in the Giro, Carapaz and Landa, were of the most harmed in the tests against the clock. If they wanted to win, and they won, they needed to attack, and they attacked the order of Max Sciandri and Txente García Acosta, who shouted "Dracarys!" And everything was flame and fire, and their cyclists, dragons that sowed the desolation between the rivals. The équipiers they stuck to get into the previous escape to contribute more than anyone in the final attacks of their bosses. Imanol Erviti, the oldest of the team, who was not there, wants to participate in one of those covens, and organize it here, in the Tour, the best scenario.

Unzue, the prudent, only admits that he will send two of his own in the flight of the advanced ones that will surely be formed in the Markstein, the first of the three first ports that includes the 160 kilometers of the crossing of the Vosges, sometimes tenebrous, this summer, sunny. Then there is the venerable Alsatian Ball, where Ocaña broke his mouth and Eddy Merckx dressed in yellow for the first time in his life, and the final Iron. Then you will see if they contribute to the attack or to the defense of their leaders, who already have ants in their legs. Nairo, the efficient, however, warns: "A shot in the air, one shot less".

Meanwhile, enjoy the pleasure of having Alaphilippe, teammate, leader of the Tour, which allows him, well sheltered, to receive free and close lessons on how to dress with dignity the yellow jersey and forces to discover the rival teams. "It's an ideal situation," says Contador, who is visiting the Tour and also bets on Landa. "But it should only appear in the last week, until then it will not give a pedalada of more. And then Ineos and Movistar will make the race for him ", says his Deceuninck strategist, Patrick Lefévère, while the Majorcan debutant affirms, with the humility that helped him so much in the last Tour:" Of course I do not intend to take the yellow in La Planche. I'll have enough to not pick up … "