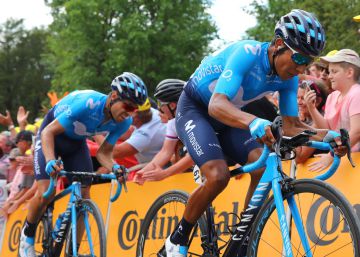 He confesses that so many times he asks himself, why me? Why is it always my turn? But Mikel Landa does not accept being classified in the labeled box of fatalists. And when he goes out to roll a little around the château between the vineyards of Gaillac in which the Movistar day passes, it is the only one that protects its head with the yellow helmet that distinguishes the best team of the Tour, and, standing out among the rainbow helmet of the presumed Valverde and the blue of all its colleagues, he says he does it because it is better to use it as much as possible because they will lose it soon.

There is no one to raise his morale.

A day of rest is the worst day for the mood: the runner does so little, gets so tired, that he has all the time in the world to get bored and to turn his worries over in his head. The Alava cyclist lost more than two minutes on Monday and his hopes of a good classification. "And at least I did not lose any more, because when I fell in the gutter the spectators had time to step aside and I did not crush anyone, and I skimmed a traffic pole a little more and hit it and then I did not get up" , he says, already irremediably overwhelming. "One more blow …"

The only Spanish team, the Movistar, is in the hands of a demoralized Alava and a Colombian in the clouds. Its contrast, its apparent lack of communication, turns the joint press conference into an exercise that can be piously called curious; to describe its effects on the road, when the Tour, tomorrow, touches the Pyrenees, already enter the territory of the unknown. Nairo says he has the support of Landa to get as high as possible, but Landa responds that he does not know what he wants to do what remains of the Tour. "I do not know if I'm going to win stages or think about the general," he says.

If Landa does not know if he will play the bass or the solo sax, in his team they think of assigning him the same tactical mission that he already fulfilled in the Giro de Carapaz: to scare with him and then to strike with Nairo. Therefore, they have, and so respond to the critical comments of Ineos, when it was delayed by the fall, the Movistar delayed three runners so that it does not get flooded, because Landa still 4m 15s away from the leader can still scare, but at 10m there It's worth nothing. And better that to have taken a minute more to Pinot and Fuglsang, who would have achieved with all in front. "And," reflects Erviti, one of those who fell behind, "one as important as Landa can not leave behind as if nothing."

At 23, Nairo was second in the Tour; at 25, also second. In 2016, third. From there, down. After three Tours below expectations, Nairo descases reasons to believe that at 29 years will be better than at 26, when he already feels, he says, "almost an old glory" compared to the young people who arrive, as his countryman Egan Bernal, seven years younger, and scared.

All the reasons, very much in line, were cryptic messages between the lines. "I had not been in the comfort of the last few years because of particular circumstances, like two years ago, when I did the Giro before," said Nairo, who did not want to say whether the discomfort was caused more by his impotence in the face of Froome's attacks. year absent, or his bad relations with the head of the team, Eusebio Unzue. "But there have been changes. We have desire, good equipment and body in conditions. I have done things well. "

Nairo looks at himself in a mirror and is happy, he is in his being, but from the outside he also looks good people like his coach since this year, Michele Bartoli. "You can see that he is very well with his attitude, as was seen in the Albi fan: concentrated, safe, calm," says the Italian, who remembers that he was not very strong at the Dauphiné in June – the last time He crossed in the high mountain, and with not very hopeful results, with the rivals of the Tour-, it was because he was so programmed, and so the team asked him, that he did not try to win it any way he could. "You have to go calmly to be perfect on the Tour. Nairo has the values ​​of one of the best cyclists in the world and that's why he has to think about victory. "