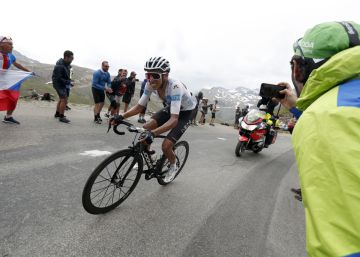 “When nature is unleashed, its strength is stronger than that of all humans,” says Christian Prudhomme, the Tour chief, and it would not cost much to think that he is talking about Egan Bernal, a 22-year-old Colombian boy and a boy's face still, and big eyes that eat the world with an illusion that seems so pure, its hunger. Egan has attacked in the Iseran, the giant of the Alps, and has left alone, only as the champions must go, just as Eddy Merckx was going, and looks only back, turning his head minimally, to check the disaster behind him it grows. And from behind they only distinguish it with a spyglass.

Egan goes for the Tour, for the yellow jersey, and nobody can follow him. All the great generation of cyclists, all who have turned the 19 in a Tour that will be remembered as the Tour of the great adventure, have surrendered. Alaphilippe, Thomas, Kruijswijk, Buchmann, Landa, Valverde, his admired Nairo, all are erased in the distance. They may think that they will regain strength in the descent to the last climb, to Tignes, where Egan wants to go alone, of course, to make it clear that he has said to fate, without fearing him, I will go after you, I will not run away, and here I am. Perhaps they dream of a faintness of the Colombian, who, when there are five kilometers to the top of the Iseran, wonders and decides: do I attack to win and risk a podium that seems safe or I stand still, I keep and spend the rest of my life Wondering what would have happened if I attack?

So goes the ranking

It was a rhetorical question. There were no doubts. In his cycling temperament there is no more than courage. And, bold, it launches.

His team, the Ineos, the calculation and control machine, has taken control of the crazy Tour, has returned him to sanity, but he is a Colombian who enjoys only fighting like a child, thinking about the pleasure of flying, in the adrenaline of the competition, who takes the reins of the future of the team. His victory, that of the Ineos, is no longer the death of the hope that the unexpected will happen, it does not indicate the impossibility of the Tour of attack. The Ineos trantran does not flatten the Alps the illusion, as it used to, but it gives birth to a new one.

The land had been prepared by his companion Thomas, who had attacked to finally end the Alaphilippe whose presence tortured them and took away their sleep. As if there was a concert among everyone who looks at the Frenchman as an intruder, his attack is replicated by Kruijswijk, who wants to secure his podium. Pinot does not enter the game: he has retired injured before the stage began to mature. His body never endures his offensive character, he always breaks into a lament and a shout: he is the only runner who always exceeds his limits, and will not stop doing so. It is the cyclist who is admired, without calculation. Nor do the Movistar enter: Nairo can't stand the pace, Landa yields. Egan leaves his lookout at the wheel of Alaphilippe, which bites the rarefied air at large puffs and, light as none, and stronger, advances, advances and attacks. The Tour moves at an altitude of 2,300m. Five have all pedaled over the 2,000m border. While everyone fights to find oxygen in the thin air, Egan enjoys how when he climbs from his Zipaquirá, 2,700m down the road to Pacho, like Efraín Forero, the first myth of Colombian cycling, the Indomitable Zipa, 70 years ago. Egan is the new Zipa, the wonder child of Zipaquirá, and everyone marvels. There are 42 kilometers left for the goal. This will be the great attack that will decide the Tour.

When he spoke of the runaway forces of nature, Prudhomme did not speak of Egan, of course, Egan is a force of nature too human, more human perhaps than all the former great known champions, Merckx himself, or Indurain, Armstrong, Hinault and Froome He was excitedly referring to the storm that cuts the road with mud slides on the asphalt, and hail, and the light goes out and a dramatic, dark backdrop is created to welcome the light of his new jersey, the splendor.

A motorcycle is approaching him from behind when, with Simon Yates, a fugitive refugee who has grabbed his hump in the descent, approaches Val d’Isère. The pilot, with energetic gestures of his right hand orders him to stop, to stop, not to follow, and Egan looks at him incredulously, and does not understand. By the pinganillo he hears conversations in English and cries of surprise, but he does not understand them, so much is the noise. Ask to be spoken in Spanish. “The stage is over. The road is cut. Impossible to cross the flood. Times are taken on top of the Iseran. You are the yellow jersey of the Tour ”, those of his team tell him in a language he understands, a message that transforms him. He has literally run with his head in the clouds, in the Iseran, at 2,770 meters above sea level, and now, going down, he feels in the clouds really, and is afraid that everything is a dream, and, he says, If it were, I hope I never wake up.

Egan is the third Colombian to wear yellow, after the fleeting leaders of Victor Hugo Peña and Fernando Gaviria. It is the first of his country, the country of the great Lucho and Fabio Parra, of the great Nairo, three times podium, which reaches the top of the Tour just two days from the end. No one would bet on a winner of the most spectacular Tour in decades that would not be called Egan Arley Bernal, 22, three months younger than Felice Gimondi, who so far figures as the youngest winner of the Tour of modern years, those who begin in 1947

The cancellation of 37.5 kilometers of the stage steals perhaps part of the pleasure of ascending a port alone, in front of everyone, and of feeling unique for a few more minutes; and steals from his rivals, Alaphilippe, the acrobat of the descents that grazes the fall in each curve drawn to the millimeter, the right to continue fighting until the end for the victory.

There is no controversy. "I gave the maximum and I won Egan Bernal, a stronger one," says Alaphilippe in his surrender. "The yellow jersey is already out of my reach." Not only that. The stage of this Saturday has also been cut by the landslides prior to Val Thorens, and is left alone with the last climb and 59 kilometers, a day that will begin at 14.30.

The cancellation, the Tour on his knees before uncontrolled nature, gives him, however, and gives all fans a unique coronation in history. The Iseran, the port of Gino Bartali, the port where Bardet enjoyed as a child, has never been the end of the stage. The most notable event at its summit, that of the highest road crossing in Europe, was the withdrawal, in 1959, of old Louison Bobet, the Frenchman who had won three Tours, the most loved by his own, who gets off the bike and delivers it to Bartali in person, waiting for him to pick it up and accompany him on his withdrawal. From July 26, 2019, the top of the Iseran will be remembered as the place where the Tour gave the world a new great champion.

When he arrives in Tignes by car, Egan, so human, is a waste of feelings. He hugs his partner, Xiomara, and is minutes with her, and kisses her, and they both get excited, and she closes her eyes on her chest with a smile of happiness so absolute that no painter could imitate, and gets excited hugging her father, Germán, to whom he tells his life and his love for a few minutes, and the father makes the sign of the cross on his chest, already yellow, when they separate.

And when asked how he feels, he can only say: "I feel like crying."