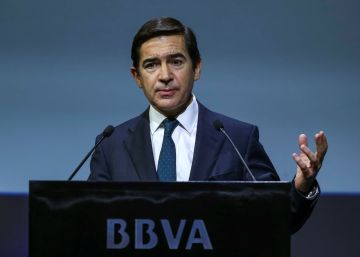 Last Monday, just two days before the Anti-Corruption Prosecutor requested the imputation of BBVA, its president, Carlos Torres, opened a blog as a communication channel with the staff, called The pulse. It announces that both the first executive and the CEO, Onur Genç, review current issues.

In the last paragraph of the text, to which EL PAÍS has had exclusive access, Torres enters into the issue of which his employees speak daily: “I would not want to finish without talking about Cenyt case, which unfortunately for all has also had prominence these months. I reiterate, as I said in the letter that I sent you in January, my firm commitment to clarifying the facts and complying with the law. Our investigation of the matter is progressing at a good pace, although I cannot comment on anything because, as you know, it is subject to judicial investigation, still under summary secrecy ”.

The first executive implies that they will not talk about his investigation, which has been open for more than a year, until the secret of the summary is lifted. Until now I had not contingent on this issue, although in recent appearances he has begun to say that the important thing is what the Hearing determines. This same speech is the one held by both the governor of the Bank of Spain, Pablo Hernández de Cos, and the vice president of the ECB, Luis de Guindos. PwC's expensive forensic investigation with the Uría and Garrigues law firm, started in January 2019, seems to have gone to the background.

Next, Torres says: “As expected, we have also seen that steps are being taken in this judicial case, with which we continue to collaborate actively. While the matter is resolved we have to avoid prejudging facts that have not been verified and, above all, we must keep our focus on our clients. ” Torres keeps his distance with the facts and leaves a patina of innocence over his predecessor, Francisco González. On February 1, in his first public appearance, Torres said that in the Villarejo case he would act "with absolute rigor and diligence" but that Gonzalez was his "guide and reference" and that he believed him when he told him that he knew nothing about irregularities

In the first publication, after explaining how the first months have been as president BBVA, in a relaxed tone, Torres points out Onur Genç says it is “impressive how fast he has learned Spanish, he already understands everything! Both he and the rest of the team are doing a great job. ” It addresses the unification of the brand, “we are all BBVA, ready for the digital world”.

He says that digital sales "have almost quadrupled in just two years." It highlights the work of microfinance, the Frontiers of Knowledge Awards delivered in Bilbao, and says that they will be “one of the world leaders in sustainable loans”.