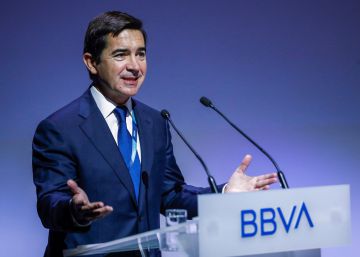 The president of BBVA, Carlos Torres Vila, he is sure that there is no “possibility” that he will be required to be responsible in the judicial investigation carried out by the National Court on the services provided by the retired commissioner José Manuel Villarejo to the bank, as he stated during the presentation of business results of 2019.

The BBVA It has obtained a profit of 3,512 million in 2019, which is 35% less than the previous year. The reason is that he had to reduce the book value of its subsidiary in the United States with a load of 1,318 million. In addition, it did not have the capital gains it had in 2018 for the sale of the Chilean subsidiary.

“Regarding my person, I can speak with total clarity. There is no possibility that I can take responsibility for these matters,” said the manager, who admitted that, despite everything, he will agree with “whatever the judge decides “.

However, unlike the presentation of results of the previous year, when he said he believed in the innocence of former president Francisco González, now Torres has not spoken. “I should not do it about people who are under judicial investigation,” he explained. He also indicated that if the judge accused him, he would not have to resign automatically from the presidency. “That is not an automatism; we should see the suitability of the position, but I have no connection with the facts,” he added.

Torres said the bank has already declared everything he knew to the judge, when he was charged as a legal entity, through the forensic investigation report and the statement of its legal officer, who spent 14 hours in court. “We have already transmitted that the bank is not responsible in this matter, that it is innocent and that is why we are calm,” he said.

The Anti-Corruption Prosecutor’s Office has sent a letter to the judge of the National Court Manuel García Castellón in which he requests the lifting of the secret of actions of the investigation of the BBVA contracts with Villarejo that remains in provisional prison.

Given this circumstance Torres said on Friday that he wants the facts to be clarified “as soon as possible” because that “perhaps means that the end of the investigation and the clarification of the facts are approaching. The sooner, the better“(The sooner, the better),” he said. Asked if he feared problems when the information contained in the summary on BBVA’s relationship with Villarejo and the bank’s actions during the preparation of the forensic report is known, he commented that the important thing is “judicial investigation.” He did not clarify that BBVA will publish its internal investigation, opened in June 2018 and still not closed, as he had suggested: “We will do what the lawyers say.”

Regarding the decision of the European Central Bank (ECB) to ask the BBVA and then the National Court for the forensic report, a story that transpired in December, the president of BBVA has explained that the bank did not deliver it “because it is under summary secret “, but in spite of everything, it maintains an” intense and fluid “relationship with its supervisors, with whom it always shares” all the information “.

Torres did not want to clarify whether former president Francisco González could recover the presidency of honor of the bank, which he left temporarily, and has affirmed that the Villarejo case has not had any impact on the business or the reputation indexes used by the bank or Customer acquisition. He added that in the presentation of results to analysts there were more than 30 questions and none has referred to the BBVA-Villarejo case, Although some risk rating agencies have indicated that the problem could affect the entity.

However, according to the reputation indices of the specialized firm Merco In 2018, BBVA ranked fourth in the ranking and in 2019 it moved to tenth place. Asked about the possibility of the Government agreeing with the PNV the return of Basque advisors to the bank or that a merger was encouraged, Torres commented: “It was that time when that could happen, if it ever existed.”