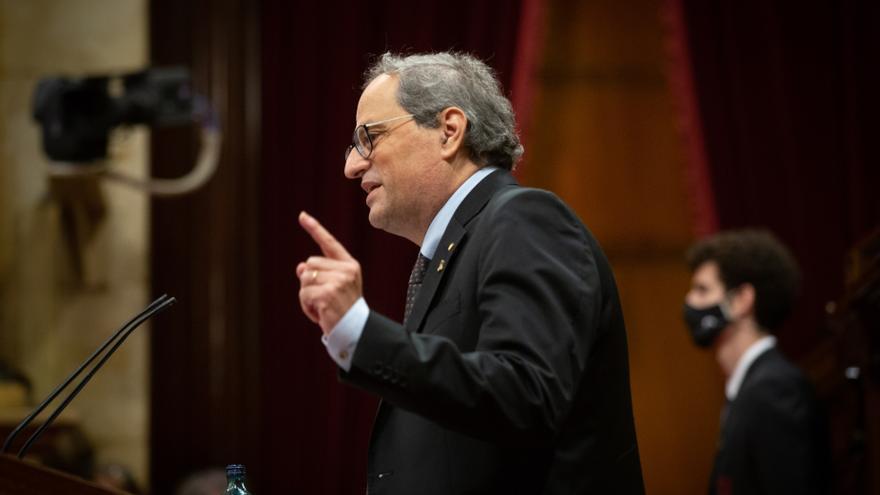 Quim Torra has appeared before the Parliament this Wednesday no longer as a deputy, which he has not been since last January, nor as president, who stopped being one two days ago, but as a guest and to say goodbye to the deputies with whom he has shared the hemicycle since December 2017. The former president stood before the lectern released from the institutional corset to deliver a speech more typical of a civil leader of the independence movement than of a political leader, in which he described his dismissal as a “coup d’etat” and accused Spain to apply a “criminal law of the enemy” against the “national minority” Catalan.

“Once again and we have already lost count, Spain pulverizes the will of the people of Catalonia”, said Torra, “and I refuse to normalize and accept the repression of a state that puts the unity of the homeland”. The former president of the Generalitat has charged harshly against the State, which he has considered “systematically persecutes” the independence movement.

“What they do not win at the polls, the courts eliminate it. When they do not like that it comes out of the polls, they redo it later in the courts,” continued the expresident, who has assured that “when a mature society expresses itself, it decides and he votes, he deserves all the respect of the institutions “. For this reason, Torra has called on the deputies to also defend the vote and the results of the elections within the Parliament because, he has told them, the seats do not belong to politicians but to citizens.

The former head of the Government has not limited his criticism to the courts but has also charged against the central government. “Make no mistake, to show that the judiciary acts on its own is a very serious mistake,” he said because, according to Torra, “political persecution is allowed by the governments of the PP and the PSOE, Podemos and the comuns.”

Torra has also assured that his legal battle has not ended but that he plans to take it to the European instance. “I neither abandon, nor resign myself, nor accept this dismissal,” she said, and promised to take her cause to Europe. “The European courts already know the ways and irregularities of Spain when it comes to repressing political dissent,” he said, ending by promising that it will be in Europe where he will win “the legal dispute in the fight for respect for individual rights collectives of the Catalans “.