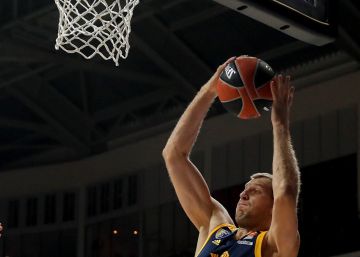 Velimir Perasovic likes to devour history books, so he sure knows that in Jimki, the city on the outskirts of Moscow, the Nazi battalions began to lose the battle to take the capital. There they stopped when they tried to surround the city. He Baskonia He tried to circle the game to reach a favorable final score, but failed to close the circle despite finishing very close.

The defeat can be attributed to the triples who left when they seemed to enter, or to the 15 free throws that the Vitorian team failed, by only one of the Khimki, but perhaps the thing that most hurt Perasovic's men was the effort to balance a game that the 15 minute lost by 14 points.

The last five minutes of the first part served for Baskonia to catch his breath after a disastrous start in which the Khimki swelled to play in attack with all the facilities that gave him a Vitorian defense with low biorhythms. The team that directs Kurtinaitis is a specialist in running and scoring, without too many attacking flourishes, and easy corridors were found for triple launches and for deep loads to which they subjected the Baskonia with four alley-oops that crushed the basket and also, somewhat, the morale of Perasovic's men. Evans bombed those of Vitoria, too loose in the area, with the assistance of Zaytsev, a surname of unequivocal war connotations, although this time they did not correspond to a sniper, as in the battle of Stalingrad, but to his assistant. With that, and the failure of the giant Fall to score the free throws (3 of 8) in the fouls that were made under the basket, gave the feeling that tracing was going to be a Herculean job.

Very weak in concentration, Baskonia started under minimums and started to run as the game went on, but was resurrected in the last minutes of the first half. With a Diop that ordered the defense and the intermittent appearance of Shengelia, he improved the picture. He went from a bleak 39-23 to the hopeful 43-39 with which the teams went to rest.

In the beginning of the second half, Baskonia was one step away from the miracle. With 49-48 on the scoreboard, and possession, he failed the only shot he had all night to get ahead in the light of the Russian pavilion. The Khimki endured the downpour that seemed to come upon him, Kurtinaitis's cheeks in the band returned to color, and between the free throws missed by those of Vitoria and the poor skill in the field shots, the visiting players did not have the real opportunity to flip the marker. Shields did not appear, bright at the opening of the European season and things were a bit more difficult.

The rodeo had been too big and they reached the last minutes, although the final score (79-76) seems to say otherwise. The second consecutive trip of Baskonia did not end happily as the first, and he still has one more, because the vagaries of the calendar make his third Euroleague game, again away from home, in Istanbul, before the fearsome Fenerbahce.