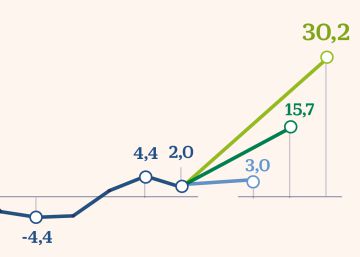 The Government is finalizing the large figures of the General State Budget project for 2021 that it plans to start promoting tomorrow by approving an unprecedented increase in the spending ceiling, above 30%, in order to cover the economic recovery after the crisis opened by the Covid-19 pandemic. Just released by the European Union from the corset that fiscal rules imply, suspended for next year, the Executive will shoot public spending, assuming that the coronavirus will leave new bills of draft and addressing important investments on account of the large community aid that will begin to to receive.

This last item is the one that explains the bulk of the historic increase that the Treasury plans to present to the Council of Ministers tomorrow, according to sources familiar with the budget calendar. Spain aspires to receive 140,000 million euros between transfers and credits in the next six years, of which the European Commission has already announced that it will inject 43,480 million in the form of grants between 2021 and 2022. The Bank of Spain estimates that the aid that will arrive on next year the country will be around 20,000 million euros. An amount that, claims the EU, the Executive must allocate to investments related to digital transformation, environmental transition, reindustrialization or housing rehabilitation, and that Spain will try to implement in full to ensure that the money reverts to a greater increase in the GDP.

Only the use of European funds would shoot up by 15.7% the spending ceiling initially approved for 2020, 127,609 million euros (although the figure that ends up being settled this year will be much higher as a result of the overflow of spending associated with the pandemic ).

The Government, however, will not be content with integrating resources from Europe into next year’s accounts. It should be remembered that the Coalition Executive formed by PSOE and United We Can started its mandate by taking advantage of the approval of a spending ceiling for 2021, together with that of 2020, of 131,437 million, which would have meant a year-on-year increase of 3%.

But this projection was carried out before the crisis and the Government is now assuming new commitments in health, educational and social spending that cannot be met, at least in full, with European aid. The Executive has already advanced that they will be expansive accounts, which must assume the cost of new benefits such as the minimum vital income (3,000 million a year) and meet commitments such as allocations to dependency. In addition, the Treasury has announced its intention to maintain the resources assigned to the autonomous communities this year, which among other things have received 16,000 million in transfers from the so-called Covid fund or updates of the installments calculated without attention to a fall in GDP that in June was already 22.5% year-on-year.

Only with these figures, the update of the game would exceed the one deployed in reaction to the previous crisis. Adding community funds, the spending ceiling would skyrocket above 166,000 million, more than 30% above the starting level of 2020. And it cannot be ruled out that it ends up being even higher.

The record increase would double the 13.9% increase raised in 2010, although the amount associated with that year represented a 4.5% reduction compared to the actual expenditure in 2009.

Such a leap will be possible thanks to Brussels’ decision to suspend fiscal rules, which will allow the Government to incur deficits and debt without having to explain how it will redirect public accounts, for now. The Executive prepares, in any case, a small battery of fiscal measures, such as an increase in personal income tax for high incomes, in order to make a nod to its most progressive wing and to be able to present itself to the EU as a country that also takes care of its income. After all, the deficit threatens to jump this year from 2.8% to 12%, shooting the debt from 95.5% to 120%, and the Executive hopes that the containment of the extraordinary cost that the crisis has entailed this year and economic growth make it possible to reduce part of this new fiscal hole and to contain the indebtedness that is eventually reached.

In any case, the huge volume of public spending planned for 2021 could grease the negotiation of Budgets, for which the Government, in a parliamentary minority, continues to require multiple and varied supports that promise to demand concessions in return.

The Minister of Finance and spokesperson for the Executive, María Jesús Montero, has summoned the regional leaders of the branch to the Council of Fiscal and Financial Policy on Monday, as a usual previous step to the beginning of the processing of new General State Budgets. The appointment, however, will be extraordinary. This is the first of these meetings to be held after the outbreak of the pandemic, after the result of the last conclave, held on February 7, facing some accounts for 2020 that never saw the light. The usual objective of this meeting would be to set regional deficit targets for next year, but the recent suspension of fiscal rules also frees communities from their deficit reduction obligations. In any case, during the meeting the indicative figures expected for the regions during the new year will be discussed. What will not be addressed, as expected at the beginning of the year, is a reform of regional financing that the pandemic leads to postpone once again.