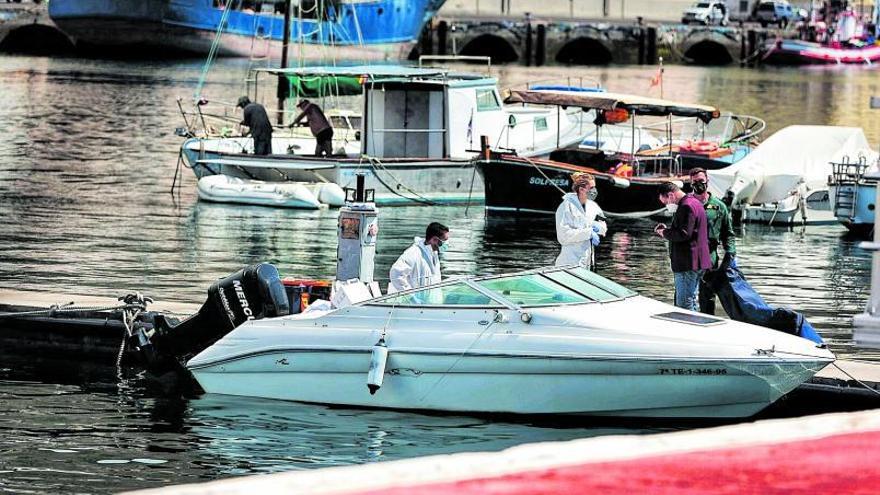 The new Civil Guard helicopter in Santa Cruz de Tenerife was released yesterday during the search for Tomás Gimeno, Olivia and Anna. One of the patrol boats of the Armed Institute carried out inspection tours between the capital of Tenerife and El Puertito de Güímar. Gimeno Casañas' vehicle had a broken left rear window, with the remains of glass on the seats, and there was some disorder inside. | carsten w lauritsen / maría pisaca

Tomás Antonio Gimeno Casañas hired the mooring of his boat, Esquilón, in 2016. In the first years he used his boat more, the Sea Rae type, which can cost between 10,000 and 15,000 euros in the second-hand market. He used it with his partner and his daughter. But also with several friends. In recent times he used very little to this leisure activity. According to the sources consulted, he had the basic qualification of pattern. The regulations prohibit that with this documentation you can navigate at night and, in addition, your boat lacks lighting, so it is not visible to other boats and is a serious danger to maritime safety.

Tomás Antonio Gimeno to his ex-partner: "You will not see your daughters or me again"

However, some dock owners come at certain times, after finishing their work or business activity, to start the engines of their boats and thus guarantee maintenance. Several even sail for half an hour or an hour and return before curfew. But this was not the case in the case of Gimeno Casañas. Tomás and his ex-partner have allegedly had a complex and "hard" separation process. There was an arrangement for the visits of the girls, Olivia and Anna, to their father. And on Tuesday the man had permission to be with them until 9:00 p.m. But he did not transfer them in the set time to the mother's home, in the Radazul area.

Tomás Antonio Gimeno to his ex-partner: "You will not see your daughters or me again"

Thirty minutes later, at 9:30 p.m., it arrived at the Marina Tenerife marina, according to video surveillance cameras. Its berth is in the pants closest to the offices of the enclosure. Then he unloaded the suitcases and packages that he was carrying in his car, for which he took up to three trips between the Audi A3 and his boat. He is alone. The girls are not shown walking with him towards the boat. Twenty minutes later, at 9:50 p.m., he started for the first time and went sailing with Esquilón. He returned to Marina Tenerife at 11:30 p.m. Then he took his car again and went to one of the gas stations located in parallel on the San Andrés highway. At the store he bought a mobile phone charger. One hypothesis is that, at some point, you were able to leave the car keys inside and the car locked automatically. Maybe that's why he was forced to break the window to open the door. Tomás returned to the marina and went to the guardhouse, who asked to charge his phone in the sailor's room. The worker noticed him nervous, anxious, impatient. He also warned him not to go sailing at that time, among other things because of the curfew. But he ignored him. At 00:30 hours his boat started again, left Marina Tenerife and did not return anymore.

Seeing that he did not bring the girls to the agreed time, the mother went straight to Tomás's home, located on a street in the Igueste area, in the municipality of Candelaria. Before the separation, the family moved to live in the farm on a rental basis about a year and a half ago. It is a chalet surrounded by greenery, in a rural and very quiet area. The missing man had lived alone at that address for several months. His ex-wife did not find Tomás or his daughters in the house. He found that the home was missing clothes. He telephoned the girls' father several times, but got no answer. At 10:00 pm, it was Tomás who called her to tell her that he would not see his daughters or him again.

Faced with that terrible message, the woman went to the Civil Guard post in Candelaria, where she reported what was happening. Tomás turned off his terminal or ran out of battery. According to the sources consulted, at 2:00 am, he called his ex-partner again to repeat that he would never see Olivia or Anna again; neither to him.

During the early hours of the morning, after leaving Marina Tenerife for the last time, he sent his farewell WhatsApp messages to his parents and some friends. When in the morning they saw the words of his son, his father went to the Civil Guard to try to request help. Shortly after, agents of the Armed Institute, both in uniform and in civilian clothes, went to the home of Gimeno Casañas, where they made a search and spoke with the residents of the place. Some residents of the area define the girls' father as a correct person, who greeted and exchanged phrases when walking the animals, but did not get to talk extensively with them.

Due to the circumstances surrounding the matter, the civil guards went to the Court of First Instance and Instruction number 3 of Güímar, which is on duty these days, to report the situation. Said judicial body opened preliminary proceedings in relation to the disappearance of Tomás Antonio Gimeno, Olivia and Anna, in principle for a crime of kidnapping. According to the information offered by the Superior Court of Justice of the Canary Islands (TSJC), the court decreed the secrecy of the proceedings.

Tomás Gimeno Casañas has no criminal record at this time. However, he is under medical treatment, according to the sources consulted. The ex-partner allegedly received his threats in December, but did not denounce him. At age 37, he appears as the sole administrator of an agricultural company in the municipality of Arona. Before moving to live at the home of Igueste de Candelaria, the family lived in a large farm owned by Tomás's parents in the Guaza area, in the South of Tenerife.

Tomás Gimeno Casañas used to frequent some nightlife venues in the tourist area of ​​Arona. This disappeared man comes from one of the families that owns extensive agricultural production lands in the South of the Island, mainly in the municipalities of Arona and Vilaflor.

In fact, his paternal grandparents owned the manor house in which the Marqués de Siete Fuentes lived, in the vicinity of the church of San Pedro, in the historic center of Vilaflor. His father, Tomás Gimeno Bello, a businessman in the agricultural sector, is known in motorsport for being one of the most important drivers in Tenerife at the end of the 70s (Lancia Beta Coupé) and the 80s (Volkswagen Golf GTI and Mercedes Benz 190 E 2.3 16).

The Civil Guard does not rule out any line of investigation in this matter. The Organic Unit of the Judicial Police and the Criminalistics Laboratory of the Civil Guard carry out all possible actions to determine what could have happened before the missing man boarded his boat for the first time. The inspection of Esquilón was carried out yesterday morning. This vessel was found empty mid-afternoon last Wednesday off the coast of El Puertito de Güímar. The Armed Institute neither confirms nor denies that there was a floating baby seat in the vicinity of the boat. Yesterday afternoon, the Audi A3 remained sealed by the Organic Unit of the Judicial Police of the Civil Guard in front of pier A of the Marina Tenerife site.

The new Civil Guard helicopter in Tenerife was released during the location of the man and the two girls. The search for the emergency device was centered between Punta de Anaga and El Puertito de Güímar. Throughout yesterday afternoon, the search radius by the Punta Salinas de Salvamento Marítimo ship was concentrated off the coast of Santa Cruz de Tenerife.