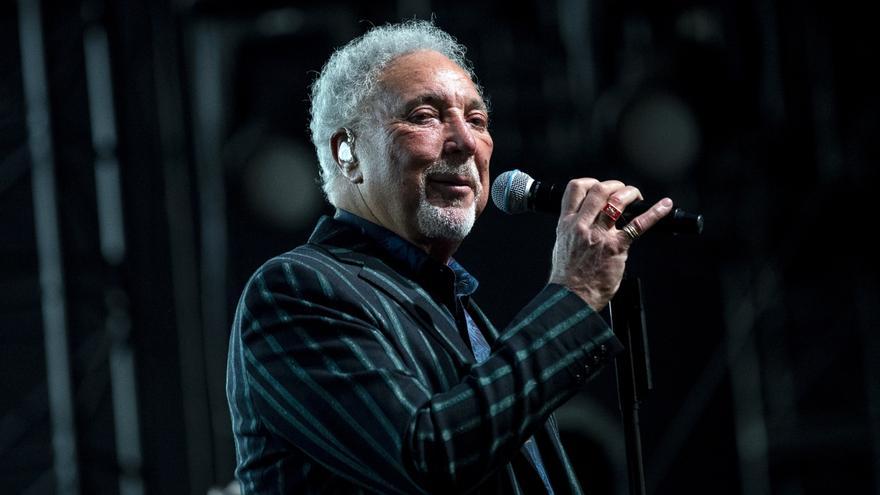 Tom Jones, the so-called 'tiger of Wales', still roaring at 80. To begin with, because his voice is still "strong", but also because, far from taking his legacy for granted as one of the great interpreters in pop history, he believes that "this was the time to do something really meaningful."

That, he explains in an interview with Efe online, is what led the author of romantic tunes like 'What's New Pussycat?' or 'Delilah' to record 'Surrounded By Time' (Universal Music), which is released this Friday and features an artist with desire to offer new facets.

"Why not make an album that reflects my life and those songs that mean something to me beyond pop? That's what I wanted: express how I feel about music now"He insists on a work produced by Ethan John and his son Mark Woodward and in which he has covered artists apparently as far from their usual coordinates as Cat Stevens or Bob Dylan.

The title of the album ('Rodeado por el tiempo', in Spanish) explains many things about the energy that has driven this album, number 42 of his career. "I'm getting older but I'm not older yet", laughs and first of all the born artist Thomas John Woodward (Treforest, 1940) warns." I can no longer do as when I recorded 'Pussycat' when I was 24 years old, for example. What did he have to lose? So I left many things to chance, some worked and others didn't. Now I think I have to be more careful, because I don't have that much time, "he justifies.

More "concerned with the lyrics", this work also shows a care for atmospheres and some experimentation with sound. The only requirement? "Had to keep ringing to me; even if people realized that this was something different from what was customary, they had to recognize me in all of it, "he replies.

All this does not mean that he repudiates his past. "I was and have been basically a pop singer. It was a question of the songs that were within my reach. My goal was to sing well, not to launch proclamations; I had no great cause to raise and I do not think that fame should be used to influence people I am dedicated to entertaining. I am not a philosopher", he asserts without losing his good humor.

"Bob Dylan is not a singer"

Jones affirms that he does not feel nor has he ever felt undervalued with respect to other artists who stood out for their compositions, such as Chuck Berry or Bob Dylan, whom he covers on this album.

"His lyrics are very interesting, but he's not a singer. I think sometimes writing songs comes out of necessity: since you're not a great singer, you have to compose your own songs. Because (good) songs already exist if you're lucky. find them and, if you are a consummate singer, all you have to do is put your stamp on them, as an actor would do, who does not have to write his own script, "he reasons.

The Welshman, who has seen his fame rise again in UK among the youngest thanks to his participation as a "coach" in the talent program 'La voz', he recalls how he managed to succeed in the beginning despite his curly hair and that "macho look" when what he wore were bands like The Beatles or The Rolling Stones. "Don't copy, create your own style," he warns those who wish to become artists.

Also has tips to keep your voice "strong and supple" at 80: sleep and stay well hydrated. "That meant cutting down on alcohol and I did it. Actually, I think I take better care of my voice now than 15 years ago. I don't know who said, 'If I had known I was going to live that long, I would have taken better care of myself.' And it's real "he jokes. "I never fell for drugs. I liked to drink, sometimes too much. Elvis Presley once said to me, 'You drink champagne and you'll be fine,' like, 'You can have a little fun.' Maybe if he had had champagne, he would still be alive today, instead of those other things he got himself into, "he reflects.

During the talk and that review of his past, he realizes another important piece of advice: "Cover all the bases," he says, regretting (minimally) not having accepted the role that Ryan O'Neal played with his idol William Holden in the film 'Two Men Against the West' ('Wild Rovers', 1971), by Blake Edwards.

"When you are young you always think that you will have time for it at another time. Then my representative told me that that would mean being a year out of circulation in the world of music, but at that time I was already singing in large pavilions in America. . Y we made a lot of money", justifies this big cat who hopes to return to the stage soon