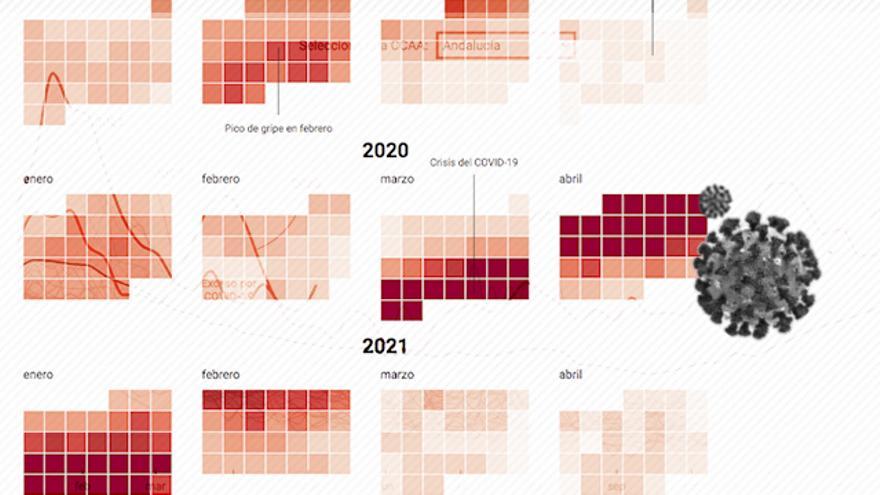 Never in Spain have more than 12,000 people died in a week … until now. At the peak of mortality of the coronavirus epidemic – between March 23 and April 5 – 20,000 people died from all causes in Spain a week for 21 consecutive days. The death toll registered is the highest in 45 years of democratic history.

An epidemic that has once again shown its effects on overmortality in the second, third and fourth waves of Covid-19. Although the records returned to speak of more deaths than expected in July and August, not all were directly attributable to COVID-19: a large part was linked to traditional summer heat episodes. However, all the data (including the official deaths recorded by Health) indicate that the excess of more than 34,000 deaths registered since the end of September is largely linked to the virus, directly or indirectly. Of this excess mortality, 19,000 come from the second wave (September to November) and the remaining 16,000 from the third wave and fourth wave (December to May).

Precisely, between January and December of last year there was an excess of 69,000 deaths above those expected in Spain. With these data, 2020 would be the deadliest year in the democratic history of Spain both in absolute numbers and adjusting for population, according to calculations made by elDiario.es.

This graph shows the result of elDiario.es analysis of the individual microdata of the more than 15 million deaths registered in Spain -from 1975 to 2019- in the death statistics of the National Institute of Statistics (INE) and the surveillance figures daily -2020 and 2021- of the Mortality Monitoring System (MoMo), of the Carlos III Health Institute (ISCIII). See methodology.

It must be taken into account that the mortality figures during the epidemic are an estimate with respect to the definitive statistics of deaths since the system only includes computerized civil registries –93% of the population– and the Carlos III Institute extrapolates to all the population. In addition, there may be delays in the notification of deaths in recent weeks.

How does the coronavirus epidemic compare to other spikes in mortality compared to recent years? We analyze this by comparing the figures for 2020 and 2021 with the daily deaths from the worst flu outbreaks and heat waves of the past two decades. Select the first, second or last quarter to see each period.

It must be taken into account that in some territories, such as Aragon, Cantabria, Castilla y León or La Rioja, the death figures are more extrapolated than in the rest of the regions because they have fewer computerized records, so the figures are an estimate less accurate than in other communities. In 2018, for example, the MoMo only registered 77% of the deaths that were registered in the provinces of Castilla-La Mancha compared to 99% in the Basque Country.

Each point represents the deaths in each week of every year from 2000 to the present. In black, the average from 2000 to 2019. The data from 2020 Y 2021 are an extrapolation from computerized vital records and may present delays in notifications

Deaths in every day of 2020 in comparison with the average of previous years in each age group. Estimated data: are an extrapolation from computerized vital records and may present delays in notifications

Many experts ask for time to find out what part of the excess mortality is attributable to the virus. In addition, the excess deaths recorded by the MoMo may also be some that are not directly attributable to COVID-19. For example, indirect deaths may have increased during the saturation of the healthcare system and other accidental deaths may have decreased during the exceptional situation of confinement.

Deaths in each week of every year from 1975 to the present. In black, the average from 2000 to 2019. The data from 2020 Y 2021 are an extrapolation from computerized vital records and may present delays in notifications

These figures are an extrapolation since the system is fed by the deaths registered in the computerized civil registries (94% of the final deaths) and the Carlos III Institute estimates deaths based on the percentage of digitized records in each community. In addition, they may present delays in notifications.

Communities with fewer computerized civil registries may estimate less accurately than the rest in their death figures relative to the definitive ones. These are the cases of Aragon (it detected 80% of the deaths finally registered in 2018), Cantabria (78%), Castilla y León (77%), Comunidad de Madrid (87%) and La Rioja (77%).