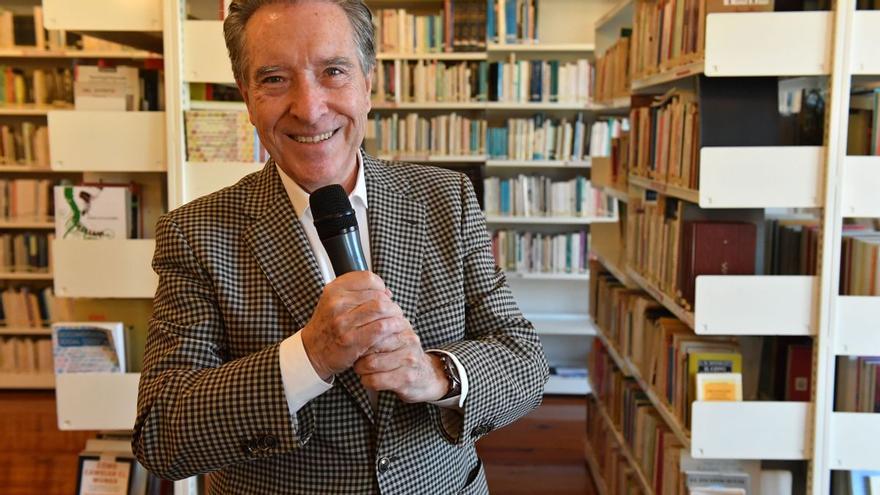 The historic journalist from Cadena SER, Iñaki Gabilondo, opened the lecture series yesterday in A Coruña The false truth, is there an antidote? organized by the Paideia Foundation.

He retired from the radio, officially, a month ago. Today he is here speaking of the truth. Does one feel more free to speak when taking distance from the environment?

I am not noticing anything other than what I have always felt. I have been required for many years to give an opinion on issues of the profession, and I do not have any special feeling of definitive closure of anything, I am going to continue living as I have lived, moving around. I don’t see myself spending the rest of my life sitting watching it rain, but it does give me a bit of a pinch to stop being on the radio. The first thing I did in my life was to direct a radio, the second to direct another radio and the third to direct another radio. I started on this in 1969. It gives me a bit of a pinch, yes.

Visit A ​​Coruña to talk about fake news, post-truth, manipulation. In that year 1969 when you started, was it easier to find that hidden truth in the noise?

It has never been more difficult than now. Especially since lies have always existed, like tall tales and probe balloons, but now they have received a scale that they had never achieved, not so fast. In one click everything changes. What makes everything more difficult is globalization, which spreads the bad, the good and the regular all over the planet. Before we lived in a more stable world, which was perhaps much worse, but more stable, more full of certainties. Instability has become institutionalized.

With the perspective of time, does it seem to you that those certainties from before weren’t so?

No, but they existed. When you were a young boy, during the dictatorship, you had certain certainties. Until the Berlin Wall fell, the world was divided between capitalists and communists, and there was a certain clarity of things. Now it is a game, we live in a more crossed society, more full of everything. Through the Internet there has been a total explosion, of everything that the world is capable of, of everything that it has stored in the past. All together in front of your eyes. The elements that constituted the foundations of your life, little by little, are now more complex and diffuse.

A question that nobody knows how to answer. These technologies, when looking for that truth, are they enemies or allies?

Technologies are tools. What is a knife for? To break bread between your brothers and to slice someone else’s neck. Technologies are neutral, capable of the best and the worst. It is precisely one of the peculiarities that make this world a very difficult world. The Internet is the greatest arena of freedom and the worst threat to freedom that has ever existed. For example, I was with Julian Assange at the Ecuadorian embassy in London. He believes that it is the greatest space of freedom that has ever existed, and, at the same time, he confesses that he is being the first witness of the extent to which he can turn against you. On the Internet you have the possibility of finding the latest book from the Alexandria library and a way to make a machine gun at home. In the dictatorship, things were mandatory or prohibited.

Much easier, without a doubt.

The field in which you could decide, because it was not mandatory or prohibited, was very small. With democracy this field is broadened. Now the world has fewer recipes to live, to act, and even to do journalism. Everything is more debatable, more debatable.

Depending on who you ask, they will tell you that we are in the best moment in history to do journalism or the worst.

I think we are at the best, but the structures that have sustained the journalism business are collapsing, trying to see how they adapt and, at the same time, millions of other initiatives are emerging that will illuminate the new journalism. For journalism it is a spectacular moment, and heralds a formidable future. What happens is that we live it with trepidation, because the organizations that supported journalism are in trouble. Before, gigantic paper bovines came in trucks across Europe to reach A Coruña, where large machines made a product that arrived nine hours later. Now, you have it in one click. That old machinery is seeing how it adapts. It seems that journalism is going to die, but it is a universe in transition. Meanwhile, you, or I, or a group of friends in Baltimore or Albacete, are coming up with new formulas. What happens is that you and I are having this conversation at the moment in which that happens.

The conflict between the new forms of communication and the traditional ones is current. Those who have been in this all their lives, do you think that this explosion of communicators will take away the maxims of journalism, objectivity?

There is everything between people my age. There are people who are looking suspiciously at the new game of new communication techniques, and others who are not. I don’t look at him suspiciously at all. It seems to me that the journalism we used to do has a lot of truth, and it has a lot of no truth as well, like the one that is done now. That of “we were the real journalism, and all this is rubbish” is a gaze catteta. The basic code, ultimately, telling what happens to the people who need to know it to have an opinion and exercise their citizen right to choose things, for which they need information, will remain the same. The toys will change, but the substantive elements remain the same. The resistance has changed: 20 years ago there was a very pedantic thought of journalism that looked down on new journalism, and the new media that were emerging. They were considered a journalistic garbage dump, it was idiotic, but it no longer happens.

Will we see him doing streamings on Twitch?

No, but not because I am suspicious of new technologies. I have spent three years traveling the world, interviewing scientists from all over the world, those who are most at the forefront. I have no suspicions, but I am aware of time. Technologies demand a lot of time, and I don’t have that much to dedicate to it. I like to walk, read, listen to music, and I am more aware that I have limited time. Young people also have limited time, but they act as if they don’t have it, so they are able to dedicate hours and hours to it. It is an activity against which I have nothing, but I am not able to dedicate so many hours.

It says that truth and information reach people in other ways. Can you keep talking about what were previously called opinion leaders, or has that role moved to social media?

Yes, now there are many opinion leaders, of very different colors, followed with devotion by thousands of people. A few years ago there were a few names in a few media, which were the reference. Now there are a lot of territories. The key is to inspire confidence, to become a reliable benchmark. In the great Washington Post or in the newspaper of A Coruña, or doing the international information or on the billboard of shows, make your name a name associated with decency and solvency. That is what a journalist has to achieve. In this immense universe full of signals, a journalist and a medium have to be credited as a solvent reference. That will always be the battle.

The fake news Are they tools linked to a specific ideology?

The fake news are a lot of things. On the one hand, the lies of a lifetime, amplified with the new reality. On the other hand, they are an industry: there are people who have discovered that reality and have made deliberate maneuvers aimed at seeking objectives. Industries operating to spread lies. They are a brutal threat, because they produce great mistrust, you do not know or can distinguish what is supported by something moderately credible. Therefore, it is essential to create solvency platforms, although you will not be able to prevent the other from existing. You can fight that, but you can’t stop lies from circulating.

The world will try to hold on to those positions it has chosen, and it will know that there is another disturbance out there, but it will have learned to ignore the first thing that comes along. You will live in that messy universe, with those confidence points. The phrase I say the most is that in flood times, the first thing that is scarce is drinking water. In that flood of informational signs, what is in short supply is that informational drinking water, which is now absolutely vital. The flood will wipe out everything except what floats. It is the world in which we have to live, of that complexity. Everything has changed compared to the time when there were two newspapers, three radios and a television. This has nothing to do with it, it is different for all intents and purposes: what do you do with your money, how do you educate your children. You learn, and you learn without wanting to. In the end, it is incorporated with a certain naturalness to life.