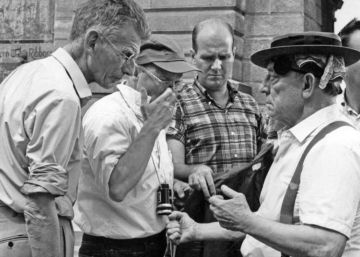 I end the year so overwhelmed by the mountain of news that is announced for the twenty twenty that I decide to dedicate my last December readings to some timelessness, for a change. TO Samuel Beckett (1906-1989), first, a modern classic punished by the market and the mainstream from serialized tastes to a purgatory that moves it further and further away from reissues and readers' knowledge. Some publishers, more than independent, heroic, such as the Segovians of Uña Rota, have published in recent years some of the shortest writings of the Irish, in addition to the very notable Samuel Beckett, the last modernist, the only existing biography in Spanish. In 2019, when they are reading this Armchair (if anyone, etc.) will already be history - and not precisely that which leaves more room for optimism - a couple of important Beckettian moments have been commemorated: the 30th anniversary of his death , of course, and the fiftieth anniversary of his Nobel Prize (1969), that the reluctant winner always lived as a kind of misunderstanding, if not as a curse capable of interfering with his writing. The French publisher Passage (s) has just published In Samuel Beckett's company, a tribute book coordinated by Lois Oppenheim - a world specialist in the dramaturgy of SB - in which David Mamet, Nathalie Léger, J. M. Coetzee, Paul Auster, Philippe Sollers, Georges Didi-Huberman, Philip collaborate, among others. Glass or Peter Brook. While I read in him the admiration of others also woke up mine, asleep or anesthetized because of the "literary" noise of this trade of writing about books in general nothing memorable. “Revisiting” on YouTube Film (1965), Alan Schneider's (nominally) film, based on the only script that Beckett wrote for the cinema (Deleuze claimed that the film was the masterpiece of Irish cinematography), and starring a wonderful Buster Keaton more deadpan (inexpressive) that never, I returned to my memory of a young reader and (still) little estranged, when Beckett seemed to me a kind of Swift that I had read, in addition to Quixote and the picaresque novel, to Schopenhauer before Joyce. Because Beckett is undoubtedly a pessimist, as he continues to show in his late and partially autobiographical (and nostalgic) Company (1979; Anagrama), but a pessimist who is not intimidated by the consubstantial hilarity of the absurdity of the world, which makes him a master of tragicomedy. Perhaps this is why his unforgettable voice is now, when the absurd has prospered to become a threat that is not negligible for the survival of the species, more current than ever; like the one who listens, in a time without time, that figure (I dare not call her “character”) lying on her back in the dark (in Company) and that tells him about his precarious situation and his past.

Second opportunities do not abound. To me, for example, nobody has given it to me in order to correct a regrettable absence on my list of the “best books of the year”. I cannot understand how I did not remember, at the time of writing and sending my list, the enthusiasm with which, in March of (already) last year I referred from this same Armchair of Ears to Border (2019; HarperCollins), by Don Winslow, last installment and closing of the so-called “cartel trilogy”, whose first two novels, The power of the dog (2005) and The cartel (2015), they are already in pocket. For the cheap edition of Border, a very modern “black” epic of Tolstoian ambition — and, believe me, the hyperbole is not so much — you will have to wait a little longer. Harper Collins, who has stayed with Winslow in one of those relocations (or exchange of cards) so frequent in our movidito publishing world, is still making the most of its hardcover edition (958 pages; 23.90 euros). In any case, the novel seems to me a masterpiece of its kind: a kind of (bloody) lily among thistles, to paraphrase, prostitute it, the sense of the famous verse of the Song of songs that also made his (llir between cards) the sublime Valencian Ausiàs March. And do not panic: the last installment can be read independently, well that not a few of his characters appear in the first two. The novel, whose title refers not only to the Mexican-American border, but also to the morals of those who face drug trafficking or suffer its consequences, requires a reading effort that is widely rewarded. It is a work of fiction, but not so much: Winslow, who knows how to make the reader visualize the story (something that Oliver Stone took advantage of for his film Wild, based on another novel of his), he has spent 20 years documenting himself, and he knows almost everything that has happened and happens in the Mexico of the cartels and in the fluid traffic of drugs (now, heroin) across the porous border. There are real characters, others imaginary, but possible, and others with fake names (one, for example, speaks like Trump and says the same nonsense as Trump; that is, it is Trump). And all with that sharp, sharp style, which saves words as if they cost money and penetrates the mind of the reader like a scalpel; and with dozens and dozens of characters that appear and disappear in that all-against-all in which the fight between cartels has become after the disappearance of Mr. de Sinaloa, nemesis and counter-figure of the hard and complex Art Keller, the brand new director of the DEA. At some point you might miss an index of names, a dramatis personae that put order between so much chaos and such abundance of characters. But it is soon discovered that chaos is the form that reality takes in this dark and powerful novel. If you like them thrillers very black, do not miss it, and sorry for my forgetfulness.