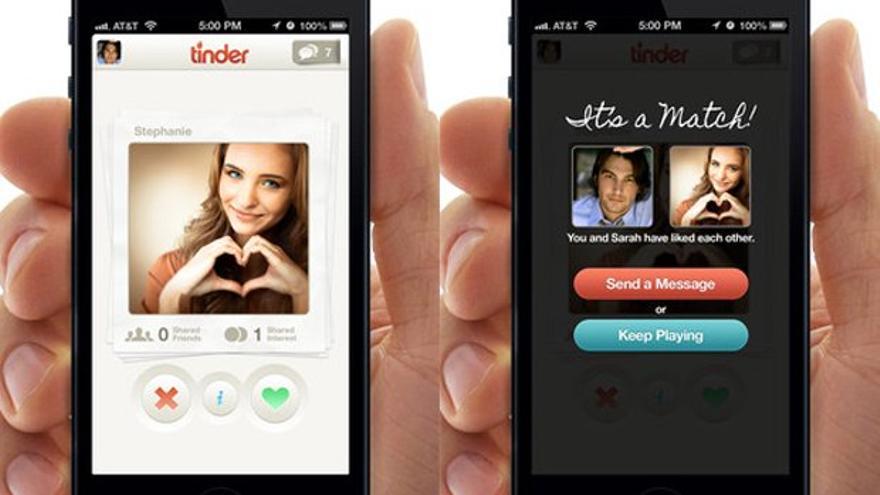 Slide your finger to the right on the mobile screen to show interest in a profile in Tinder It is a registered trademark with judicial endorsement. The Superior Court of Justice of Madrid has estimated the request of the American company Match Group, owner of the application of contacts with more than 50 million users around the world, to register "Swipe Right"as a trademark. The judges understand that this expression, which describes the action of sliding the screen to the right and pointing to the profiles that are liked, is not known by the majority of the population and can be registered by a specific application as a trademark commercial.

The importance of this brand for Tinder's business strategy is clear just by opening its website. "Swipe to the right" is the message that the platform uses to invite the user to open an account. Doing so is the first step for the indicated person to correspond with the same gesture in the user's profile and make a "match" (the signal that warns both that the interest is mutual). Other applications, such as Instagram, also use that system on touch screens to go from photo to photo in a profile. Tinder even explains on its website that it has registered more than a dozen of these terms: "swipe right", "swipe left" or "it's a match!", Which celebrates that the "swipeo" has been mutual.

In the case of "swipe right", the company that owns the application has had to go to court so that the movement of the finger on the phone screen is considered a trademark of Tinder. At first the Spanish Patent and Trademark Office (OEPM) granted the registration, but later it was denied when it estimated a resource from a competitor in the sector: Bumble, another dating app that also has millions of users around the planet and that establishes that only the woman can contact the man once the "match" has been made.

The commercial war between the two dating apps began more than two years ago in our country. In September 2019, the OEPM granted the trademark "Swipe right" to Tinder, but half a year later decided to deny it after an appeal from Bumble. The Office understood in that resolution that it was a term known to the population as a whole, too generic, and that therefore it could not be monopolized by a single company. "The swipe mode of use being an already common tool that is used in different computer applications through which dating services or other services are offered, so that it is an expression that is also recognizable for the average Spanish consumer," he said. the SPTO in March 2020.

The case reached the Contentious Chamber of the Superior Court of Madrid, which has given the reason to Match Group (Tinder) a few weeks ago. The judges of the second section put forward two arguments to declare the right of the company to register "Swipe right" as a trademark: that it is an Anglo-Saxon term that cannot be taken into account due to its meaning and literal translation and that, furthermore, there is no evidence that the Spanish population has this term too integrated into the everyday vocabulary, even to refer to contact applications such as Tinder.

The judgment of the Madrid Supreme Court is not final and can be brought before the Supreme Court by both Bumble and the State Bar, which unsuccessfully opposed Tinder's appeal. The result is that, from now on, the term "Swipe right" is a trademark of this contact app that cannot be used by any other to refer to its operation, although the mechanism to contact another user is exactly the same Same: swipe the screen to the right.

The Superior Court of the capital, with Judge María Soledad Gamo as rapporteur, first analyzes whether "Swipe right" is an expression that must be translated literally to decide whether or not it can be a registered trademark. The two words, "slide to the right" in Spanish, must be understood as a "whimsical or fantasy name or sign, without its meaning in the original language being taken into account unless said word has become integrated into the Castilian language in common consensus ", says the TSJM.

This is not a new jurisprudence in the Spanish courts and in particular the Supreme Court, which will have to review this case if someone appeals. In 2009, for example, the high court already used these arguments to allow coexistence between the brands 'Plus Supermercados' and 'Plus Market'. More recently, as early as October 2016, the same contentious-administrative court allowed a company to register the trademark "Supersoft" to market a type of paper. "It is a foreign word that is not used generically in Spanish to define a characteristic of the product," the magistrates clarified then.

In the case of Tinder, the Superior Court of Madrid also explains that there is no evidence that this expression is, they say, "recognizable by the average consumer of this type of services, with the meaning and mode of use indicated nor, consequently , lacking distinctiveness or merely descriptive of one or some of the characteristics of said services ". The TSJM reproaches the Spanish Patent and Trademark Office for basing its decision on press articles and various web pages provided by Bumble in its claim and prefers to rely on a broader study presented to the judges by Match Group.

The market study provided by the Tinder company, as reflected in the ruling, affirms that 82% of the Spanish population between 18 and 65 years of age does not know the meaning of the term "Swipe right" with an even higher percentage unable to link it to any specific company, brand or application. The ignorance of the existence of the term, according to that study contributed by the interested company, drops to 70% among the users of these contact applications but with the majority unable to associate it with a specific brand or company.

This report has more credibility for the TSJM than the documentation provided by the other company. "We cannot fail to note that, in any case, even if we admit that the terms 'Swipe right' were knowable by the average consumer of the services that the requested trademark seeks to distinguish, what they would describe is nothing more than a functionality on a touch screen and not a characteristic of the type of services offered ", the Madrid superior court also decided. The sentence is still appealable before the Supreme Court both by the application company Bumble and by the State Bar.