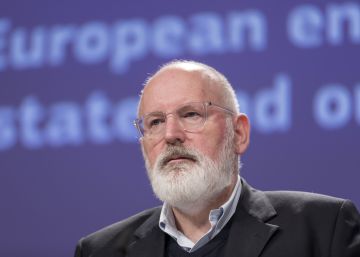 A question flies, with an air of spoilers, the ambitious green plans that Brussels prepares for the next decades. "How much is this going to cost?", The question emerges again and again. The transition to a less carbon dependent economy will not come free. With an automobile industry still very dependent on fossil fuels, and an implementation of renewable energy still residual, the goal of reaching a horizon of climate neutrality by 2050 still seems far and expensive.

The Vice President of the European Commission, Frans Timmermans, responsible for shaping the Green deal outlined by the new Executive of Ursula Von der Leyen, is questioned about its economic impact frequently. And in the press conference this Thursday, after recognizing that public and private investments of "hundreds of billions of euros per year" will be necessary, it has exploded before the doubts raised by the environmental path undertaken by Brussels. "Let me be very clear. What happens if we do nothing? What happens if they are not 400,000 people who die prematurely every year in Europe for the poor air quality but a million? What will be the cost of inaction and having more frequent natural catastrophes? What happens if the cold drops in Spain do not arrive every 15 years but every five months? It is very urgent not only to talk about the cost of that transition, but the cost of not making that transition. "

The Dutch Social Democrat is one of the highest profile men of the new Von der Leyen team. He was foreign minister in his country, vice president under the mandate of Jean-Claude Juncker, and a firm candidate to replace him in command of the European Commission until the French president, Emmanuel Macron, took a helm and decided the balance towards the German Democrat. Faced with the tedious speeches millimetrically sculpted by advisors, Timmermans pulls a personal anecdote to make his statements less abstract, and is able to combine joke and self-criticism by remembering how his son sometimes emulates in a jocular tone those who blame the Brussels bubble of all his ills and calls him "bureaucrat not elected without a face".

This Thursday, asked again about the cost of his plans, he compared the climate crisis with a meteorite to defend the need to invest. "Just imagine that a great comet rushes towards Earth and will hit us in a decade. Would we say then, 'yes, let's do something, but don't alter things too much, please'? No, we would solve it, and the same goes for it for the green transition, we can solve it. "

The vice president has warned that the paradigm shift will be "painful" and "complicated", but believes that Europe can be strengthened by becoming an environmental leader thanks to the creation of new jobs. Above the economic balance, he put forward the benefits of transformation. "As a parent, I find it unacceptable that there are children growing up in cities with poor air quality, harmful to their health, or that the water quality is below the standards of the World Health Organization. I see it unthinkable that we allow the disappearance of species at the rate they do now, "he insisted.

Beyond discrepancies on specific objectives, the discourse of the new European Commission has become practically indistinguishable from that advocated by The Greens in the European Parliament. Therefore, the requirement of coherence has also been raised. And the appellant controversy over the use of two venues by MEPs – in Brussels and Strasbourg -, with the consequent environmental and economic cost involved in the displacement of the 751 europarliamentarians, has returned at the press conference of Timmermans, who has avoided taking sides and has said that it is up to the Member States to decide about.

The environmental bar even reaches the personal life of community politicians. At a time when Swedish activist Greta Thunberg avoids taking the plane to travel because of its polluting impact, Timmermans has defended the greater use of the train, of course, without exceeding certain limits. "They asked me if I would go by train to Madrid. I don't do it because over distances of more than 1,500 kilometers I would spend more time on the train than doing my job. It wouldn't be a rational decision."

The Social Democratic leader believes that the plane makes less sense for journeys such as Brussels-Paris, which does not exceed two hours, and has lamented the disappearance of many night trains. He also referred to the change in culture that society lives with less meat consumption, the proliferation of the bicycle and the loss of importance of the car. "I don't know his case, but my children are no longer interested in having a car. For my grandparents, having a car was impossible because among working-class people a car was a rich thing. For my parents, having a car indicated that they had succeeded in life. For me, a car was a good thing to have. For my children it is mobility. And that will change society and change the car industry, "he said.