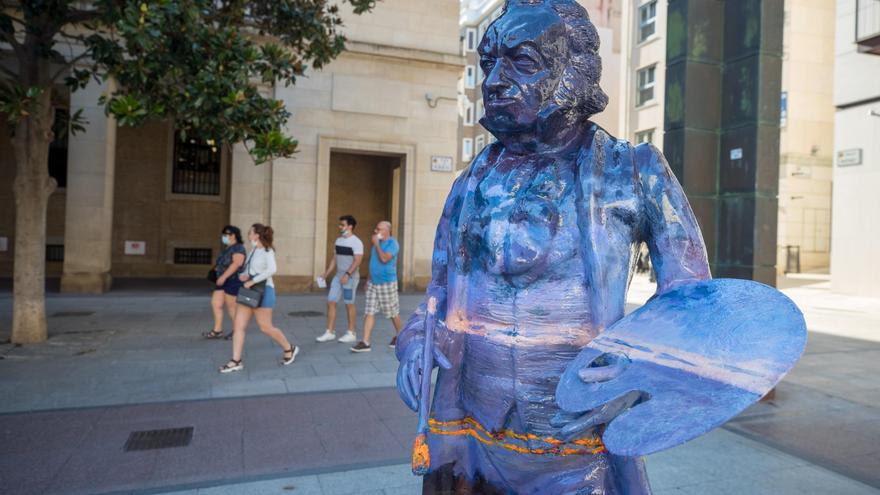 Zaragoza, Sep 17 (EFE) .- The incorporation of eleven new works to the Goya Museum in Zaragoza, three by the Fuendetodos painter, along with three by Francisco Bayeu, three by Antonio González Velázquez and one by Corrado Giaquinto and Francisco Preciado de la Vega, is “a milestone and a very important day” for the museum space.

This has been described by the general director of the Ibercaja Foundation, owner of the museum, José Luis Rodrigo, in the presentation of these new works together with the director of the space, Rosario Añaños, and the specialist doctor in Goya and author of the historical-artistic study of the paintings, Arturo Ansón, who have made themselves known in society this Friday.

These three experts have highlighted that with the exhibition of these eleven works, from a private collection, the exhibition discourse of the Goya Museum is expanded, the dissemination of the work of the Aragonese painter is reinforced and the pictorial collections of the mid-18th century are completed. that add up to 517 works in total.

Rodrigo recalled that with the incorporation of these three new works from Goya’s youth, “Virgen del Pilar with Santiago and one of the Zaragoza converts”, the first painting known and signed by the artist, “San Cristobal” and “Dios Padre y el Holy Spirit in Glory ”, the space houses a total of twenty-three works: seventeen paintings, a drawing and the five large series of engravings.

“I am proud to say that this Museum is Goya’s door in Aragon. Anyone who wants to know Goya’s work has to come to the Museum, which is one of the benchmarks in the world of his work,” said Rodrigo.

He has also expressed his gratitude to the owner and collector of the works for their assignment and their contribution to making them known to society.

In this sense, the works, as explained by Ansón, have not required any type of intervention or restoration for their exhibition and those that were made were a few years ago when the owner acquired them.

The other eight works that are incorporated are: by Francisco Bayeu, “The Virgin and the Child delivering rosaries to Santo Domingo de Guzmán and Santa Rosa de Lima”, “Virgen del Rosario” and “El dios Vulcano”; by Antonio González Velázquez “Flagellation of Christ”, “Prayer in the Garden” and “A young woman offers a glass of wine to a young shepherd”; by Corrado Giaquinto “Apparition of the Virgin to San Felipe Neri”, and by Francisco Preciado de la Vega “Santa María Magdalena”.

These eleven works were unveiled for the first time in the exhibition “The stela of Corrado Giaquinto in Spain: González Velázquez and Bayeu”, since, except for one of them, the rest were absolutely unpublished works.

Most of these paintings correspond to the first years of activity of their authors, such as “Virgen del Pilar with Santiago and one of the converts from Zaragoza”, which Goya made in his time as a teenager with about 13 or 14 years old and that could be previous at the beginning of his artistic training with one of his teachers, José Luzán.

From this work it also stands out that it is a handcrafted piece destined to meet the popular demand for painted images of the Virgen del Pilar that could be purchased at reasonable prices in the temple itself by faithful devotees and pilgrims.

The oil “San Cristóbal” is an unpublished painting by Goya and one of the first that he made during his apprenticeship in the Luzán studio and it is a copy of a work by Francisco Solimena, while that of “God the Father and the Holy Spirit in la Gloria ”the origin is unknown and it would be the upper part of a painting of considerable dimensions, integrated into an altarpiece in the church of a convent or parish in Aragon.

Ansón has highlighted Goya’s admiration for Giaquinto’s work, of which he already knew part before traveling to Rome, where he devoted himself to getting to know it in depth.

Of the set of works, the expert has underlined “the quality, representativeness and strength of the works for the Goya Museum’s discourse”, although he has also pointed out that these are works of youth in which the artist cannot yet be seen in his fullness. but they have “details that make you think you are going to go far.”

Another relevant aspect of the three new Goya paintings in the collection is that “he begins to test solutions that will define his style in the future.”