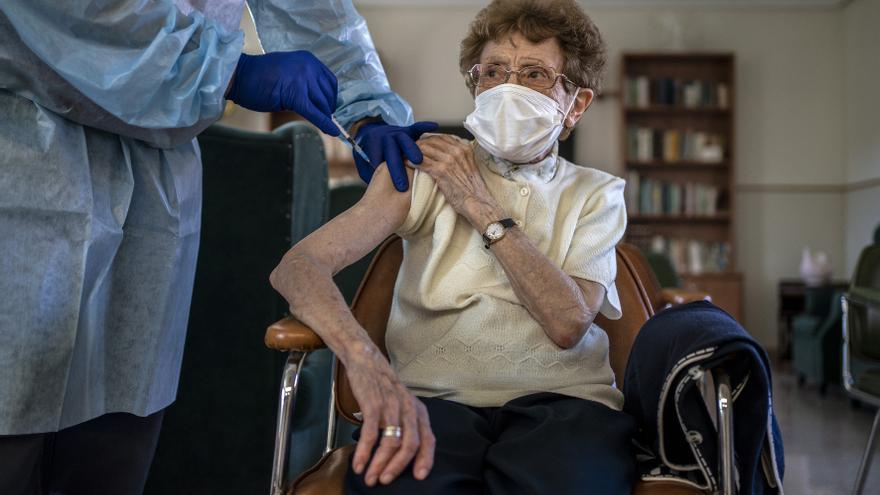 On Monday, April 12, 2021, three and a half months after the first historical puncture to Araceli Hidalgo in Guadalajara, 90.8% of users and workers of residences and institutionalized centers in Spain were fully vaccinated against COVID-19. In Madrid they were 91.4%, 46,794 people. That day, at the same time that the most massive campaign in vaccinations like the Wizink Center and with the majority of the population over 80 protected, Red Cross completed with the second dose of Pfizer to some 60 users who were still missing in a residence near the Colombia subway, in the capital. There were 60 nuns, most of them former health workers, and about a dozen workers from the Our Lady of the Angels Center.

"This is a liberation", said that morning María Fermina (also called Sister Pureza), 86 years old, two in the residence and many as a nurse in a psychiatric center. Sitting in the meeting room presided over by a portrait of Pope Francis and waiting for her dose, she really wants to talk and "keep getting to know things. A little atmosphere. I'm not going to party or anything, just things that concern my age and situation. I have illusions, but not of great things. " On March 6, 2020, the doors of this center were closed, and since then the seclusion turned them into virtual cloistered nuns. "We have gone out to the garden," says María Fermina. Has the wait until the second dose been long, seeing so many centers on television already vaccinated? "Well, we already knew we had to wait," he answers with resignation. That is the general feeling among all: joy, with caution. "Thank you that we can count it," Sister Magdalena sums up in one sentence.

The head of the team of four Red Cross professionals who have come, Álvaro Carmona, explains that what they are doing mostly this month are "rescue vaccinations." This is: going back to centers in which there have been movements (entries, exits, entries) in these months and in which there were people to be vaccinated, or in which there have been recent COVID outbreaks and they could not immunize all the elderly because they did not it is recommended in that situation. Every morning since the end of December they have a list of centers to visit. The time in which they are in each one depends on the situation of the users (more mobility, less) and the number. The Red Cross, with twelve similar teams, has been in charge of part of the vaccination in Madrid since Isabel Díaz Ayuso subcontracted the service; it was the first community to privatize it.

At the Our Lady of the Angels Center there is no "rescue vaccination". On March 6, 2020 they closed the doors because there was a first case of COVID-19. One sister began to have symptoms, the infection was confirmed, and it spread to eight more, who were isolated in one plant. Unlike in so many Spanish residences, the places where the health crisis has hit the hardest, no one died, and since then they have remained free of the virus. "It is not that many visitors come here either, but before that there were some, especially from their brothers, who are older, of the same age more or less as them. No one has entered here since March. Other years they did take them away. on vacation, last summer it could not be and this we hope so ", explains one of those responsible for the center, sister Inés López. "We will wait the 15 regulatory days after the second dose and then we hope that at least here at home we can remove the mask," he adds, as if asking the Red Cross team if this is okay.

The first dose of Pfizer came to an end on March 22, after some efforts from Inés López. In fact, a few days before they had started calling the sisters one by one from the health center. At the first, to Sister Angela, a 103-year-old from Navarra who barely speaks but smiles a lot. "They began to call us from the outpatient clinic, individually, they considered us the general population because we were over 80 years old. And I said no way. If they have to vaccinate 20, 30, 40, leaving one by one, without their own vehicle ... impossible. Fortunately, the efforts worked and they vaccinate us all at the same time. "

Two workers from the center who are not nuns, Carmen and Toñi, have had a somewhat longer wait. They were "amazed" to continue pending while they read in the press that the residencies were ending. "It seemed strange to me because of how it was, people so old without vaccinating in a COVID-free center for a long time. Not for us, but for the sisters. We don't want the virus to return, because if you start with one, whether you want to or not ... ", says the first. "Here a very special bond is created", they tell about the users, and not because of the religious status of the women. "There is no difference with other residences in which we have worked. They never ask you if you are a believer or if not."

For Red Cross workers, these 2021 have not been a regular few months. "We had previously participated in influenza vaccination campaigns, but logically neither at this volume nor at this rate," explains Carmona. Rosa, who is in charge of keeping the injection registry, describes these months as "an experience and a mess". The intensity of the day depends on how many vaccines they have at that time, but at least they always go to a center and "on Friday we were in five. I don't know how many people we have vaccinated. Many. We would have liked them to be even more."

In the Our Lady of the Angels Center they have not had "any problems", but they do not usually. In general, they have been found with very few refusals to be vaccinated, which are also registered before the time of the puncture. "What they ask us especially lately is if it is AstraZeneca, because of the noise that is having. But we are always putting Pfizer, so it does not apply," adds Rosa's partner, Carlos. But in any case, "there are many more doubts from workers than from residents. Some with a lot of sense, basic things about side effects or if something happens because of COVID. Others are more strange, that if the microchip, that if it works for them to sterilize ... ".

"But older people are so happy to get vaccinated to regain their life with their families that they have no problem with us giving them whatever," continues Rosa. "This job is very exciting. They welcome us as if we were very important people to them." His namesake, vaccinated that morning in mid-April, seems to confirm that reception with his summary of the day: "They have done it with affection and it will work for me. Let's see if this has just been fixed."