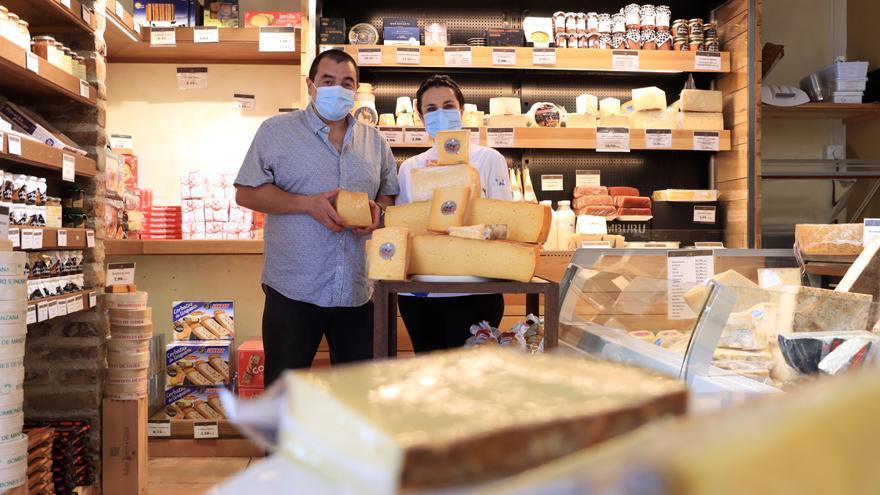 San Vicente de la Barquera (Cantabria), July 18 (EFE) .- A minimum maturation of 260 days in cava at controlled temperature and humidity and 350 kilos of reddish color and origin of pasiego are the figures of the seven pieces with which Tres Valles Pasiegos has made Tudanco cheese the largest in Cantabria.

Made with raw cow’s milk and with the Pasiega Guarantee seal, each cheese has dimensions of 85 by 45 centimeters and only seven unique Tudanco pieces have been made.

The striking reddish tone, both in its bark and inside, is due to the annatto, a natural dye, which also gives it special characteristics.

The artisan Tomás Pérez, author of the Tudanco cheese, has assured in an interview with Efe that behind the elaboration there is a lot of work and study to be able to make a completely different cheese from the other 14 varieties they have.

“It is a cheese that has weighed almost 50 kilos, which has a peculiarity and that is that we have only made seven limited units, all have been bought by Aramburu, and in itself the difference is a longer production process”, two days, maturation apart, instead of the usual six or eight hours, Pérez pointed out.

This cheese can only be purchased at Aramburu stores in San Vicente de la Barquera, Comillas and Suances because its owner bought them “without even tasting them.”

Its author defines Tudanco as a “totally Cantabrian” cheese, made by a small producer who is “very satisfied” with the result and which, in his opinion, can compete with any other.

“We wanted to pay tribute to the typical Cantabrian cow that is the tudanca and that is why we named it, although it is not really made with tudanca milk, but it is a recognition that we wanted to do to something so ours, as Cantabrian as that cow” , has explained.

Pérez hopes to be able to present the Tudanco in a couple of years to a contest or to the World Cheese awards, of which they already have two medals for other elaborations, because he believes that it is a high quality cheese.

The Tres Valles Pasiegos cheese factory, based in Prases (Corvera de Toranzo), has been in the market for 13 years making cheeses such as Oro de Prases and Flor del Pas, and has already set a milestone in Cantabrian cheeses since in just one week it has managed to sell half of the largest pieces in the region.

Artisans by vocation and being “meticulous” in their way of working, using old formulas adapted to progress, this cheese factory also produces typical Cantabrian products such as quesadas or pasiega butter.