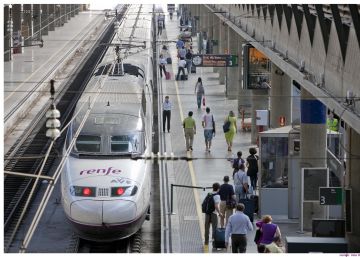 The French public rail company SNCF, a consortium made up of Talgo, Globalia and the Trilantic fund and Intermodalidad del Levante SA (ILSA), a company controlled by Air Nostrum, have submitted their proposals to Adif for compete with Renfe in the main lines of the AVE, as of December 2020, after the deadline to participate in the process expired last morning, they informed sources.

The biggest surprise has been the incorporation at the last minute of Globalia, the group that controls AIr Europe, to the consortium integrated by Talgo called Motion Rail, which will also have the financial support of the Trilantic Europe fund. According to sources, this consortium was born with a vocation to operate in several European countries, coinciding with the liberalization of passenger transport in the EU in December 2020.

The French SNCF, through its Spanish subsidiary Rielsfera, has been the most advanced. From the beginning, he showed his interest in competing in Spain with his counterpart Renfe, and export Ouigo, your low-cost train model, with significant discounts compared to Renfe prices. For its part, Ilsa, who saw how Acciona was leaving the consortium in the process, has now managed to integrate an "important European industrial partner," reports Europa Press.

The railway infrastructure manager Adif said Friday in a note that four companies, including Renfe, had submitted their offers, although the public company did not want to report the names of the candidates "because it has signed a confidentiality agreement with the companies", a spokeswoman said. The lack of transparency of the society chaired by Isabel Pardo contrasts with the actions of other European counterparts such as the United Kingdom who report step by step all the details of the liberalization process and competitions.

In this way, private competition will be introduced for the first time in the three main AVE lines linking Madrid with Barcelona, ​​Valencia and Seville. The entry of companies other than Renfe from December 14, 2020 will lead to a 65% increase in circulation compared to the current offer and a foreseeable price reduction.

Adif will communicate the pre-award before December 15 of this year, and then negotiate with the winners all the framework agreements for the operation of the lines, agreements that must be ready before March 15, 2020.The State has put out three service packages, each with a different number of daily train frequencies, in the three main AVE corridors, the one in Barcelona, ​​the Levante corridor and the one that links with Seville and Malaga.

The first of these packages (called A), the one with the highest number of circulations, is designed for Renfe, since only the public company currently has a sufficient number of trains to cover it. In this way, in practice Adif will have to choose two of the three contestants that have submitted to cover packages B and C.

Renfe has submitted an offer for this package, which means that 104 trains per day are running on these lines, 20% more than it has now. It also plans to launch a low-cost AVE to cover the Madrid-Barcelona line that will begin operating in April 2020, although tickets will be sold as of January. These tickets will have discounts of up to 40% on the current average of 52 euros.

The other two service packages in liza, those destined for competitors, involve the operation of 16 AVE trains per day and five daily frequencies, respectively, by said corridors.

From now on, the period of analysis of the applications by an appraisal commission begins, in accordance with a planned procedure aimed at guaranteeing the transparency, objectivity and non-discriminatory access of the candidates, as reported by Friday Adif .

The commission is made up of three teams of Adif technicians, focused on the administrative, financial and technical evaluation of applications, respectively. All its members must sign confidentiality commitments and declaration of absence of conflicts of interest. In this analysis phase, the documentation received will be assessed from four points of view: administrative compliance, financial capacity, technical capacity and compatibility between requests.

Finally, it is expected that the Board of Directors of Adif AV will issue, in December, the resolution determining the winning candidates to establish framework capacity agreements. This resolution will be subject to the prior communication and approval of the framework agreements by the National Commission for Markets and Competition (CNMC).