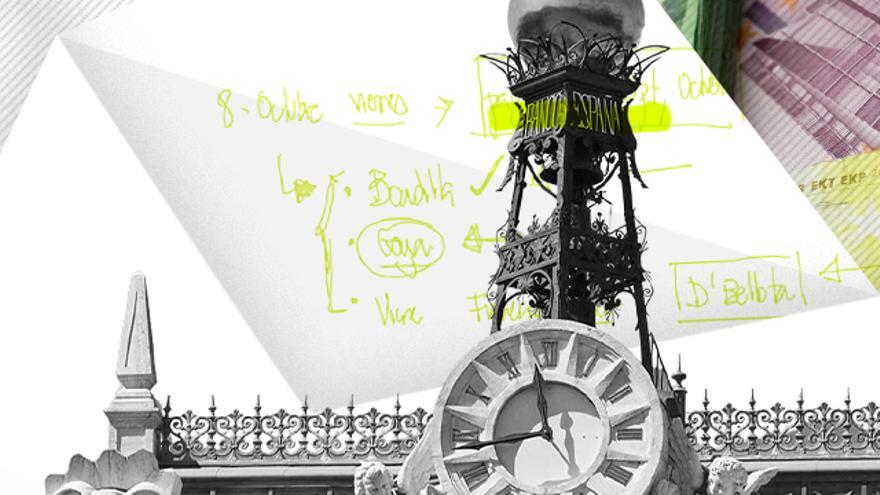 Bank of Spain inspectors have mounted a shadow academy to train opponents who aspire to enter with a permanent position in the entity. Most of the payments to three professionals of the banking supervisor, including Alberto Casillas Cuevas, who is head of Resolution in the entity, are made by hand and in cash, following the instructions that the trainers themselves give their students (this video of elDiario.es is the proof of it).

The clandestine training center, which has no name or is advertised anywhere, has been operating for more than five years – first with face-to-face classes in a place in the center of Madrid and since the pandemic broke out online – and during this time it has always trained and collected with the same methods from dozens of students, according to the testimonies collected by this writing, which has also been a direct witness of the payments to the three teachers.

Of the dozens of applicants to enter the Bank of Spain as inspectors, not a single one has said that they have seen receipts or documents that prove their payments. Students contacted by this newsroom they claim to have paid 10,000 euros for 18-month courses always with the same formula: payments in bills and by hand to teachers. In one of the last cash deliveries, which took place in a ham shop on Fuencarral street, in the heart of Madrid, several of the students gave Inspector Juan Casillas 960 euros each (which comes out of multiplying 160 euros for each of the two subjects taught – Mathematics and Statistics – in the months of July, September and October). The maximum amount set by the Treasury last summer for cash payments is 1,000 euros, as contained in the legislation to combat tax fraud.

A third inspector of the Bank of Spain, Patricia Navarro-Rubio, granddaughter of who was governor of the entity between 1965 and 1970 after serving as Minister of Finance of the dictatorship, has devised in the Financial Systems subject a system of prerecorded classes that sends to his students in exchange for 160 euros per month per head. To play the videos, which can only be viewed for five days, you have to access with a password and a username that appears superimposed on the screen to control that they do not circulate among other applicants who have not gone through the box. This system also makes it impossible to know how many students you have or the income you receive from this second activity.

The three employees have been granted permits to reconcile their work in the banking supervisor with these teaching tasks, but according to the documentation provided by the Bank of Spain, the requests made do not match the jobs they have been performing. The head of the Resolution unit, Alberto Casillas, requested permission to teach at the Center for Professional Studies, an entity that has nothing to do with the private classes that he teaches on his own with the rest of the teachers.

His brother Juan Casillas was granted the compatibility to “carry out a private activity on his own, consisting of the preparation of public examinations” in September of July 2018, when he had already been teaching dozens of students for several years who came to report income of more than 8,000 euros per month.

The same happens with Patricia Navarro-Rubio: she received authorization to teach on her own in September 2020, despite the fact that she had been exercising this activity at least since 2016.

The Bank of Spain does not exercise any control over the classes or the payments that its three professionals receive for preparing opponents who want to access the entity. Nor does it monitor whether the compatibility requests on which it has reported favorably so that its three inspectors can carry out this second activity are adapted to the teaching work they carry out. Agency sources maintain that this is the responsibility of the Office of Conflicts of Interest, attached to the Ministry of Finance., where they allege that any complaint should come from the Bank of Spain.

Twenty-four hours after the revelations of elDiario.es, who has provided testimonies and evidence of the existence of this shadow academy that is charged mostly in cash and that has been operating for more than five years, no body or institution has opened a file or investigation on these practices.

The three inspectors of the Bank of Spain have refused to offer any explanation to elDiario.es.

What follows are the questions that neither they nor the Bank of Spain as an institution nor the Office of Conflicts of Interest under the Ministry of Finance have wanted to answer and that remain in the air.

Why do three Bank of Spain inspectors give instructions to their students from this shadow academy so that those payments, which this wording has been able to verify sometimes are around a thousand euros per quarter and student, are in cash and in person?

Why, according to the testimonies of the students, several of the teachers asked during the confinement to wait for the restrictions to be lifted on those students who proposed to make transfers for the amount of the classes?

Was the Bank of Spain aware of the existence of this training center set up by its three workers to prepare for the entrance exams to the entity?

Did the three inspectors of the Bank of Spain declare all the money received to the Treasury?

Is the Bank of Spain going to require its three professionals to provide their tax returns – since they are not obliged to charge VAT or make invoices – to check whether they declare all their income in cash for the classes they teach and the that no student has a receipt?

Are these three professionals, after the information revealed by this newspaper, the most suitable people at this time to represent the Bank of Spain in the inspection of banking entities?

Is any government going to regulate the private classes given by senior administration officials to opponents who are applying for positions in the same bodies where the trainers work?