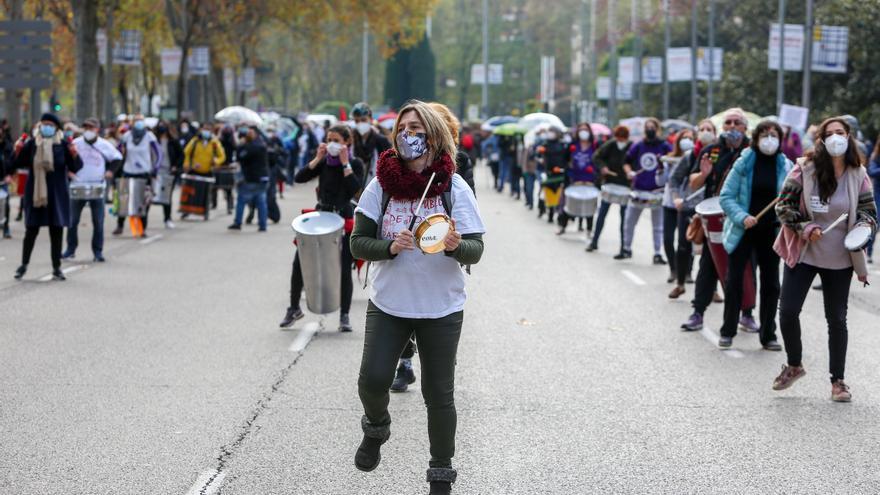 Thousands of people – 10,000, according to the organizers – have joined this Sunday the White Tide demonstration called in Madrid to defend public health and express their rejection of the “brick-and-mortar policy” of the regional government and, specifically, the new emergency hospital Isabel Zendal.

The manifesto that has given rise to the mobilization has had the support of more than 4,000 people and 150 entities, according to the organizers, and reflects the outrage of the sector at “the chaotic and reckless health management of the Government of Isabel Díaz Ayuso”, as well such as his request that he “bet firmly for the reinforcement of Primary and Hospital Care”.

The demonstration has traveled the Paseo del Prado and the Paseo de Recoletos, between the Neptuno and Colón squares, and has moved keeping several columns in single file to maintain the interpersonal distance required by the coronavirus health crisis. The banner on the head had written the slogan “Public health is not for sale, it is defended”, and during the march chants such as “fewer counselors and more nurses” or “fewer flags and less Valdebebas” were chanted.

The representatives of the 13 unions and associations that called the protest have agreed in demanding that the hiring of health personnel be increased and in criticizing the construction of the Isabel Zendal hospital, whose inauguration is scheduled for Tuesday, December 1. “They want to open it to take the photo and they do not have health personnel,” has reproached the secretary general of CCOO Madrid, Jaime Cedrún, who sees the hospital as “an attempt to use and dogmatize public health” and has warned that “it continues without being resolved the lack of trackers “.

His UGT Madrid counterpart, Luis Miguel López Reillo, has said that he is “afraid” of the number of people seen on the streets of the capital, and that Christmas could lead to a third wave of the coronavirus “much worse”, and it has demanded “that they do not deceive us with the data” and that the Primary Care emergency services (SUAP) be reopened.

The spokeswoman for the Sanitari @ s Needari @ s movement, Dora García, has declared that the Zendal is “an insult to the citizenship” and “an expense of money of millions laughing at the population”, and has demanded to improve the working conditions of the health, because “people are leaving” and “you cannot have professionals working for a month, three months, days, weeks.”

“We must reinforce with more professionals and with more means to face not only these contingencies, but also for the day to day,” said the general secretary of the CSIT-UP union, José Ángel Montero, who has taken the opportunity to complain, with regard to future vaccination plans, that “in the end they are made with a long delay” and “the opinion of all professionals is not being taken into account.”

For the vice president of the SummAT union, Rosa López, Isabel Zendal is “an immorality” that “has only served for the glory of Díaz Ayuso and for his friends the builders”, and has denounced that the Summa 112 workers have been offered as “false currency” to handle triage and admission to the new hospital.

“The reason for this demonstration is no longer for labor rights, but for the rights of people who are dying every day,” said Juan Carlos Molina, union delegate of CGT Madrid, who has censured the “disastrous management” of Ayuso and that “the appropriate amount has not been invested in Health.”

The president of the Regional Federation of Neighborhood Associations of Madrid (Fravm), Quique Villalobos, recalled that “Primary Care is absolutely empty of staff”, that non-covid pathologies are “systematically neglected” and that to vaccinate in the future “more health and non-health personnel will be needed.”

Presence of the PSOE, More Madrid and United We Can

The socialist spokesman in the Madrid Assembly, Ángel Gabilondo, has said that “the pandemic has revealed many fissures and weaknesses in the system”, which must have “specific and clear endowments.”

“We have one of the primary care with less budget, with fewer professionals and which not even during the pandemic we have been able to reinforce,” protested the spokesperson for the Health of Más Madrid, Mónica García, who has disapproved of Ayuso’s dedication to “put bricks and finger indecent contracts with friendly companies“.

The spokesperson for United We Can Health, Vanessa Lillo, has questioned the “health populism” that means spending 100 million euros in the “giant refrigerator” of the Zendal, which also “will remove health professionals who are already overloaded in their healthcare centers.

The Australian fund IFM launches a takeover bid on 22.69% of Naturgy for 5,060 million