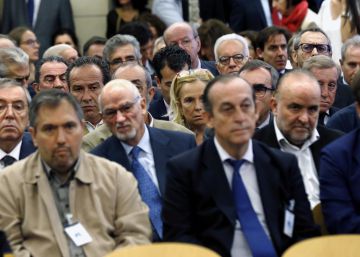 Those convicted in the case of cards black Caja Madrid and Bankia have resorted massively to the Constitutional Court (TC) to try to revoke their sentences. According to data collected by EL PAÍS, at least 25 of the 64 sentenced by the Supreme They have already gone to the court of guarantees. Although, as sources of this body have explained, after preparing the mandatory technical reports, the First Section has gradually rejected its claims.

The high court thus follows the line marked last April, when dismissed the appeal filed by Rodrigo Rato, former president of the financial institution and sentenced to four and a half years in prison for the plot - a pen that he is currently serving in the prison of Soto del Real (Madrid) -. The ex-president of the Government alleged that his rights to privacy, data protection, a process with all guarantees, the presumption of innocence and personal freedom had been violated during the process. But the Constitutional rejected that thesis and did not even admit its appeal for "lack of constitutional significance."

Among those convicted who have gone to the TC are, for example, the four who are still imprisoned: Rato himself; José Antonio Moral, former adviser at the proposal of IU; Francisco Baquero, from CC OO; and Estanislao Rodríguez-Ponga, former Secretary of State for Finance. Y also the 11 that are in semi-freedom regime and that they are only going to sleep in prison.

Abstention of a magistrate

Judge Alfredo Montoya, who belongs to the First Section, asked to abstain in the decision on this battery of resources. According to high court sources, this request was due to the fact that I personally knew some of those involved.

In October 2018, the Supreme Court endorsed the main conclusions of the ruling issued by the National Court in 2017 and imposed sentences of between three months and four and a half years in prison for the defendants. The judges then insisted that those responsible for the entity and the beneficiaries of the cards disposed "at will" of the money in the box for personal expenses "without control of any kind and without fiscal reflection." According to the calculations of the National Court , they spent 12.5 million euros.