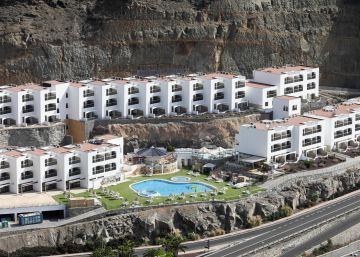 "Thank you, Thank you, danke schön", the singer who entertains the Sentido Gran Canaria Princess hotel responds to the warm applause from the public. Only 15 tables in a hotel with more than 400 rooms listen to these successes today and always as well as the mojitos accompany after a day at the beach. Marmor, Stein und Eisen —Seventy success of the German singer Drafi Deutscher— raises more passions than the Sweet caroline from Neil Diamond, which confirms the comment of one of the waiters: “70% of the customers arrived from Thomas Cook. There are practically no English left and they are not coming anymore. ” The Germans now send, and they like Drafi Deutscher.

The sun loungers by the pool, another indicator of the occupancy level of these mega-hotels in Playa del Inglés, tell the same story: the trick of leaving the towel early and going to breakfast seems unnecessary. At any time of the day couples and groups swirl in front of the table in which the tour operators who brought them to Gran Canaria inform them - through circulars, they are never seen employees - of how the transfer to the airport will be to return to their countries. This Monday, buses are scheduled to pick up almost 100 British Princess customers returning to Birmingham, Gatwick, Manchester and Bristol in the repatriation flights that the British Government has had to organize after the bankruptcy of Thomas Cook.

The fall of the English colossus, known in the early hours of last Monday, it affects 600,000 people who had bought or booked with the company and especially the 150,000 British abandoned in the countries where they were already on vacation. It has swallowed 21,000 jobs. And it has left a bleak picture in the tourism sector of the destinations to which it sent more customers. In Spain, the great disadvantaged is the Canary Islands, where the high season begins in October and lasts until Easter. “It leaves us with very little reaction capacity,” says Francisco Moreno, communication director of the Lopesan chain, which manages 17 establishments in the community.

The tour operator paid hotels and Canarian carriers 90 days, which means that the income of the summer season is in danger, especially in the case of companies that depended heavily on Thomas Cook. In addition, the reserves planned for the coming weeks have evaporated. One in four foreign tourists (about 3.45 million a year) came to the islands with the English group, according to data from the Ashotel and FEHT employers, data that gives the measure of the damage that will result in bankruptcy for the sector. Moreno believes that other tour operators will fill the gap relatively quickly. The big problem, he says, is that the fall of Thomas Cook is associated with the fall of the airlines: "In their planes also traveled passengers who had hired with other operators who now cannot send to their customers."

Nicolás Villalobos, general director of the beCordial Hotels & Resorts chain, agrees with him, for which Thomas Cook accounted for between 20% and 25% of the turnover. “The blow has been hard but mitigated because we saw it coming, we knew we could not depend on them and we diversified, and we had also secured the balances and we will recover 90% of the summer season. Disgust comes when you look forward. The great drama, beyond the commercial downturn, is connectivity. Here we have no AVE or highways, there is no alternative. Flights are our highways with the European continent, ”he says. The sector is very attentive to the effect of the bankruptcy of Thomas Cook. His best-known brand in Germany, Neckermann, has also fallen. Instead, the Condor airline continues to operate thanks to a loan from the German Government. Ving, the brand in the countries of northern Europe, also continues. A respite for Gran Canaria, where more than two thirds of the rooms sold for next season are from the Nordic market.

The workers attend the news with concern. "Last week we were full and look now," says Lorenzo Naranjo, multilingual waiter at La Ciudadela restaurant, on the beach promenade of Playa del Inglés. It is lunch time and there are many free tables. "Not an Englishman," he adds. "If we are five waiters and this can be carried with three ... If there is no job, there is no job," he says. From UGT, José Ángel Ramírez calls for calm: "Having 25% of the market does not mean that 25% of employment will now be lost. I think that the market will have immediate capacity to occupy part of what has been lost".

The ability of hotels to recover from the blow in time To save the season depends on your degree of dependence on Thomas Cook. The Mirador del Atlántico hotel, on Amadores Beach, worked exclusively with a tour operator: Thomas Cook. On Thursday there were only a score of occupied rooms, so management decided to move customers to their other establishment, located a little higher, and close waiting to recover the occupation with the arrival of the Nordic clientele inside of two weeks. To remain open was to lose money.

The president of the Canary Islands, Ángel Víctor Torres, said on Saturday that companies affected by the bankruptcy of Thomas Cook may temporarily defer Social Security payments as a measure to preserve employment.