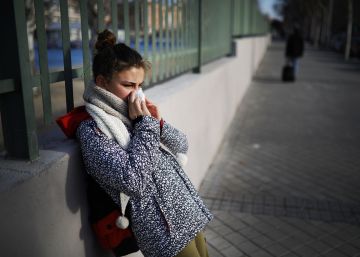 The WhatsApp group of the four-year class of the Vázquez de Mella school in Madrid has been dripping with similar messages for several weeks: "Tell the teacher, the child will not go today, he is ill, he has ...". Symptoms vary —tos, mucus, fever more or less high—, the child's name too.

In this Madrid school there have been decimated classes, although in the consultations the pediatricians do not tell the fathers and mothers if the symptoms (in general mild) can be attributed or not to the flu epidemic, and ask them to stay alert to possible complications and come back if the situation worsens. "As the low fever with paracetamol and ibuprofen and not much more can be done, mine were sent home and not tested for the flu," says Jutta G., who has two children aged four and six years old. this center Last week they both chained symptoms, the oldest with a fever that exceeded 39 degrees, but they are fine.

In the nearby La Paloma school, of the 25 students of the four-year-old children's class, last week there were days in which only 11 went. classes continue normally and they are given homework on their way to recover, ”explains Lourdes Sanz, their head of studies. While Wuhan's coronavirus arrived at their homes through the media, the influenza virus did so on board his body.

The epidemic is being taught in recent weeks with children, who are usually the group with the most cases, although not the most serious. This year, in the absence of the end of the season and the data are closed, the incidence in children under 14 is being even more pronounced.

The latest figures from the Flu Surveillance System (SVG) of the Carlos III Health Institute, published yesterday show the highest figures since the epidemic began -on January 9-, 271 cases per 100,000 inhabitants. In children between zero and four years, it exceeds 800, and among those under 15, 700.. The rise curve is very similar to that of last year, but if you compare the peak of 2019 with the highest figures for this year (at the moment, those corresponding to the last week) it is verified that in the general population a 6% and while the percentage increase in children is triple.

The situation is affecting both schools and medical consultations. Irene Maté, pediatrician of the Community of Madrid, explains that she and her colleagues have noticed an overload of work that is not being supplied with more professionals at this level of care. "From what we see, I think that this year among children is not having very serious symptoms, but they are lasting a long time, with fevers that extend to seven days, parents bring it two or three times in the same episode, which collapses the consultations, ”explains the doctor.

In spite of everything, "it is within normal limits", says Amparo Larrauri, coordinator of Epidemiology at SVG. "In recent weeks it has begun to proliferate more among children because the epidemic began with a greater presence of the variety A (H1N1) and that of B has grown, which usually affects children of school age," explains this specialist , which foresees that in the coming weeks it will begin to remit. In the United States it is the first time in almost three decades that B is predominant, which is causing a great epidemic among minors. In Spain, as has been the case in recent years, it begins with high rates of A infection, and B gradually begins to open as the season progresses. At the moment, however, it is not the majority, as in the United States.

The explanation of the half-empty classes is that the varieties of the circulating influenza virus are known to adults, who have already developed defenses for them. "Above all, they affect children because they are not prepared and the virus attacks who can before," says Iván Sanz, Scientific and Virological Surveillance officer at the National Flu Center in Valladolid. He insists that the spread of the epidemic in children is not extraordinary. "The flu is a disease of children that kills the elderly," adds this expert. Although minors, with an immune system in full adaptation, are more likely to become infected, the elderly or people with previous pathologies, when they suffer from it, have a higher risk of mortality.

It is still too early to know the lethality of this year. Sanz expects that it will not be very high at the end of the season (usually above 0.1%, about 6,000 deaths, mostly in people over 60) precisely because the viruses that circulate are known . In addition, they coincide with the strains with which the vaccines have been made, something that does not always occur, since they are manufactured around predictions that sometimes fail, as happened two years ago.

“When the strain H3 proliferates, which has been circulating since 1968, the mortality of the elderly increases. The concept of natural antigenic sin is talked about: the first flu that affects a person's brand forever is especially protected. It is an idea that still requires a lot of research, but that gains scientific acceptance, ”continues Sanz. This would explain that mortality in older people when that variety proliferates, since it did not exist when they were small and had not been exposed to it.

Vaccination against influenza in children is not in the Spanish vaccination calendar or in the autonomous communities, although recommended by the World Health Organization (WHO). “A third of the countries of the European Union are already doing it and I believe that the future of Spain will go there,” says Javier Álvarez Aldeán of the Advisory Committee on Vaccines of the Spanish Association of Pediatrics (CAV-AEP).

In the United Kingdom, for example, it has been included in the health benefits service since 2019 for children between two and 10 years old. “It provides direct protection to children, helping to prevent a large number of cases of influenza; In addition, it provides indirect protection by reducing the transmission of children to others, adults and those in clinical risk groups of any age and avoiding cases of severe influenza and disease-related deaths in older adults and people with clinical risk factors ”, Explains the British health department.

In Spain there is no consensus among specialists to apply this measure, since it would require a vaccine every year that is not entirely effective and that would be a huge financial outlay for the state coffers. For the moment, children who have certain previous pathologies or who are in contact with people at risk in their families should be vaccinated.

Japan carried out a school vaccination campaign in 1977, which significantly reduced the incidence, according to Enrique Bernaola in a study. “What is even more relevant, decreased overall mortality in Japan for any cause. This campaign was suspended after 10 years and the global flu-related mortality figure increased significantly, ”he explains. One of the reasons for abandonment was the adverse effects of vaccines, which, although very scarce, vaccinating a very large population added cases that generated social rejection of immunization.