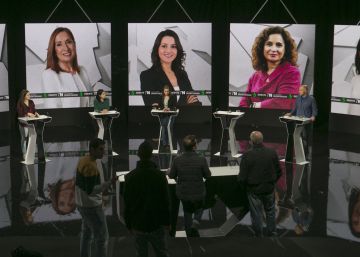 There are five lecterns of one meter and one centimeter high on the set, a space of 600 square meters these days turned into a very clean mass of straight lines and angles, like a Zaha Hadid design with neon touches. Behind the lecterns there are five people and behind them, a photo of the influential woman in politics that everyone is representing in the rehearsal yesterday morning. From left to right, the screens show the faces of Irene Montero, parliamentary spokesperson for United Podemos; Ana Pastor, former minister and former president of the Congress; Inés Arrimadas, spokesperson for Citizens in Congress; María Jesús Montero, acting finance minister, and Rocío Monasterio, leader of Vox in Madrid. All of them, except Monastery, are also candidates for 10-N.

At ten o'clock tonight, in La Sexta, they will star in the fourth and final debate of this electoral campaign, organized by La Sexta and directed by the journalist Ana Pastor.

The doubles gesture as politicians while the 12 cameras on the set are being tested. One is on a crane, which is normal in electoral debates. Others, two traveling; Something less typical. “The advisors ask us what we want it for, and the answer is that we need it to have a camera that can move and capture all participants from specific angles. If for example Albert Rivera pulls out a very long paper list, as he did last Monday in the candidate debate, you don't just want to see the list, you want to see the reaction of others, ”explains Gustavo Vázquez, deputy director of LaSexta News and usual director of house debates.

This type of nuance has become more important as the debate in Spain has been taking place. “Until recently, when they were those face to face that was done in their day, the listening plans, which show who is not talking, were minimal. The advisors sneaked into the control room and measured the plans of their candidate and the other, seeing that they were the same, ”recalls Vázquez.

The holding of so many elections in a row is a phenomenon almost exclusive to the last four years, but more so is the proliferation of televised debates that has accompanied it. In a one-week campaign, we will have four debates in different channels: among TVE spokespersons on day 1, another among the eight parties with the highest parliamentary representation on 2, among the five candidates on Monday and now this one, to which women will exclusively attend, That will complete the round. The same number as in the two weeks and peak that lasted the campaign of the April generals.

The more you practice, the less impositions come to the screen. The Sixth, the private chain that has held more debates in recent years, dispenses with clocks that measure the time of intervention of each candidate, the historical obsession of the advisors. “The one who speaks less does not make it worse than the others,” says César González Antón, director of LaSexta Noticias. “We seek balance, but not accuracy. That creates more freedom, because the candidate is not aware of the time: unless you are a radio television professional, it is difficult for you to know how much it is to talk 30 seconds. And the presenter can play with a dynamic based on what is happening. There is no reason to cut a topic if the debate is interesting, or extend it if it is boring. That makes the debate something organic. ”

Tonight's has the uniqueness that all the participants are women, something that the organizers swear, has come out by chance. “We told the candidates to send us their best player. The first two confirmations were women, and the parties are always waiting to see who the others send, ”says González Antón. "In the end it ended up being a debate of five candidates, we will never know why."

Ana Pastor, the house journalist, who will lead the debate from that set, usual for her program The objective, He adds: "The challenge is greater for them: show if they are able to contribute something other than what we hear on Monday."

A conversation reveals a new relationship in ‘OT 2020’: Nick and Samantha

Glòria Serra clarifies her ‘powers’ to stop a cow