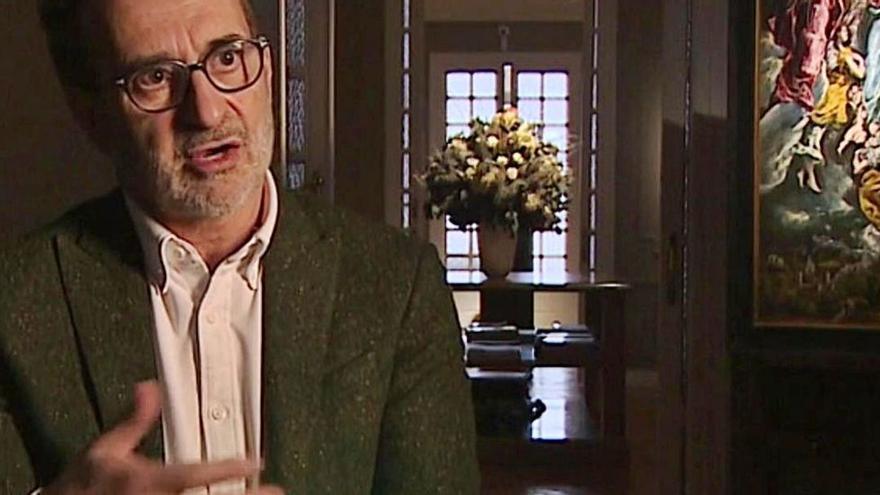 The program in question was the veteran ‘Weekly Report’, which dedicated one of its reports, ‘The chiaroscuro of lot 229’, to the discovery of ‘Ecce-Homo’ and the subsequent stoppage of its auction by order of the Rating Board , Valuation and Exportation of Historical Heritage Assets, in a case that has unique parallels with that of El Greco de los Selgas.

Throughout the report, several experts talk about the relevance of Caravaggio’s painting and the unique circumstances of its discovery. Among them, figure Jose Antonio de Urbina, the director of the Madrid gallery Caylus. Located in the exclusive Salamanca neighborhood, the gallery specializes in old Spanish and Italian painting, and has had a reputation in the art market for decades. Among its milestones, highlights its mediation in the sale of ‘La Condesa de Chinchón’, by Francisco de Goya, for 26 million euros in 2000. The buyer was no less than Prado National Museum, which recently has just acquired another work by the divine Aragonese: the ‘Aníbal victor’ that the Selgas-Fagalde Foundation sold, for 3.3 million euros, to the Association of Friends of the great national art gallery.

In the television program, José Antonio de Urbina first appears in an office in his gallery, reviewing an art book. Soon he is seen speaking to the camera, in a very careful frame. De Urbina is sitting in a Caylus room. Behind him, an open door widens the space, almost as if it were a nod to Velázquez. To his right, a crucified Christ attends the interview in mourning. To your left, well lit, is the ‘Inmaculada’ del Greco.

After the stellar reappearance of El Greco in ‘prime time’, this newspaper contacted the Caylus gallery yesterday to inquire about El Greco. In a first communication, via telephone, the gallery showed its knowledge of the Asturian connection of the “Immaculate”. Four hours later, via email, the gallery sent a clarification: “Excuse me, but this painting is no longer for sale.”

The reappearance of the painting in the Madrid gallery is still significant, since since THE NEW SPAIN uncovered on December 9 the intention of the Selgas-Fagalde Foundation to sell the ‘Immaculate’ to the Museum of Fine Arts in Budapest, it had not been reported that the canvas had left the regional territory. Moreover, it was assumed that he was still guarded in the Quinta de los Selgas, in El Pito (Cudillero). This movement, in fact, results in one of the gaps in the management that has been made of that heritage: since the Selgas collection is not cataloged or protected by any of the safeguarding figures established by the Law of heritage of 1985, its owners do not have to request the corresponding permission from the Principality if they want to remove the works from Asturias.

“I do not hide”. This is clearly stated by the former mayor of Cudillero and current municipal spokesman for the PP, Ignacio Escribano, in reference to the vote at the meeting of the Selgas-Fagalde Foundation board in which in 2017 the president, Gregorio Peña, was empowered to sell works of art owned by the Foundation, such as published THE NEW SPAIN.

“At that time it was explained to us that the financial situation of the Foundation was very complicated,” explains Escribano. These economic problems were caused, according to Escribano, “by defaults on the lease contracts of a hotel in Seville and a property on Calle Velázquez in Madrid.” The Foundation, which owns these properties, was owed various rents. At that meeting on December 11, 2017, it was unanimously approved to “authorize” the sale of Goya’s “Aníbal victor” painting.. Escribano insists that this authorization was approved and not the sale of Goya’s painting. “Both the president and all the employers understood on that occasion that it was the last option to achieve the economic viability of the Foundation,” emphasizes the former mayor.. In addition, he adds another nuance, “the record reflects that work can be sold as long as the law is complied with.”

The former mayor of Cudillero maintains that the sale of any work of art was not approved at that meeting, but the authorization to do so. “When the painting has been sold it is now and that is why we want to know the opinion of the current mayor,” says Escribano in reference to the socialist Carlos Valle.

The former mayor of Cudillero considers that “if the Foundation has made the painful decision to sell the painting it is because they had no other choice, I do not question it”, but he wants the current mayor to explain his position in the meetings of the board of trustees of which now part. Escribano has submitted several questions to the municipal registry on this issue, but has not received a response. Yesterday, a municipal plenary session was held, but there was no occasion to talk about it. It was an extraordinary plenary session on municipal budgets in which, according to the regulations of the local administration, requests and questions are not allowed, nor are questions outside the municipal accounts being introduced into the debate.

Goya’s painting has been sold to the Asociación de Amigos del Prado for 3.3 million, and the Foundation communicated its intention to sell another jewel to the Budapest Museum, an “Inmaculada” by El Greco. The Ministry stopped that operation.

The current mayor partially revealed the minutes of the 2017 meeting attended, in addition to the private employers, Jorge Fernandez Bleeding Y Antonio Nistal, Vicar General and Treasurer of the Diocese of Oviedo, respectively; Santiago Garcia Granda, then rector of the University of Oviedo, and Ignacio Escribano. Valle attacked Escribano, “it is he, as a representative of the City Council and the Government of Asturias, who votes in favor of the agreement for the sale of Goya’s ‘Aníbal’ and, eye, as well as any other work.” Escribano acknowledges that he voted in favor of “authorizing” the sale of the work and demands to know what the current mayor has done.