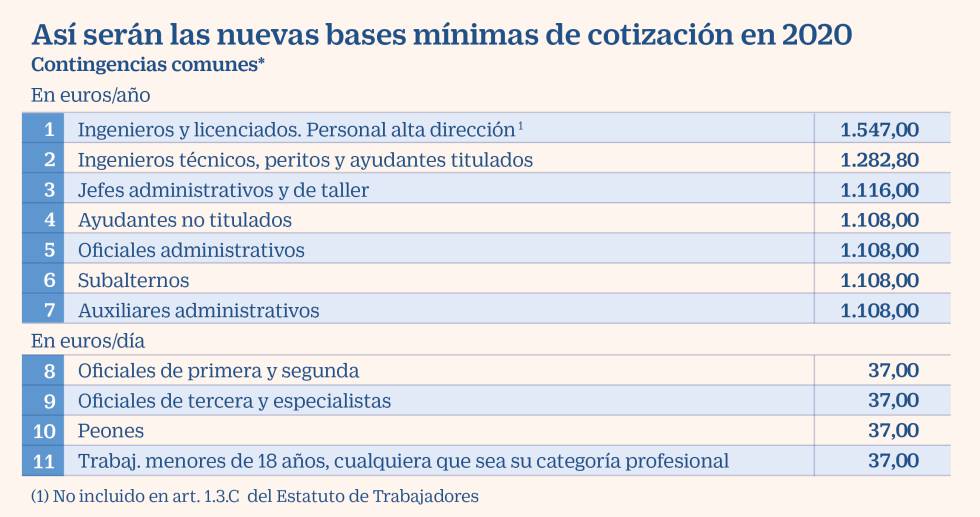 The Ministry of Labor already has the wording of the Draft Royal Decree that will regulate the minimum wage in 2020. The text, which was released this Friday to meet the procedure of public hearing of all the rules at least seven days before its approval in the Council of Ministers, includes the increase of minimum interprofessional salary (SMI) from 5.5% up to 950 euros per month (13,300 euros per year or 31.6 euros per day). This Royal Decree will be approved, according to the Government’s plans, on February 4 and will be applied retroactively from January 1.

But, in addition, the mandatory memory of the impact that this rule will also have published this Friday, calculates how much Social Security will collect for this increase in the SMI, since the minimum contribution bases to the system are related to the amount of this minimum income. And it also determines the income limits to access unemployment benefits managed by the State Public Service (SEPE).

In this way, the minimum contribution base to the Social Security It will be set this year at 1,108 euros compared to 1,050 euros last year. The new amount is the result of dividing the new annual minimum wage (13,300 euros) by twelve months, which is the frequency with which contributions are paid. Although, the Executive must confirm this exact amount.

These 1,108 euros per month will almost certainly be the minimum base of contribution groups 4 (unqualified assistants) to 10 (pawns) and also that of group 11 (workers under 18, whatever their professional category), ” whose minimum base coincides with that of the SMI or they are in an interval close to the SMI, ”says the text of the report known on Friday.

In the case of the three main contribution groups, their minimum bases are higher than the minimum interprofessional salary but, according to the law, they must increase by the same percentage as the SMI does. In this way, the minimum bases of group 3 (administrative and workshop managers) will go from 1,057.80 to 1,116 euros per month; those of group 2 (technical engineers, experts and qualified assistants), of the current 1,215.90 euros will increase to 1,282.7 euros; and for those of group 1 (engineers, graduates and senior management personnel not included in article 1.3.c of the Workers’ Statute), the minimum base will rise from 1,466.40 euros to 1,547 euros per month.

Likewise, the percentage of increase of the SMI will be applied to the same groups of the Special System for Agricultural Workers, both those who pay for monthly wages and for actual hours worked. And also to the contribution base of the Special System for Household Employees, whose minimum contribution base is set according to this Royal Decree Project at 7.43 euros per hour actually worked.

As for temporary and temporary workers whose services to the same company do not exceed 120 days they will receive together with the minimum salary of 950 euros, the proportional part of Sundays, holidays and extra payments, “without the amount of the professional salary may result less than 44.99 euros per legal day in the activity ”, states the standard proposed by the Ministry of Labor.

Finally, the law again specifies that in the amounts of the minimum wage for days or hours only the remuneration in money is computed, without the salary in kind being able, in any case, to cut the minimum amounts established in money.

With these increases in the minimum contribution bases derived from the rise of the SMI, Labor estimates that Social Security – which now has its own ministry – will enter some 247 million euros more

Specifically, they have estimated that each point at which the minimum contribution bases in the General Scheme increase (excluding special systems) will seek an additional collection of 28.9 million euros.

As the increase in SMI is 5.5%, this amount must be multiplied by 5.5, which would yield a total of 158.9 million euros in total for this Regime alone.

Finally, the State (under the Public Employment Service) must also enter Social Security for the recipients of unemployment benefits and benefits. Specifically, 52.5 million more (9.55 per point of increase), according to Work calculations.

Along with all these calculations, the Royal Decree also stipulates the new income ceilings to access unemployment benefits, the subsidy and agricultural income and active insertion income.

In the most bulky case of the unemployment benefit recipients, the access income limit goes from 675 euros per month to 681.75 euros. While access to the agricultural subsidy is set at 909 euros per month. With this increase in income ceilings for access to assistance, at Work, he estimates that the number of beneficiaries will increase, but “in a small number of people.”

The new regulation of the minimum wage does not clarify, however, what kind of supplements and salary bonuses are compensable and, therefore, are taken into account to reach the new minimum wage and which are not. This is an issue whose legal wording has given rise in the last year to contradictory sentences. Although the last pronouncement of the National Court considered that all the complements, including the productivity premiums, are compensable. “An important opportunity to clarify this point in the norm has been lost,” Pérez-Llorca’s labor partner, Daniel Cifuentes, considered Friday.

The text known on Friday reproduces, therefore, the wording of the previous regulation of the minimum wage regarding salary supplements, so companies and workers must wait for the Supreme Court to rule on this matter and determine which bonuses are compensable and which not.

This regulation also repeats one of the exceptions in the application of the interprofessional minimum wage: when the SMI is used in non-state standards (regional and local) as a reference for the granting of social assistance and in private relations. In those cases, the reference to the SMI will have a different value depending on the time of entry into force of the standard in question. Thus, for the autonomous and local laws in force on January 1, 2017, the reference amount will be 655.20 euros per month; For non-state regulations and private contracts that entered into force or were concluded after January 1, 2017 and are still in force, the reference value will be 707.70 euros; and for those that entered into force or were held after January 1, 2018, 735.9 euros.

In memory of the impact of the rise in the Minimum Interprofessional Salary (SMI) to 950 euros per month (13,300 euros per year), the Government recognizes certain possible negative effects of this increase on employment. Specifically, they indicate that “in a labor market such as Spain, with such high temporality rates, it is foreseeable that the possible effect on casualties will occur more through the termination of the temporary contracts in force than through dismissals, for which will necessarily take place with a offset. “