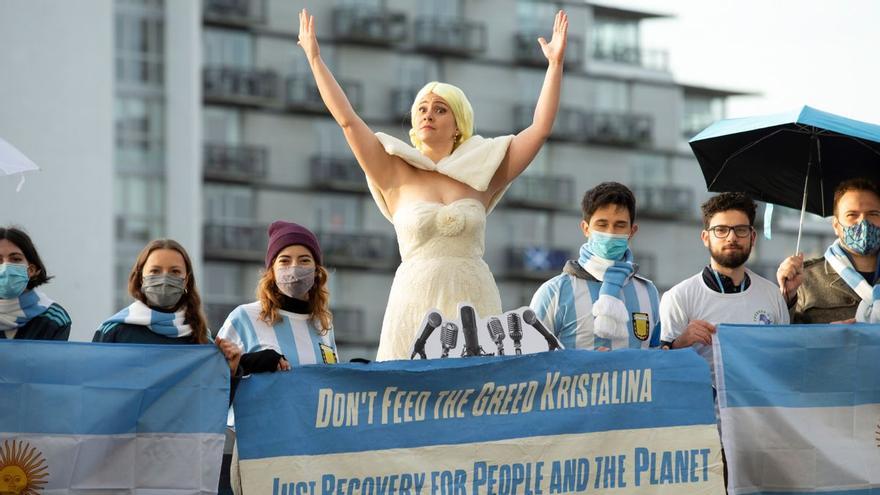 These are some of the youth of the Climate Summit and this is your message to negotiators.

“An inclusive look is missing”

“I am concerned that the Climate Summit negotiations do not take into account the human rights perspective, because if we are here it is precisely to protect the rights of the people “, he explains Ana Quezada, member of the ‘Youngo climate’ platform. When there are only a few hours to go before the final agreements of the Glasgow, the young environmentalist denounces that at no point in the debate was taken into account how the climate change affects different sectors of the society. “They are legislating on forests without taking into account the perspective of indigenous people. They make decisions about pollution without taking into account that some measures may further impoverish the poor“, he comments.

Quezada also speaks as a reporter for the ‘Noticiero Climático’ portal, an initiative created to “explain to people, through accessible language and without technicalities, how to survive the climate crisis“. The activist recalls that in many parts of the world there are still a huge gap in education and access to information that generates great inequalities between those who understand the problem and those who do not. “In many regions of the global south, internet access remains a privilege that not everyone has. The question is: how do we get everyone to understand the risk that pollution poses to their Health? Or how to adapt your work to extreme heat conditions? “, reflects the young woman from the corridors of the Climate Summit.

“This crisis has many faces”

“Youth deserve to be involved in these conversations because we are talking about issues that will shape our future. Our perspective, our ideals and our voices are not being taken into account “, he claims Antonio Muñoz Carrasco, member of the Costa Rican delegation and of the network of ‘Jóvenes por el Climate‘. The young man speaks strongly of his commitment to environmental policies. “As a citizen of the global south I do not I want to be considered a victim of the climate crisis; I want to be part of the decision-making process to help solve this problem, “he explains decisively.

Antonio Muñoz Carrasco, member of the Costa Rican delegation and of the ‘Youth for Climate’ network. Valentina raffio

Carrasco explains that, from the other side of the ocean, the debate on the future of the planet looks very different. “In my region, Latin America, the climate crisis has many faces. We see it when floods, droughts and storms increase. But we also see it when these natural disasters increase the poverty and precariousness of the most vulnerable groups in our society “, says the young ecologist.” For me the climate crisis also has the face of a child who cannot access a dignified lifeto. Or of a family that has lost everything after an extreme flood and he has no other option but to migrate, “he says.

“We can make a difference”

The exclusion of young people from the Climate Summit bothers, and greatly, a generation that has “put great pressure on governments to increase their climate ambition and has staged massive marches around the world,” explains the Costa Rican environmental activist Kirsten White Jarman. “We have been told that to make a difference we had to wait to get older but this is no longer the case. When the global climate strikes started, those of Greta Thunberg, I saw that I also have a voice and I can use it to save the planet“explains the young woman with eyes full of illusion.

White speaks with conviction of the power of young environmentalists to change the world. “In my school we have carried out garbage collection and reforestation campaigns. If these small gestures spread I think that together we can make a difference“says the activist from the corridors of the Glasgow Climate Summit.

“We have seen many words and few actions”

“It was said that this Summit was going to be the most inclusive of all but neither youth nor indigenous communities have been able to sit at the negotiating table. It has been disappointing to see that even the delegations that have integrated these groups into their work teams have not allowed them to participate in the debate either, “he says. Gerardo Ramirez, from the platform ‘Reaccion; Climate Action Network ‘. “The youth of Latin America have a voice, a claim, some ideals. We need the agreements to integrate this perspective. So far, after 26 Climate Summits, we have seen many words and few actions,” says the activist.

In a world where there are still many who deny the reality of the climate crisis, Ramírez speaks of the humanitarian crisis that climatic extremes are unleashing in the global south. “In Latin America there are more and more displaced people; people who are forced to migrate because a drought has affected their territory. The climate crisis is also increasing the rates of poverty and inequality,” he says. “You have to stop thinking. that fighting the climate crisis is a question of a single political color, something loaded with ideology, and to begin to see this as a question of human rights “, ditch.