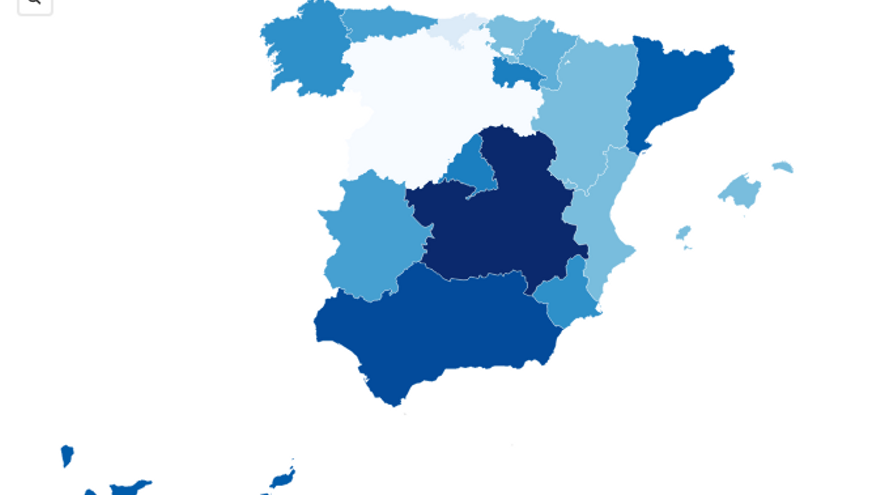 A “lost decade”. This is what the last ten years represent in terms of public health investment in Spain, as Amnesty International has denounced in a new report it presents this Wednesday. The organization warns that, after the cuts that caused “the collapse of spending” and despite the progressive improvement, the levels of 2009 have not yet recovered. Since that year and until 2018, the latest for which data is available, Public health spending has gone from 70,672 million euros to 62,750, so it has dropped by 11.21%, according to its analysis. A situation that “has acquired an even greater relevance and dimension” in a context such as that of the health emergency caused by COVID-19, laments the NGO.

To arrive at these figures, Amnesty International has adjusted the official data provided by the Ministry of Health each year to inflation, and that without doing this, they did represent for the first time in 2018 a greater investment than in 2009. The organization considers that Crossing the figure with inflation is more rigorous because it implies “a more realistic image.” His radiograph, prepared based on different indicators, concludes that only one autonomous community, the Balearic Islands, stands at levels of public spending similar to ten years ago, specifically, it invests 1.76% more. Ceuta and Melilla also far exceed it and exceed 13% rise.

All the other communities spent in 2018 less than in 2009 following this criterion, despite the fact that, in general, budgets have been progressively scaled since 2014. Castilla-La Mancha, Asturias, La Rioja, Galicia and Catalonia are the autonomies that they are further away, with reductions exceeding 12% and even 18% in the case of the first one. On the other hand, some other territories such as Cantabria, Castilla y León or Navarra are closer to the 2009 levels, since they invest between 3 and 5% less than then.

Source: Amnesty International, with data from the Statistics on Public Health Expenditure (EGSP) adjusted for inflation

If you look at the public health expenditure per inhabitant, the trends are repeated when experiencing a reduction of 10.5% in this time, according to the evaluation of the NGO. In other words, the Spanish State spent 1,248 euros on each person in 2018, 147 euros less than those invested in 2009. No community has recovered since 2009: the range is very wide and ranges from -0.36% in Castilla y León at -16.4% in Castilla La Mancha, which is the least invested in 2018 compared to a decade earlier. It is followed by Andalusia with a difference of -13.59% and the Canary Islands with -13.3%. Taking into account the data without adjusting for inflation and encompassing both public and private investment, there were 2,221, 130 more than a decade ago.

The organization denounces that this “disinvestment” specifically linked to the “austerity policies” carried out after 2008 implies that the right to health “is at risk in Spain” because it has caused “a deterioration in accessibility, affordability and quality of health care “that affects, denounces, to a greater extent, the most vulnerable people. This is even more so considering that in the last ten years, the report states, GDP has increased by 8.6%, but it has not been an equivalent rise. On the contrary, private health spending has increased in this same period of time, reaching 16.28% more, the NGO points out.

The report also analyzes the conditions in which Primary Care is found, key piece to stop coronavirus outbreaks that they are occurring in the so-called ‘new normality’ and that they already exceed 100, according to Health. Amnesty International lists it as “the great forgetfulness” and one of the areas hardest hit by the cuts. In fact, investment in 2018 has been lower both in real terms and adjusted for inflation. With this last mechanism, which the NGO considers more rigorous, public spending has decreased by 13%, going from 9,346 million in 2009 to 8,122, despite the fact that in recent years it has been gaining ground.

By communities, again only one community, in this case the Region of Murcia, and Ceuta and Melilla, have exceeded the financing of a decade ago: Murcia, 6.92% more; Ceuta, 0.36%; and Melilla, 8.62%. On the other hand, the greatest falls were registered precisely by Aragon and Catalonia, which invested in Primary Care, the gateway to the health system, 22% and 24% less respectively. These are the two territories that today are home to the COVID-19 outbreaks that are most worrying and that have forced in the first case to reverse phase 2 and in the second to toughen the confinement of 150,000 people in Lleida. From the data of infections confirmed by Health in the last 24 hours, Catalonia and Aragon take more than half.

Along with these indicators, Amnesty International has also made an analysis of the number of healthcare providers in Spain in Primary Care, a variable that denounces “stagnation” in recent years: the ratios of medical and nursing staff (per 1,000 inhabitants ) have hardly changed. In the case of male and female doctors, the per capita staff has gone from 0.74 in 2009 to 0.77 in 2018, according to their data, and even communities such as the Balearic Islands or Madrid have slightly reduced it. The nursing ratio, for its part, has also risen slightly: from 0.61 ten years ago to 0.66 in 2019. Again, only these two territories have slightly decreased it.

Faced with this generalized scenario of “backward movement” and even more so taking into account the health emergency of COVID-19, which can be replicated with possible second waves of the virus, the organization has launched a campaign to demand that the health authorities reinforce the National Health System, in line with what the Government used in the Congress Reconstruction Commission. “Now, more than ever, it is necessary to ensure that it has adequate resources and is capable of responding to the current and future challenge,” he explains in the report. Among other things, it calls for an increase in investment, prioritization of Primary Care, enabling “consultation and participation” mechanisms for health personnel and the population, or reinforcing accountability mechanisms.