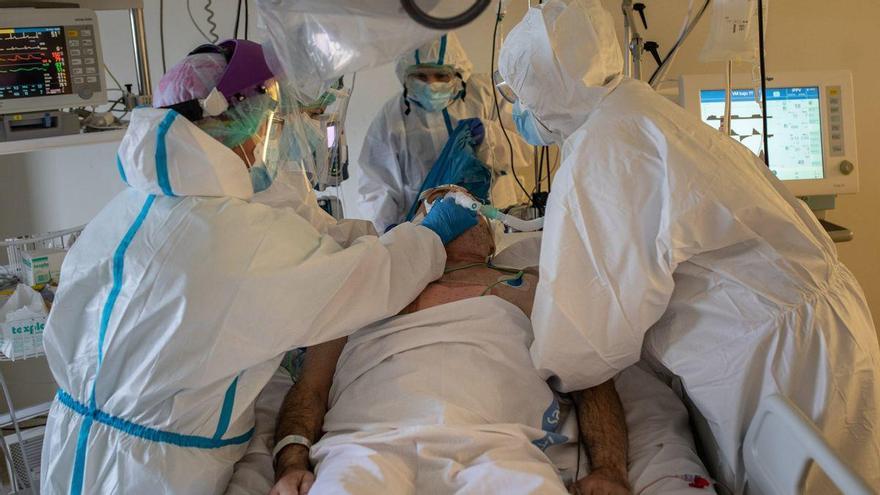 “This is not over. We have been there for almost a year and we do not see the end.” Conchi Tarancón reflects aloud as he walks through the doors of the Intensive Care Unit (ICU) of the Virgen de la Concha Hospital, where she works as head of service. Since March of last year, the pandemic has not given him a truce; not her, not the rest of the team. “You go out of a wave and you get into another,” she explains resigned to the presence of LA OPINIÓN-EL CORREO DE ZAMORA, from the same publishing group, Prensa Ibérica, that this newspaper, which today offers the first of three deliveries on what it is occurring within the critical zone. Meanwhile, to the right of the person in charge of the area, four health workers attend to a patient who can barely move. The image impresses and is repeated in the rest of the boxes. Almost all of them are occupied by COVID patients.

The ordinary ICU where you are Conchi Tarancon It is located on the fourth floor of the Virgen de la Concha, but those responsible for the hospital have already had to set up another extended unit in the lower area. Thus, the twelve patients who currently require intensive care are distributed between both spaces, which add up to a capacity for 19 patients. The latent fear is that the increase in infections will exceed that capacity and force drastic measures, such as doubling the beds in the boxes. “Anything can happen.”

Meanwhile, the minute by minute of the ICU keeps the intensive care team from thinking too much about the future. In this “U” -shaped room, attention follows, bustle is the norm, and patient monitoring is constant. Nothing is left to chance: “On a normal morning there are usually five nurses, three assistants and five doctors, all intensivists“, explains Tarancón, who recognizes” exhaustion “, despite the positive attitude that is perceived in the environment, and who accounts for a reality that is perceived without difficulties at first glance:” Yes, almost all of us are women. ”

This circumstance contrasts with the profile of those admitted to the Zamora ICU. Since the beginning of the pandemic, This unit has taken in 120 patients; 80% men. Virtually everyone who now occupies the boxes was infected in “family gatherings” during Christmas, the focus par excellence of a third wave that has not yet reached its highest peak in intensive care: “Now you see admissions to the emergency room, and in ten or twelve days we will have this to the full, “says the head of service, who has few doubts about what lies ahead.

At the moment, the Zamora ICU has treated about 120 patients since the pandemic began. In the first wave, one in two died; After the second, the work and experience with the virus of the toilets has managed to reduce that number by half and three out of four patients succeed. Even so, the percentage of deaths remains high, and it is difficult for professionals to leave out personal involvement. “You see people in their 50s who are going to leave and you can’t do anything. It is very hard“slides a nurse.

Tarancón clarifies that the bulk of mortality is registered in the ward, where people “older and with previous pathologies” are admitted. People who are going to need a respirator and who have not improved after previous treatment enter the ICU. The mean age of patients with coronavirus in intensive care is around 64 years old, although the youngest to go through there barely I was 35 and the oldest was 81. In addition, the average stay is around two weeks, but some patients have been fighting for their lives for more than 70 days in the “U” shaped room that many will not even remember. The health workers clarify that confusion reigns among the patients who wake up; many “find it hard to get back on track.”

The lucky ones who get ahead will have problems to retain some detail of a few weeks in which their life hung by the thread that holds the Virgen de la Concha sanitary team. This Tuesday in particular, none of the COVID patients in the ICU located on the fourth floor was awake. Located in individual boxes on the sides of the room, patients use the respirator or tracheotomies performed by professionals to continue. All of them, surrounded by cables and controlled to the second.

The tool for this surveillance are monitors that are on an elongated table, strategically located in the middle of the room. There are placed the nurses and the assistants, components of a staff that “is working many more hours” than it should: “It has to be like this if we want this to go ahead“, underlines Tarancón, who turns his eyes quickly towards the patients, the priority beyond the work circumstances:” Age is very important to know how patients will evolve. Also if there is any respiratory pathology “, analyzes the head of the service, who accumulates 25 years in the specialty and 6 as head of the ICU in Zamora.

In the background, the activity that is perceived in the different areas of the ICU is striking. The workers enter and leave the boxes almost constantly, and inside these small rooms, almost all with a closure that isolates them from the main room, the toilets work completely protected with the overalls, the screen and the rest of the relevant garments. Only a few minutes in this way, in a space where the temperature is already high in itself, are enough to hate the suit; professionals have been dealing with it and the pressure since March.

Regarding the organization, the plan outlined in the Virgen de la Concha seeks to concentrate the ordinary activity of the ICU during the day so that the night is a time reserved for emergencies. With this occupation, there are always: “We got very little rest, and in March that came down to nothing“reveals Conchi Tarancón, who maintains that the team has been adapting to the circumstances to be able to live with a pandemic that has doubled and tripled the usual number of patients in their area.

What is more difficult to get used to is “seeing familiar people”, people who, for the most part, are 50, 60 or 65 years old and who enter the ICU to fight for their lives just a few weeks after having enjoyed a meeting family or dinner, not suspecting that they could become the next to be intubated. “You don’t understand how people have led a normal life at Christmas. You could see it coming“Tarancón laments.

Beyond the ICU, the manager of the Healthcare Complex, Montserrat Chimeno, alerts on the increase in hospital occupancy, and assumes that “scheduled activity will have to be suspended.” “We dragged many months of total and dedicated assistance to this pathology, and there is physical wear, but especially psychological,” acknowledges the person in charge.

At the exit of the ICU, Conchi Tarancón points out some beds set aside in an adjoining room. There they await the foreseeable increase in UCI admissions when the third wave becomes strong in this plant. Again, the health community will have to serve as a shield.