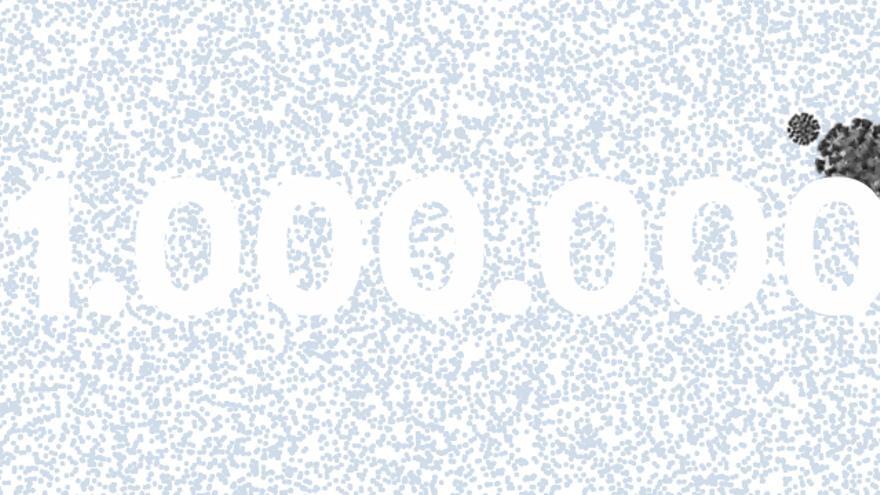 ⎯ Above here, the cases that we detected only in the last week

⎯ So far, those that have been confirmed in China 🇨🇳 since the pandemic began

⎯ So far, confirmed cases only in Madrid

⎯ The 440,000 confirmed cases in Italy 🇮🇹, the European country where the first wave arrived faster

⎯ So far, the confirmed cases of Madrid and Catalonia

⎯ So far, confirmed cases in the United Kingdom 🇬🇧

⎯ And here, the confirmed cases until October 1 in Spain

⎯ And here, the confirmed cases until October 1 in Spain

More than a million people have been diagnosed with Covid-19 since the beginning of the epidemic in Spain. This figure represents 2% of the Spanish population.

These cases only show a part of the total number of people who have passed the virus since the beginning of the epidemic: those who have been confirmed with a laboratory test

That is, not all the people who passed the virus with mild or no symptoms between February and June and those infected who were not detected by the tracking system in the second wave are not included.

In the first wave (until June 21), 240,000 cases were confirmed in Spain, although there were surely many more. The seroprevalence study, which measured the presence of antibodies in the population, indicated that we had only detected 1 in 10 infections.

With the end of the de-escalation and the state of alarm, the Government called at the end of June to “go out into the streets” and “reactivate the economy.” At that time, barely 2,500 cases were detected each week. “We have defeated the virus,” said Pedro Sánchez.

In the first wave we barely saw the tip of the iceberg: the most serious cases or with clear symptoms. Since the beginning of summer, the detection capacity and the greater availability of tests show us a much more realistic picture of the virus contagions.

With this increased detection, the trend changed in the first weeks of August. In just two weeks, 100,000 cases were added to the total number of infections detected during the epidemic.

One in four positives in the summer were among 15-29-year-olds, where the largest outbreaks related to seasonal work and nightlife were recorded.

As of September 1, half a million cases had been detected throughout Spain since the beginning of the epidemic. More than half of them already correspond to the second wave. “Things are not going well, every day we have more transmission”, Fernando Simón acknowledged at the press conference.

With the figures from the beginning of September, Spain became the second country in Europe (after Russia) to exceed half a million confirmed cases on the continent. It took 6 months of epidemic to reach this figure.

In the middle of September, the second wave accelerates in Madrid and the total number of infections in Spain already adds more than 600,000 cases detected by biological test.

The situation in Madrid is out of control and the Community Government applies restrictions in 37 health areas in the capital. As of September 21, contagions from Madrid they accounted for 40% of those that were registered daily in Spain.

At the end of September we reached the first peak of the second wave in which more than 11,000 cases were detected per day. Approximately those shown between the next two lines.

Cases in a single day at the end of September

We started the month of September with 470,000 cases. Just 30 days later, we had already passed the 770,000 positive mark since the start of the epidemic in Spain. In the first wave, the confinement helped flatten the curve with speed. Three months after the start of the second, we have not yet reached a plateau.

In the first week of October, the epidemic gave a respite and there were signs of having controlled the speed of spread of the virus thanks mainly to the descent of Madrid.

On October 13, the lowest number of infections in a day was reported since the end of August: 7,000 confirmed cases.

It was all a mirage: just a week later, with half of the European countries in the second wave of the pandemic, cases were back up sharply in almost all communities. We have already exceeded 900,000 confirmed cases in Spain.

On October 21, the day we reached one million infected in Spain, we reached the absolute record of cases reported in a single day since the start of the epidemic: 17,000 new infections. A provisional record, as cases continue to rise and we have added 230,000 new cases in the last 3 weeks.