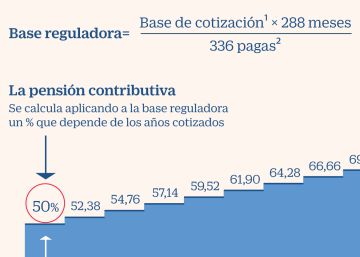 As in all recent years, in 2021 the conditions of access to the Social Security retirement pension change, as well as the formula for calculating the amount of the first benefit. Since January 2013, a profound reform approved in 2011 has been applied to reinforce the contributivity of the public retirement system (collect amounts more in line with those contributed) that will culminate in 2027. And each and every one of the years up to that date incorporates important changes that Those who reach retirement age must take into account, and that they will be enforced until a new reform of the system, which circumstances seem to make it inevitable, modifies them again.

In those fourteen years in which the transitional period of the 2011 reform unfolds, the legal retirement age will slowly go from 65 to 67; The temporary contribution requirement to have 100% of the pension will also change, from 35 years required in 2012 to 38.5 years of contribution to do so in 2027.

The 15-year contribution requirement is maintained to be entitled to a contributory pension (if they are not met, only a non-contributory pension will be dispensed by Social Security). But the contributions that were used until 2012 to determine the initial benefit, which were those of the last fifteen years, extend to 25 (although the Government now handles the option of extending them to 35 years, practically the entire working life). Given that the rise in the contributions to be considered to determine the amount is also subject to a transitional period, in 2021 those of the last 24 years of contributions will be computed, and the 25 established as a ceiling in the standard will already be required in 2022.

But what are the parameters of retirement in 2021, and how will the amount of the first benefit be calculated by the Social Security Treasury? From January 2021 it will be necessary to be 66 years old to access retirement, and the contributions of the last 24 years will be computed to calculate the economic amount that will be paid to the person affected by 14 payments.

In turn, 36 years of contribution will be required to be entitled to 100% of the regulatory base (pension), and 37 so that those who turn 65 and want to choose to leave the labor market and move to the state liability account.

The amount of the first pension, which from the first collection will be subject to updates decided by the Council of Ministers until the death of the recipient, with an average life of about 22 years at present, is the result of the contributions contributed as maximum in the last 24 years, to which a coefficient will be applied based on the years of contributions, with a maximum of 36, which is the minimum required to reach 100% of the pension.

The steps to follow to determine the amount are as follows:

1. Calculation of the regulatory base.

It is obtained in 2021 by multiplying the contribution base of the affected person (it appears on the payroll or salary receipt that the company for which they work gives employees each month) by 288 (number of monthly payments included in the 24 years counted), and divide by 336 (number of months of the same years plus the two additional ones corresponding to extraordinary payments). In 2021, the contribution base is practically the salary of employees, with a minimum that will be set at 1,108.3 euros, which is the SMI, and a maximum of 4,070.1 euros, the same that already existed in 2020.

2. The assessment of the previous years and the update.

The contribution bases of the last two years will be taken at their nominal value, since it is assumed that price fluctuations will not have caused much wear and tear on income in two years, at least in periods of low inflation such as the current one, with stability of prices.

But the values ​​to be considered as the contribution base of the previous 22 years (or those that have been quoted with the exception of the last two) will be those actually paid to the general fund of the system increased punctually with the inflation generated since the Payment until now, until the moment of causing a pension.

3. Coefficients of the assurance scale.

The amount obtained as a regulatory base is subject to the coefficients established by the insurance scale based on the years of contributions (minimum of 15 and maximum of 36) to obtain the exact pension. The coefficients set in the assurance scale for 2021 establish that 50% of the regulatory base obtained in step 1 is paid for the first 15 years, and that the payment will be increased by 2.38 additional percentage points for each additional year of contribution, up to the maximum of 100% of the base that is reached with 36 years of contributions. (See explanatory chart of the assurance scale).

4. The minimum and maximum limits.

This amount obtained must be between the minimum guaranteed by the system (if it is below it will be supplemented by the State), and the legal maximum established as a limit. If this threshold is exceeded, the excess will be lost: it is only possible to charge the cap for fourteen payments, which is 2,707.5 euros per 14, totaling 37,904.86 euros per year. The minimum is 851 euros per month (11,913.86 per year) if you have a dependent spouse. If you do not have a dependent spouse, it will be 689.65 euros per month (9,655.12 per year). And the result shows the pension to be received.

The final amount determined as the first pension, which can be calculated with the four steps outlined above, is already a child with a life of its own, and which as a subjective right of the recipient is preserved until death and has to be paid promptly by the Treasury of the Social Security or, failing that, by the State. From the beginning of its life, the retirement pension to which each pensioner is entitled will be subject to how many decisions on its hypothetical freezing or raising the governments decide.