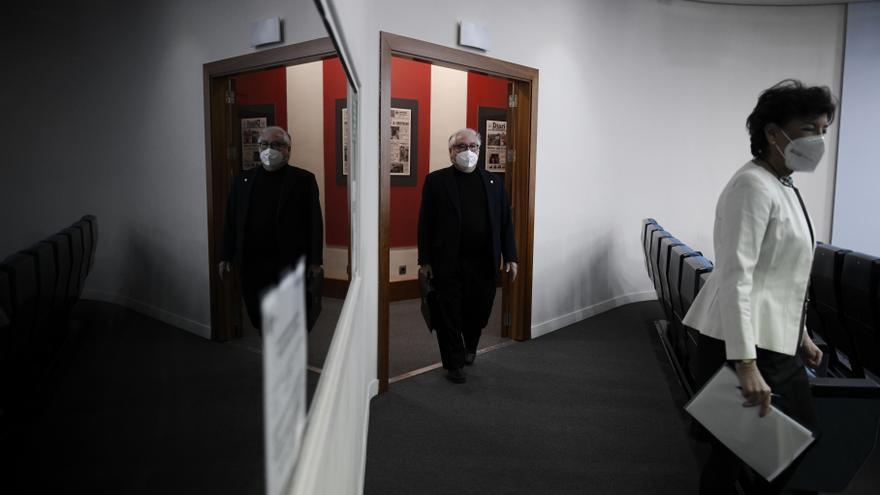 The European funds from the Recovery Plan associated with the crisis caused by COVID that the Government is going to allocate to Education will be used to digitize the entire system, including the University, to train teachers at all stages, to promote Training Professional and to improve the equity of compulsory education through the creation of new Early Childhood Education places or the reinforcement of specific support programs such as PROA.

The Ministers of Education, Isabel Celaá, and that of Universities, Manuel Castells, presented this Wednesday in La Moncloa the destination of these funds, an appearance that has not brought great news (all the measures had already been announced as they have been approved ), but that has served to obtain an overview of the use of this item, which amounts to more than 5,000 million euros between the two ministries. Also to confirm aspects that have been left out (all those not explicitly mentioned), such as a hypothetical drop in ratios, the measure most requested by teaching associations, or to announce the arrival at last of the 300,000 computers that Education announced that they would buy, that will reach some communities when the course is over.

"They have gone through 32 performances. We acquire computers for the entire course of time, not for one day," the minister justified. "That they arrive in Madrid in June does not seem so bad. We would have liked them to arrive earlier, but it could not be. Why? Because the administrative contract controls are such that they have brought us here. The companies that have they entered they have had to take their time. But it is already underway and it is extraordinary news, "he said.

The ministers have also spoken about the coming course, although without offering too many certainties. Regarding the mandatory stage, Celaá has announced that next week there will be a three-party meeting at the Sector Conference between Education, Health and the autonomous communities to outline the academic year. Among the questions to be resolved, if the blendedness is over, which has occurred especially in the last years of Secondary and Baccalaureate, and the use or not of masks, ventilation, etc.

This extreme seems clearer at the University. Minister Castells has maintained that, although it is not known at what point in the pandemic Spain will be in September, "we are going to wear the mask, we are going to open the windows and the distances are going to be maintained," he advanced. The minister is also clear, after the controversy of the first semester, that the exams will be in person this summer. As in the case of Education, Universities will talk about the course with the communities and the rectors, in this case during the month of August.

Regarding the limited duration of these aid as a whole, both ministers have insisted that the important thing is to open roads and that they continue later. "In 2024 we hope that the story does not end, some people will continue to live", has ironized Celaá. Castells has defended the mark that the programs will leave: "The 4,000 people who are going to re-qualify these years do not disappear, we have managed to install teaching and research capacity that they will develop in the future. The same happens with digitization, it is a total transformation of the system ".

Both leaders have agreed to point out the importance, in their opinion, of all these programs. "In my long career I have not known such an ambitious plan that combines innovative ideas, principles of equity and resources. It is a field in which I have done a lot of research and it is important," Minister Castells has praised the Education projects. Celaá has defended that "the profound reform of the educational system" that the Government undertook last year will be "definitely boosted" with the Recovery Plan.

Digitize the system from top to bottom

Whatever the situation next year, both ministries contemplate that at some point, more immediate or less, they will have to resort to some type of distance learning, and they are preparing for it. A good part of the recovery funds will be dedicated to digitizing the entire educational infrastructure, from schools to universities. Education will allocate 1,496 million euros to this, Celaá explained, to install and maintain 240,000 interactive digital classrooms in three years (more than half of the 425,000 existing ones) that, among other things, allow distance learning in the event that Some of the students have to be sent home on certain days, as has happened this year. Teachers will also be trained so that they know how to take advantage of these classrooms.

The 300,000 devices (computers and tablets) that were announced at the beginning of the course have also been finally acquired to reduce the digital divide. The problem is that the devices will arrive with the course already completed, a fact that the minister has admitted is not ideal, but it has been the fastest possible depending on the administration's hiring rates. Universities will allocate 142 million euros to similar improvements.

Another leg of the Government project. Education is going to take advantage of part of the funds to promote one of the measures signed in the Government pact between the PSOE and United We Can, the increase in the supply of public places of the first cycle of Early Childhood Education, which covers between zero and three years . To this end, 670 million euros will be allocated to the creation of 60,000 new places, either by opening new lines in existing schools or by creating new centers. The figure still falls short of the 240,000 that organizations such as Save the Children estimate necessary to universalize this stage, which in Spain is around 40% of schooling compared to 99% of 3-6.

There will also be a reinforcement of the support program for students with educational needs PROA, which has great acceptance among teachers. With the 320 million euros dedicated to this issue, PROA will reach 2,500 more centers, according to the Government. A thousand personal and family support and guidance units for students with difficulties will also be created, which will follow families and their children during the course.

Universities include in this section the increase in university scholarships that the ministry has already announced and implemented (an increase of 22% in the starting line and 90,000 most favored students), although in this case the funds do not come from the European plan.

Perhaps the jewel in the crown of Universities. The portfolio of Castells has already approved three ambitious aid programs for the training and mobility of university teachers, endowed with 387 million euros, most of its extra budget with European origin. There are three programs for young doctors, for established university faculty and for attracting international talent with a duration of three years. There will also be digital training for teachers, both university and Primary and Secondary.

The boost to VET

The last of the Education measures, perhaps the least mediatic although it eats up almost half of the budget, 2,075 million euros. A third of this amount will be invested in accrediting the job skills that three million Spaniards have obtained through work experience but are not recognized. Celaá has encrypted the ambition of the program: in the last ten years the skills of 300,000 people have been accredited and his ministry now aspires to do so with ten times more in just three years.

The promotion of Vocational Training is completed with 400 million euros for the modular training of 700,000 workers and unemployed, 200 million for the creation of a network of centers of excellence and 254 million to create 135,000 new VET positions, among other minor measures .