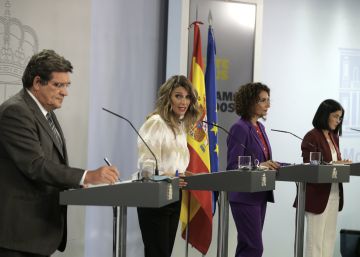 Today the Government ratified the agreement reached with business and trade union organizations to extend the special conditions of the temporary employment regulation files (ERTE) until next January 31. These are the new rules that will govern this tool for the next four months:

What companies can benefit from one of the ERTE with beneficial conditions due to the pandemic?

Companies that are experiencing economic difficulties caused by the pandemic may request some type of subsidized ERTE. This will cover the vast majority of companies, although, depending on whether they already have a previous ERTE, the sector in which they carry out their activity or the type of restriction by which they are affected, they may benefit from one modality or another, with their corresponding exemptions ranging between 50% and 100% depending on the case.

What happens to all the companies that now have a force majeure ERTE due to the first measures against the pandemic?

These ERTEs are all automatically extended until January 31 next and workers keep their benefits. However, new business exemptions are established that will only benefit a part of these companies. Specifically, according to the definition included in this agreement “those especially affected by the pandemic”. These are defined by having a high rate of coverage by ERTE and a low rate of recovery of activity and they carry out an activity that is classified in one of the codes of the National Classification of Economic Activities (CNAE-09) included in the agreement (see full list at the end of this information).

Companies that are particularly affected and that will receive greater exemptions may also be included in this section, those “whose economic activity depends mainly on companies whose CNAE are included in the standard or are part of its value chain.”

Likewise, these same exemptions from business quotas will apply in the event that companies in the protected sectors or the value chain initiate an ERTE for economic, technical, organizational or production reasons after the completion of an ERTE of force majeure.

How can a company prove that it is part of the value chain of another that it belongs to a protected sector?

These companies must submit to the corresponding labor authority between October 5 and 19 the request for declaration as dependent companies or members of the value chain of another company. And it will be understood that the companies whose turnover during 2019 was generated by at least 50% in operations carried out directly with “companies especially affected by the pandemic”, as well as those companies whose activity real depends indirectly on them.

New ERTE due to impediment or limitation of activity

The temporary files called ‘regrowth’ for companies that saw their activity suspended due to the restrictive measures adopted by the outbreaks of the pandemic, which were created in the previous agreement that regulated the conditions of the ERTE from June 30 to September 30 , and which had been used since July 1, become two new forms of ERTE.

The first of these modalities is the ERTE due to disability for those companies in any sector or activity that see prevented the development of its activity as a result of the new restrictions or measures adopted as of October 1, 2020, both by national and foreign authorities. These companies will have an exemption in their Social Security contributions during the closing period and until January 31, 2021, which will be from 100% of the business contribution during the closing period and until January 31 if they have less than 50 workers and 90% if they have 50 or more workers.

The second of these modalities is called ERTE due to limitations, intended for companies that only see limited the development of its activity in some of its work centers as a result of decisions or measures taken by Spanish authorities.

In this case, the exemptions in the contributions to the Social Security for suspended workers, they will be decreasing between the months of October 2020 and January 2021 based on the following percentages: 100% in October, 90% in November, 85% in December and 80% in January, if the company has fewer than 50 employees. If you have more than 50 workers, the percentages reach 90%, 80%, 75% and 70%, respectively.

The commitments to safeguard employment are maintained during the six months after the end of the ERTEs that were acquired in the regulations of March 17, and June 26, where the previous special conditions for temporary suspension of employment were regulated. In this way, all active ERTEs maintain this commitment. But, in addition, a new period of six months of safeguarding employment is established for companies that take advantage of a new exonerated ERTE.

If there is a commitment to maintain a previous job in force, the start of the new safeguard period will begin when the previous ERTE has ended.

People affected by an ERTE will have their right to collect unemployment benefit restored up to 196 days if they were dismissed for an objective cause – individually or collectively – or for any reason, provided that the dismissal is declared unfair, during the year 2021, or if your temporary contract expires within this year.

The calculation base for the benefits will remain at 70% of the regulatory base, so the cut of this base is eliminated, which determines the amount of this aid to 50% from the seventh month of collection, as happened until now . In this way, workers who have been in an ERTE for more than six months will not see their benefit reduced from the 181st day of collection.