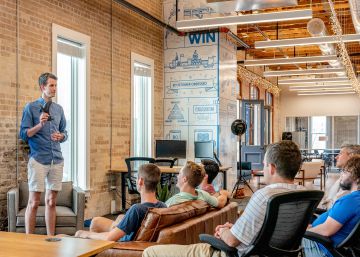 There is probably no single definition of what talent is, or how it manifests itself. Is it the career path? The academic record? Certainly, but also much more. The profiles called to lead the future “must be complete, master several languages ​​and stand out at the competence level, they must know how to communicate and possess leadership and teamwork skills, without forgetting a great ambition to have a positive impact on the world. “Says Ramón Rodrigáñez, co-founder and COO of Nova Talent, the human resources company that has just published the list of the brightest young people in Spain, because” it is very easy to count the bad things, but there are also young and brilliant people doing fantastic things ”.

The Nova 111 List It has chosen, among 1,625 candidates, the 10 talents under 35 years of age in the 11 most relevant areas of the economy: technology; health and life sciences; entrepreneurship and startups; Social impact; politics and public sector; finance and investment; telecommunications and media; Sales and Marketing; strategic consulting; engineering and energy and legal services. Young people with a very high preparation, high potential and a relevant professional career despite their youth, and who for the most part are grouped around Madrid and Barcelona, ​​but also, to a lesser extent, Valencia and Seville. Likewise, Nova Talent has recognized with a special mention Leire Larracoechea, lawyer and director of the Pro Bono Foundation, dedicated to facilitating access to law and justice for non-profit organizations.

The objective of this initiative is “to identify, make known and empower the 111 most talented young people in Spain, who will now benefit from a year of acceleration in their professional careers,” explains Rodrigáñez. “We will accompany them with a networking program that will be essential for the development of their maximum potential and that tomorrow they can become leaders in the field they want.” They will also enjoy the accompaniment of a professional coach and a training program that, with the help of SelfmasteredIt will help them to get the best version of themselves through aspects such as food, sports and managing their schedules.

Delia Rodríguez is one of these people. This 29-year-old industrial engineer, graduated from the University of Valladolid and one of the 10 winners in the social impact vertical. He started working at Procter & Gamble and became familiar with the financial area; but I also wanted to make an impact in a positive way, and from there arose, for example, the Ausonia campaign with the Spanish Association Against Cancer. “That’s where my turning point came, because I liked the business world, but with a key focus on social and environmental impact,” he recalls.

Thus, Delia ended up joining Ashoka, a leading international organization in social entrepreneurship: “I believe that the separation of sectors must be broken … Ashoka works with entrepreneurs to accelerate them, connect them with the world and maximize their impact.” The project in which he is working seeks to build collaborations between different areas (public, private, social, communication, academic and others) around four global axes: climate change, gender, technology and humanity and new longevity, a point at which they have established a partnership with the New Longevity Center in Stamford: “We are doing research here, because there is still a lot to know. But they want to change the entire paradigm of aging, because this is a stage of 20 or 30 years where much can be given back to society and, why not, keep learning”.

The Nova Talent initiative, which will now continue with similar lists in Sweden and Italy, before moving to other European countries in 2022, aims to help reverse the exodus of young professionals who are looking for far better job alternatives. And it is that, currently, there are more Spanish researchers residing abroad (RAICEX, for example, it has more than 4,000 members, but not all of them are affiliated with this organization) other than foreigners residing in Spain (about 1,900): “We highly value international experiences. But it is evident that, in general, talent in Spain does not find the necessary opportunities to develop its potential. And it’s a shame, because we live in a world in which talent is the most important factor in the economy ”, reflects Rodrigáñez.

“This is a very good initiative that gives visibility to Spaniards with very different profiles, but who work for specific causes. What happens is that we do not have an ecosystem as developed as there may be in other places, and that can slow us down when it comes to launching new projects or taking a little more risk ”, says Arturo Goñi, a 32-year-old industrial engineer selected as one of the winners in the finance and investment vertical. The jury of the call has had the participation of experts in each field from companies that have supported this call, such as Novartis, Ashoka, Jobandtalent, Bain & Company and Fever.

The human resources expert María José Basa wonders if, perhaps, is not the time to change the concepts of “retention” and “flight” for that of “attraction”: “Employees are attracted with training, with good projects and with challenges, plus a good compensation package tailored to your needs. Perhaps it is the moment to begin to conceive incentives for innovative ideas, for collaboration, for the performance of transversal teams, for transparency, the identification of opportunities for improvement and profitability in initiative committees ”, he argues. For Basa, a company is always more profitable and productive if it has motivated employees, and the more people do what they like, the more possibilities the company will have to increase its productivity and win market.

One of the most frequently debated aspects when talking about this retention of talent is the absence in Spain of stable and continuous support for research that sets long-term objectives, safe from political ups and downs and capable of offering conditions more attractive to researchers generated by the Spanish academic system. Thus, the Society of Spanish Scientists in the United Kingdom (CERU / SRUK) recently published the report For an innovative country, which includes a series of recommendations to improve the Spanish Science, Technology and Research System (SECTI), among which aspects such as the need for a State pact for R + D + i, the reduction of bureaucracy and the reinforcement of the research structures, the promotion of public-private relations and the internationalization of the Spanish system.

According to this report, “it is essential to tackle phenomena that impair their ability to attract, return and retain talent, including inbreeding in the personnel selection and evaluation processes.” Difficulty in reconciling personal and professional life, the feeling of lack of support at an academic level or job instability in the sector are some of the causes that point to generators of stress, anxiety or depression among researchers. And, at the origin of all the problems, is “the well-known and arch-claimed lack of funding, which leads to loss of stability, means and conditions and, finally, to the flight of talent, as well as the inability to retain and attract it” , highlights José Pedro Manzano, Spanish researcher at the University of Nottingham and member of CERU.

Regarding the research career, Manzano recalls that, although the number of doctorates has increased considerably over the last 10 years, the system is not capable of absorbing them, not only due to lack of funding, but because “there is a notorious lack of alternative careers to the academy and training of doctorates in transversal competences. It is necessary to take advantage of the versatility of the doctor and promote new specialized profiles in education, dissemination, management and design of science-based projects (…) and, above all, transform the results of research into technology-based companies or products and services for society”.

The diffusion and dissemination abroad of the Spanish research centers and lines is another of the deficiencies in which the Spanish researcher affects, something that goes through aspects as basic as keeping updated (and in English) the content of the institutional websites, information from research groups and social networks, strengthen Spain’s position as a leading Spanish-speaking university destination “and ensure that our calls for funding and employment also reach international channels such as EURAXESS Jobs Spain, and offer support to applications from abroad (such as, for example, validations) ”.

But a research reform in Spain should also address aspects such as inbreeding, the modernization of accreditation systems and, of course, the improvement of working conditions. “73% of university faculty teach at the university where they did their doctorate. The selection process must be fairer, public, transparent and as standard as possible at an international level ”, asks Manzano, who is also a member of Talent for the future. The Spanish accreditation system, with structures such as ANECA, is considered too rigid and inefficient and makes it difficult both to attract talent and the return of those who are abroad.

Manzano ends with a reflection: “It is not feasible to present ourselves as an alternative to the United Kingdom if coming to Spain always implies losing in areas as essential as salary, resources or family conciliation … The minimum to be competitive is to offer stability to the research staff and projects, as well as updating salaries. And understand the human magnitude of all this: we want to attract people, sometimes entire families, to our country. We must assure them that here they will be able to have a good quality of life, and explore measures to help them find housing, transportation and family conciliation ”.